The relationship between field intensity and signal level should be understood by all RF technicians.

On the other hand, the signal level across the antenna terminals — or at the input/output of a receiver or stage of a system — usually is specified in terms of volts (V), millivolts (mV) or microvolts (µV), or decibels referenced to 1 milliwatt (dBm) or 1 watt (dBW). Actually, the terms dBm and dBW are used to represent power levels but easily can be converted to voltage as long as the system impedance is taken into account. For example, most RF technicians and engineers know from memory that 1 microvolt (1 µV) is equivalent to -107 dBm in a 50-ohm system. This article will help you to correlate the field intensity at the antenna to the signal level at the input to the receiver in practical situations.

Figure 1 shows a transmitter connected to a half-wave dipole antenna and a receiver connected to a half-wave dipole antenna. The transmitter power is 1 kilowatt, or 1,000 watts. For this example, assume that the line losses are zero. The distance between the two antennas is 1 mile. The formula for calculating the field intensity in volts per meter, shown in Equation 1, assumes free-space propagation. 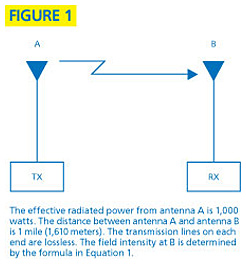 Since frequency is not part of the formula, we must assume that the calculated field intensity is independent of frequency. Plugging the numbers from the example above into Equation 1 yields a field intensity of 0.1375 V/m ( 137.5 mV/m) at point B, the receiving antenna.

Field intensity often is expressed in terms of decibels referenced to 1 microvolt per meter and is written as dBu. That is, 0 dBu is 1 µV/m and 6 dBu is 2 µV/m. When the field intensity is stated in dBu it is easier to it convert to a signal level across the antenna terminals — this is done by simply adding or subtracting the antenna factor in dB/m. The formula in Equation 4 can be used for this purpose.

Further suppose that the antenna is connected to the receiver through a coaxial cable that has a loss of 2 dB. Assuming a signal level of 25 µV at the antenna terminals, what is the signal level at the receiver input? Table 1 provides a handy reference for making that determination. The gray section of the table correlates multiplication factors with equivalent decibel increases in power or voltage. For example, the first figure in the table indicates that a 25% increase in the power level equals an approximate increase of 1 dB. A 25% increase in the voltage level represents a 2 dB increase.

Meanwhile, the blue section of the table shows that the reciprocal of the multipliers in the gray section of the table will produce the same change in decibel level, but in the opposite direction. According to Table 1, a 2 dB signal voltage loss in the transmission line would translate to a multiplication factor of 0.8. Thus, a 25 µV signal level multiplied by 0.8 is equal to 20 µV at the input to the receiver.