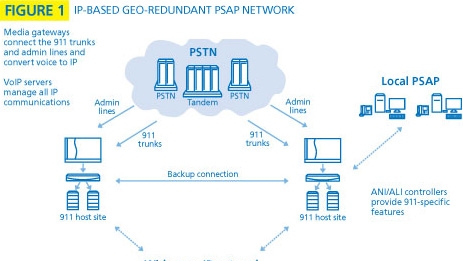 It probably will take a few years before the next-generation 911, or NG 911, standard transforms the public-safety answering point (PSAP). Call-taking systems that can receive text, video and other data formats from the public, along with voice calls, won’t make deep inroads until the public-safety sector completes standards for managing that inbound information.

In advance of the next-gen future, though, emergency communications officials are showing an increasing interest in Internet protocol, or IP, the technology foundation of NG 911. “More often than not, the systems people ask about are those based on IP,” said Mahendra Soneji, vice president of product marketing at PlantCML, a PSAP technology vendor in Temecula, Calif.

Some 911 districts have implemented systems that convert incoming analog calls into IP packets and transmit that data over private networks. This technique allows the districts to transfer calls, callback numbers and location data among different physical locations and, sometimes, among different jurisdictions. District officials using IP in this manner say the technology saves them money. They also say it helps them operate more robust networks, better provide for disaster recovery and gain greater flexibility in managing calls.

The Elmore County, Ala., E911 Board was looking for all those benefits in 2002 when consultant Lee Moore, a former board member, started investigating IP-based solutions. The county had four primary PSAPs, each with a separate call-taking system, and a secondary PSAP whose calls were transferred from one of the larger facilities. Each primary facility had its own trunk line from the local telephone carrier, call switch and computer system.

That setup left the county with the same problems that afflict many PSAPs operating in the traditional circuit-switched world. For one thing, all those switches were expensive to maintain, Moore said. And each facility was isolated from the others. If one facility became inoperable, routing its traffic to another center was an awkward process, and the center receiving the calls might not get the corresponding automatic location identification (ALI) data.

Also, if a 911 district wanted to build a standalone backup PSAP, it had to install a separate call switch there. “It may have sat there idle for years before you needed to turn it on,” Moore said. “You were never really sure that it would work. You had to pay extra for the trunking to go to it.”

Working with several vendors, Moore helped to develop a solution. Each of the five PSAPs now uses an IP-based call-taking system purchased from PlantCML. Instead of operating four switches, the 911 board covers the entire county with two. Because it requires less hardware — and because many of its components consist of off-the-shelf technology — the new system cost less to build and is cheaper to operate than a system based on circuit-switched technology, Moore said.

The two switches are installed at different sites, and each receives half of the 911 circuits for the county. An Avaya gateway converts incoming analog calls to IP; meanwhile, a private fiber-optic network connects each of the PSAPs to both switches and to each other.

Besides reducing costs, the new arrangement also provides for business continuity in a disaster, said Moore, who also has helped several other 911 districts implement IP-based solutions. “We increased the survivability of the system, because half of the trunks now exist at a completely separate facility.”

If one of the PSAPs stops operating, the system automatically routes its calls to another facility. If someone calling from a cell phone travels from one jurisdiction to another, the first PSAP can easily pass the call, with the callback number and location data, to the second.

The IP-based system also lets the district establish a temporary call-taking position in any of its facilities — essentially, anywhere there’s an Ethernet jack connected to the private network. The county has two portable call-taking positions, built into ruggedized suitcases, that an operator can plug in wherever it’s needed. “In a matter of five minutes you could have a fully functioning 911 position working,” Moore said.

The Indiana Wireless Enhanced 911 Advisory Board chose an IP backbone as a cost-effective way to provide enhanced-911 (E-911) service to wireless callers. Back when it used a circuit-switched network to support wireless service, the board was paying for approximately 1,000 circuits and 18 routers, said Ken Lowden, executive director of the statewide organization. Then a consulting firm hired by the board suggested a move to an IP-based system. “We could lower our costs and we could provide faster, better and more accurate service — with better redundancy — if we went to an IP network,” he said.

The board contracted with INdigital Telecom in Fort Wayne, Ind., to build and operate the network, which provides services to 137 PSAPs across the state through 11 wireless carriers.

Today, a call from a wireless phone travels from the cell tower to a single mobile switching center, and then on to either of two tandems, one located outside Indianapolis and the other in Fort Wayne. “At the tandem, the call is converted from traditional telephony, or time division multiplex, to IP,” said INdigital CEO Mark Grady. The tandem then routes the call through a mesh of 10 switching nodes to the appropriate PSAP.

At most PSAPs, the system converts the call from IP back to analog, the format that the legacy call-taking system requires. “There are some [PSAPs], though, for whom we convert it to an ISDN protocol, and there are others that receive their calls directly via native IP,” Grady said. “They have a call-taking agent that runs on a PC, or in a server farm, that terminates the call and presents it to the call-taker.” The board chose this whatever-they-need strategy because it didn’t want to force PSAPs to buy new equipment to accommodate the network, he said.

The IP solution has proved cost-effective, Grady said. “We’re running the network and all of its connections for a dime per [wireless] subscriber per month.” It’s also resilient because, like any IP network, it can continue to move data from point A to point B even if one or more of the intermediate nodes fails, he said.

The statewide network also is paving the way for new, next-gen-type applications, Lowden said. “People believe today that they can text-message 911. That’s not true, but we’re close.”

INdigital soon plans to pilot an application that can be used to send text messages to a PSAP in Indiana via certain mobile phones, Grady said.

Although interest in IP for public-safety telecommunications is growing, there isn’t yet a widespread movement to replace customer premises equipment with IP-based systems. “A large part of our customer base is looking for products and solutions that support traditional interfaces,” said PlantCML’s Soneji. The company offers traditional systems that can be upgraded to support IP interfaces, as well as systems that support a mix of traditional and IP telephone interfaces, he said.

PSAPs aren’t adopting IP technology faster in part because some officials misunderstand the concept, said James Cavanagh, knowledge-transfer agent at the Law Enforcement and Public Safety Channel, an online education resource headquartered in Atlanta. “When we talk about IP technology, we talk about the Internet, and that’s the Wild, Wild West.”

Concerns about hackers on the Internet are real, of course, Cavanagh said. That’s why IP-based 911 systems use private networks. Building such a network in-house is not rocket science, he said. “Enterprises have been doing it for a long time.”

Public-safety officials who don’t want to build their own IP networks can choose instead to lease the communications capacity. “A number of our channel partners or systems integrators provide IP networks,” said Soneji. “PlantCML also provides hosted systems and managed services.”

Whatever advantages they might seek from IP today, PSAPs should start using the technology as soon as possible, to prepare for the day when full-blown NG-911 becomes available, Cavanagh advised. “Make a decision today that you will begin the transition of your public-facing side — the 911 side that the public sees — five years from today,” he said. “In the next five years, however, and as quickly as possible, you will transition all of your internal systems to IP.” (See So close, yet so far.)

For example, while employees continue to field calls from the public on existing equipment, PSAPs should replace the phone used for internal communications. The replacement unit might be a VoIP phone, but it really should be a wireless smart phone, Cavanagh said. “And I would authorize and encourage people to use it as their personal communications device, to make it ring at their home and their office,” he said. Employees should use smart phones to communicate with supervisors, to send e-mails and to transmit videos, if practical, he added.

The goal is to transform the culture of the PSAP to one where employees know how to take full advantage of IP-based technology, “because that’s where we’re headed,” Cavanagh said. 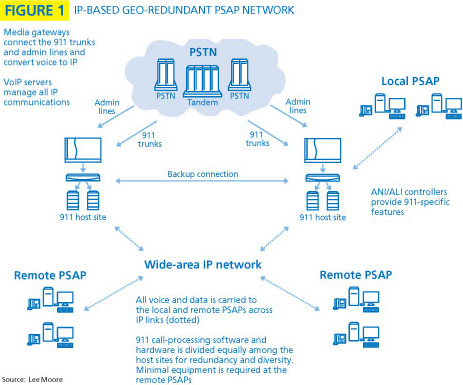