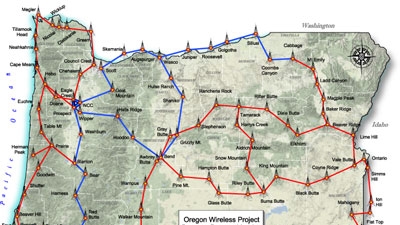 The network, dubbed OWIN, eventually will replace 80% of the state’s public-safety infrastructure with a 700 MHz microwave system.

The Oregon Wireless Interoperability Network will be far-reaching when it comes to improving public-safety communications throughout the state, said Steve Noel, the statewide interoperability coordinator. The network, dubbed OWIN, eventually will replace 80% of the state’s public-safety infrastructure with a 700 MHz microwave system.

“The OWIN project will upgrade the existing systems with an interoperability layer so emergency responders from different agencies and jurisdictions can talk to each other directly and immediately,” Noel said.

Noel said the OWIN project attempts to leverage state public-safety interoperability communications grants by building a joint microwave infrastructure. Sharing infrastructure spreads infrastructure buildout costs across several agencies, so “we can share the towers, share the buildings and the microwave network,” he said.

Thus far, OWIN has completed for 680 miles of microwave pathways linking 28 separate sites and 54 microwave radio installations. When Phase I of OWIN is complete, engineered sites will cover the 18 counties of western Oregon — where 80% of the state’s population lives and works. Noel said OWIN engineering staff has tested of the 700 MHz communication frequencies across the network to find out if it would be a viable solution for the state. 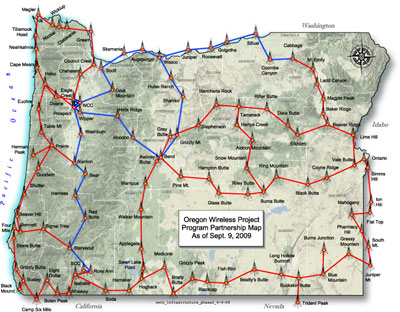 “We thought we’d have to go with a VHF system cause of the terrain in Oregon is challenging,” Noel said. “We found out through the testing models that 700 MHz would probably work although we may have to add a few more sites. Tests were expensive, but they’ll save a lot of money in the long-term.”

Noel said the network buildout depends heavily on developing partnerships with state, regional and local public-safety agencies. Collaboration and partnerships were crucial to getting the project off of the ground, he said.

“Creating partnerships has been a real challenge because we are working with local and federal governments, as well as other state agencies, and to try to put a system together and cover everybody’s desires and needs. … That is somewhat difficult,” Noel said. “But it’s also has been a huge benefit to our project because the more people we get involved the more people support [the project].”