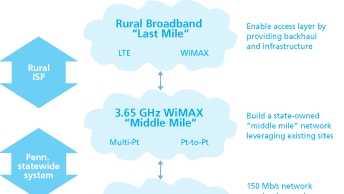 Pennsylvania hopes to unleash broadband side of LMR network.

Like many public-safety communications networks, the Pennsylvania statewide network uses microwave links to backhaul voice and 19.2 kb/s data traffic enabled by its LMR system, so the network is not dependent upon the availability of commercial T1 lines and the state does not have to pay ongoing leasing costs.

While the microwave network’s primary purpose is to transport LMR traffic, the infrastructure has the potential to carry any kind of traffic, said Charles Brennan, Pennsylvania’s deputy secretary for public-safety radio.

“It always struck me as odd that no one outside our little group that was building the radio system really understood that we had this vast network and what it could do,” Brennan said. “It was always just looked at as, ‘Well, that’s just part of the radio system, and it can only do radio stuff.’ We knew internally that it was a communications network that could do much more than just radio.”

With this in mind, Pennsylvania has applied for $28 million in stimulus money to layer a 150 Mb/s network over the public-safety network that commercial carriers could use for otherwise expensive “middle mile” transport into the most rural regions in the northern part of the state, which lacks any sort of broadband access. When the broadband stimulus guidelines mandated that priority be given to such underserved areas, Brennan said he and his staff immediately saw an opportunity to use the extensive microwave network infrastructure.

Indeed, even the largest commercial network — owned by Verizon — does not extend to the northern part of the state, which is characterized by challenging terrain and such small populations that carriers cannot create a profitable business model to serve the areas. However, because public safety must respond to emergencies in even the most remote areas, the Pennsylvania radio network — and its microwave system — extends into such locations. 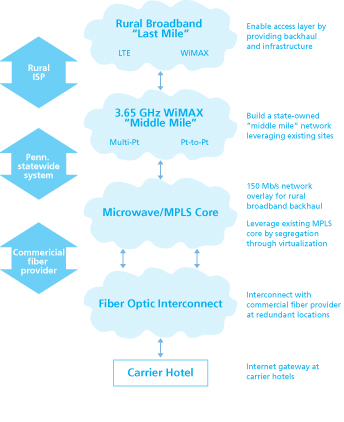 “As soon as this came out, we said, ‘We can do this,’” Brennan said. “Look at the places where we have no broadband in Pennsylvania — it’s all up in the north. Now, look where we have a network — it’s right in the same spot. It seemed like a natural marriage.”

Such a thought progression from Brennan is not surprising, said Kamal Ballout, Alcatel-Lucent’s assistant vice president of vertical markets solutions and technical sales, who has been working with the state to pursue the broadband stimulus project.

“There are two things I know for sure: One, [Brennan] has a very, very strong vision and conviction,” Ballout said. “And, second, he feels socially responsible to help wherever he can. He cares about the underserved people and the children living on these farms, and he has a lot of respect for them.”

Of course, with any wireless network, the hardest part is finding tower sites, building them and providing backhaul from them — processes that can be extremely time-consuming and expensive, as Pennsylvania experienced first-hand while building its LMR network. However, by leveraging the state radio system’s existing infrastructure, areas that normally would be out of broadband reach could be provided high-speed access.

Brennan noted that the state would not act as a direct provider of broadband to Pennsylvania residents. Instead, commercial operators — telcos, Internet service providers, cable companies, etc. — would be given a chance to lease “middle mile” bandwidth from the state that makes broadband access to remote areas possible.

“I think [commercial providers are] willing to partner with us, knowing that we’ve already gone through all of the aggravation [associated with bringing broadband to remote areas],” Brennan said.

“If we extend the connectivity, suddenly a business case exists for a carrier to offer services in remote areas,” he said.

Brennan emphasized that the state would only offer such “middle mile” access to locations where no commercial providers have made investments currently.

“Government competing with private business is not a good idea, and we certainly don’t want to do that,” he said.

In addition, the state plans to release an RFP seeking a company willing to manage the tower-leasing and broadband-leasing aspects of the business. Consideration of managing such tasks internally lasted “about five minutes,” after which state officials quickly agreed that third-party help would be beneficial, Brennan said.

“It’s really not our line of business, and we probably wouldn’t be good at it,” he said. “We’re also looking for expertise in properly managing the bandwidth for the customers, to make sure we’re saying all the right things. It’s such a new business for us that we want to make sure we are not going to market a product that no one will buy.”

From a technical standpoint, a key has been the introduction of multiprotocol label switching (MPLS) into the Pennsylvania radio network, Brennan said. Currently, MPLS — technology that automatically reroutes traffic in case a portion of the network is unavailable — is being used to enable greater reliability and bandwidth flexibility throughout the LMR network, which has a 50 Mb/s microwave system providing backhaul.

Like other entities that have applied for broadband stimulus funds, Pennsylvania is waiting for federal officials to announce awards after receiving notice that greater details on the project were needed, Brennan said. Although Pennsylvania needs just $28 million — with a $7 million match from the state — to make the project a reality, the proposal has no hope of being built without grant money, as the state struggles with finances in a down economy, he said.

However, Brennan said he is “extremely confident” that Pennsylvania will be a recipient of stimulus grant money for broadband.

“If they don’t award us the money, I can’t see anybody else getting money,” he said. “I think our project is just so solid, and having 90% of it done has to give us a leg up on anybody who’s going to try to do this from scratch.”

Brennan said he has “no doubt” that the Pennsylvania model can be used by other agencies to leverage ever-popular public-safety microwave systems to bring broadband to rural areas. In fact, some agencies appear to be pursuing a similar strategy, he said.

“If you look at some of the stimulus applications, there are states that are trying to build what we already have in place,” Brennan said.

Indeed, Ballout said an increasing number of public-safety agencies are turning to microwave systems for backhaul, so they can avoid the ongoing expenses and bandwidth limitations associated with leasing T1 lines from commercial carriers. However, such microwave systems provide “way more than we need” in terms of bandwidth for voice and low-rate data applications, Brennan said. Simply applying for the broadband stimulus grant money has altered the manner in which state officials view the LMR network.

“I think it opened people’s eyes to understand that we have this very, very valuable asset out there,” Brennan said.