Wireless Internet access using IEEE 802.11-compliant devices is one of the great technology success stories of the 21st century. By leveraging free spectrum and a standards-based solution, the computer industry created untethered Internet access for the masses. Better known by its industry name, Wi-Fi, 802.11 has given the cell-phone industry a run for its money, and most smart phones incorporate both Wi-Fi and cellular data services in one device. The purpose of this article is to provide a brief refresher on Wi-Fi (see also the February 2007 issue of Mobile Radio Technology) and introduce the newest version of the standard: IEEE 802.11n, a major enhancement that raises the top bit rate from 54 Mb/s to 600 Mb/s.

A brief history of Wi-Fi

Like many successful technologies, Wi-Fi was spawned by a pioneer group of hobbyists and true believers. Before there was wireless Internet access, there was a barren wasteland of spectrum called the industrial, scientific and medical (ISM) bands. ISM equipment is not used for radio communications, but radio frequency emissions are a consequence of ISM equipment operation. Examples of ISM equipment are industrial heaters, radio frequency welders, diathermy machines and microwave ovens. Until the 1980s, the ISM bands were considered unacceptable for radio communication because of harmful interference created by ISM equipment.

However, several companies and small industry groups petitioned the FCC to open these bands for communications and these advocates showed that low-power radios using spread spectrum modulation could coexist with ISM radiators. In 1985, the FCC issued new rules for radio communication in the ISM bands in Part 15. These new rules authorized radios to operate license-free in the ISM bands at power levels up to 1 W, provided the radios use spread spectrum techniques. In addition to ISM and Part 15 radio users, the ISM bands were and are used by vehicle-tracking services, amateur radio operators, licensed point-to-point microwave, and U.S. Navy fire-control radars. Part 15 radios use the bands on a secondary basis to these other users.

One of the first communications uses of the ISM bands was wireless data networking, but these early networks predated widespread use of the Internet, and solutions were proprietary. In 1997, the Institute of Electrical and Electronics Engineers published its first wireless Ethernet standard, IEEE 802.11. This first standard was crude, even by 1997 technology standards, and much less sophisticated than cellular phones of the era.

Nevertheless, the telecommunications industry lives and dies by interoperability standards, and this first standard was the key to widespread adoption of Wi-Fi technology. Of course, it didn’t hurt that the Internet was taking off at the same time and laptop computers were starting to achieve decent market penetration. The genius of 802.11 is that, because it is wireless Ethernet, its operation is largely transparent to the user and software applications that work on the wireline network work the same on 802.11 networks.

Because of FCC rules in place at the time, the first 802.11 standard was required to use spread-spectrum modulation, which limited bit rates to 2 Mb/s in a 20 MHz-wide radio channel. Over time, the FCC relaxed the definition of spread spectrum and then abandoned the spread-spectrum requirement altogether, although a maximum power density (in watts per hertz) is still enforced for certain frequency bands.

Major revisions to the 802.11 standard were published in 1999 and 2003, when orthogonal frequency division multiplexing (OFDM) was introduced in the 5 GHz and 2.4 GHz bands, respectively. The peak data rate in each band was 54 Mb/s, and this rate remained the state of the art until September 2009, when the 802.11n amendment was published. IEEE 802.11n employs several sophisticated techniques to boost the peak bit rate to 600 Mb/s. These same techniques are used with slight variations in WiMAX and cellular 4G networks. Thus, Wi-Fi radios are now every bit as sophisticated as the most up-to-date smart phones.

Table 1a> summarizes the most important 802.11 revisions published to date. IEEE 802.11 amendments that have been ratified for at least six months can be downloaded for free from http://standards.ieee.org/getieee802/.

IEEE 802.11n incorporates all earlier amendments to 802.11, including the medium access control (MAC) layer enhancements in 802.11e for quality of service (QoS) and power savings. The 802.11n amendment applies to both the 2.4 and 5 GHz bands.

The design goal of the 802.11n amendment is high throughput, up to 600 Mb/s in raw bit rate. This boost in throughput is achieved through a variety of techniques, including more subcarriers; improved forward error correction; reduced guard interval; multiple in, multiple out (MIMO) technology, and 40 MHz-wide channels. Some of these enhancements boost throughput at the expense of range, while others improve range. Let’s examine each, in turn. 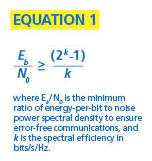 We should emphasize that the 600 Mb/s rate is the peak rate and only is available over short ranges when the multipath environment is favorable and 40 MHz of spectrum is available.