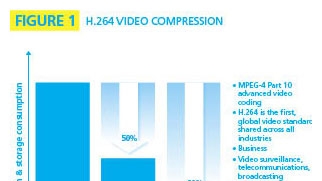 Video-surveillance technology has come a long way and barriers to adoption quickly are vanishing.

Surveillance videos are getting sharper, and the systems that produce and manage them are getting smarter. Megapixel and high-definition cameras, thermal-imaging cameras, video analytics and other advanced technologies are giving safety and security professionals greater power to protect property and lives.

For surveillance systems that operate on wireless networks, these new technologies also pose new challenges. It takes a lot of bandwidth to transmit high-resolution digital video or thermal images. And, of course, it takes a lot more bandwidth to transmit from 200 cameras than it does from 20. As surveillance systems grow more capable, they’ll appear in more locations, putting new pressures on available wireless capacity.

It’s easy to understand why the technologies that bring bright, clear episodes of “Dancing with the Stars” into the home also are making inroads in the surveillance market. Video recorded with a megapixel or HD camera contains much more information than conventional video. So, when you’re viewing a high-resolution video image and you focus on an object, that image won’t degrade into a pixilated blur.

Alan Salmon, special investigator/forensic video analyst at the Oklahoma State Bureau of Investigation and president of the Law Enforcement and Emergency Services Video Association (LEVA), first got a look at high-resolution video in action three years ago. The megapixel camera he observed at LEVA’s annual meeting had recorded a wide-angle view of a parking lot. Viewers who zoomed in tight on vehicles were able to read individual license plates.

Try that with a conventional camera, and you won’t learn much, Salmon said. “A lot of times, you can’t even tell what make of car it is, let alone the tag number.”

People often use the terms “megapixel” and “high definition” interchangeably, but they’re not the same, said Steve Surfaro, strategic channel manager and industry liaison at Axis Communications, a Swedish provider of network video systems with U.S. headquarters in Chelmsford, Mass.

“HD video cameras are associated with a specific standard and, therefore, have to maintain a certain frame rate, image quality and color fidelity,” Surfaro said.

While high-resolution cameras have been around for several years, the technology is only starting to make an impact on the security market. One reason is cost.

“The big problem initially was that a megapixel camera was something like $10,000,” said Salmon, recalling the units he saw three years ago. In contrast, prices for conventional video cameras range from less than $100 to about $4,000, depending on their features, he said.

Another reason high-resolution technology has been slow to catch on for surveillance is the difficulty of deploying it for wireless applications. “It has not been widely adopted in public safety because of the capacity requirements,” Coffman said.

“We’re running into cities that have rivers and other places where there’s just no light pollution at all. So they’re going to thermal cameras,” said Mark Jules, chief executive officer at Avrio RMS Group, an Easton, Md., firm that integrates Internet Protocol (IP) surveillance solutions for the public-safety market.

Like high-resolution technology, thermal video also poses challenges for wireless networks. Such systems demand as much as 10 Mb/s of bandwidth for each camera, Coffman said.

Yet another challenge lies in the trend toward integrating digital video with data from other sources, such as computer-aided dispatching (CAD) systems, police call boxes, chemical sensors and gunshot detectors, Jules said. “As you add all those onto the wireless network and create that extra traffic, obviously that also puts stress on the network,” he said. “But it also adds to how law enforcement can use that technology proactively, as well as for investigation.”

Firetide’s answer to the problem of bandwidth-hungry surveillance applications is its own variety of wireless mesh technology, which features a single IP address for the entire network and uses a proprietary routing protocol. The routing technology makes Firetide’s mesh architecture more efficient than other approaches, Coffman said.

Also, Firetide has started using 802.11n radios. This latest version of the Wi-Fi standard was ratified in September 2009. (Ed.: See “Speed thrills“) “Now we can support, in a point-to-point configuration, up to 300 megabits per second,” Coffman said. “So it’s fiber-equivalent performance.”

Besides supporting high-resolution cameras on fixed wireless networks, Firetide provides its mesh networking technology for mobile surveillance systems, such as the one that Korea Telecom is installing in the Seoul Metropolitan Subway system. When complete, the Seoul system will include 350 cameras in its stations streaming video to operators on incoming trains; 300 cameras in its trains streaming video to a monitoring station; and a total of 1,000 mesh nodes on the system’s four subway lines.

“They’re roaming from node to node and maintaining contact at 20 megabits per second,” Coffman said.

Premier Wireless, a wireless video communications company in Orange, Calif., also is leveraging 802.11n. “This is the area where we’re doing extensive work, introducing some new products right after the first of the year that will be capable of in excess of 120 megabits per second,” said Mike Long, the company’s president. “This will allow two, three, perhaps even four cameras over a single link.”

Premiere has developed surveillance systems for numerous public-safety and military applications. One of them places high-resolution cameras and motion sensors on the perimeter of a forward operating base in Iraq or Afghanistan. The system detects incoming enemy fire, warns soldiers about the attack and tells them where to direct counter fire, Long said.

Ratified in 2003, H.264 is used in consumer products such as Blu-Ray discs and Apple iPhones. It’s fairly new in the surveillance market, but it’s growing in popularity, Surfaro said. “H.264 is rapidly replacing all the existing compression technologies in the security industry.”

The less you need to compress a video stream, however, the more valuable that stream will be as evidence in a criminal case, said Grant Fredericks, a forensic video analyst based in Spokane, Wash. “Using a higher-end camera but then attaching it to a low-end upload or compressing it is kind of pointless,” he said. But higher-speed wireless networks allow law enforcement and the courts to take better advantage of the detailed images that high-resolution cameras provide, he added.

The less a video stream needs to be compressed, the more valuable that stream will be as evidence in a criminal case, because skilled defense lawyers can undermine the validity of video that has been compressed in a manner that causes resolution to be compromised, say industry sources. 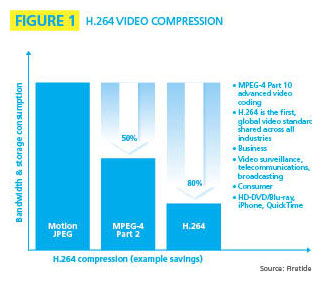 The intelligence built into some camera systems is another factor that could ease the pressure on wireless networks, at least in certain cases. When an intelligent camera detects motion in its field of vision, it can analyze the moving object and transmit information about it to a back-end system, said Arun Hampapur, distinguished engineer and director, business analytics, math and sciences at IBM Research in Hawthorne, N.Y.

Given this basic info, the system then asks the camera to transmit only video of particular interest.

A more promising application for video analytics in public safety is forensic analysis.

For instance, a camera trained on a city street captures a constant flow of cars, vans and trucks of all descriptions, Hampapur explained “None of these movements of traffic would be interesting to you, unless I told you that there was a robbery half an hour back, and the guy who robbed the bank drove away in a blue car.”

Using various forms of artificial intelligence, some systems today can extract and store metadata about the images in a video stream — the kinds of objects that appear, when they arrive and when they leave, as well as their color and size. “When you want to go back later and search for certain types of events, instead of having to manually watch the video, you do a query against the database, and it gives you a few thumbnails you can look at and do the search,” Hampapur said.

High-resolution cameras will enable particularly sophisticated versions of this application, because they’ll be able to pick out small details such as facial hair, Hampapur said.

These capabilities, paired with networks that support greater traffic, are bound to increase demand for video surveillance.

“You’re seeing video that’s able to compress more and maintain the quality, more bandwidth becoming available, and more capable cameras,” Long said. “That’s going to lead to a continued explosion in the number of applications and the use of these cameras.”