Making gains in the vertical plane

Some theory and a summary of recent advances in base station antennas.

Base station (i.e., repeater site) antennas tend to be vertical linear arrays of dipole or similar elements. A vertical array is preferred because the array creates gain in the vertical plane, thereby focusing energy toward the horizon where it is needed. If a directional antenna is required, a combination of a vertical array and a reflector is used to focus energy into a narrow sector, typically 65, 90 or 120 degrees wide at the 3 dB points of the azimuth pattern. In this article, we will examine some of the characteristics of antenna arrays for base-station applications and review some recent technology advances, including smart antennas and multiple-input, multiple-output (MIMO) antenna arrays. Let’s start with antenna patterns.

In the far field, the pattern factor, f(?), is the product of the element pattern factor, fe(?), and the array pattern factor, fa(?). See Equation 1. One of the most widely used antenna elements is the half-wavelength dipole. The element pattern for a half-wave dipole — obtained from Equation 2 — when rotated around a vertical axis forms the “doughnut” pattern familiar to most readers. The array factor for a uniformly excited linear array can be obtained from Equations 3 and 4. By uniformly excited, we mean that each element is fed in phase. Sometimes it is desirable to alter the element phase to create null fill or electrical beam tilt at the expense of some loss in gain. 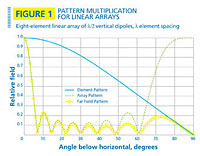 An example of the use of Equations 1 through 4 is shown in Figure 1, where we have plotted the element, array and antenna patterns for an eight-element linear array of vertical half-wave dipoles. 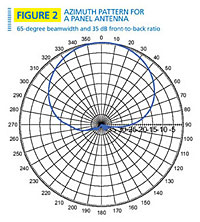 In general, antenna gain is difficult to calculate except for the simplest antenna elements and arrays. For the special case of a uniformly fed linear array of half-wave dipoles spaced one wavelength apart, the gain of the array is equal to N times the gain of a dipole, where N is the number of elements in the array. For example, an 8-element array has a gain of 8*1.64 = 13.1, or 11.2 dBi. In land mobile radio, it is customary to specify gain relative to a half-wave dipole. In this case, the gain is simply equal to the number of dipole elements, which in this example is 8 or 9 dBd.

Decreasing the element spacing to less than one wavelength sometimes is desirable, because it creates favorable changes in the pattern side lobes, but the gain always will be less (at least for dipole elements). In other words, the number of array elements alone does not determine the gain; the length of the array is equally important.

Many antennas are ordered with no beam tilt and zero beam tilt is probably harmless when the vertical beamwidth is greater than 15 degrees, but high-gain antennas (> 6 dBd) almost always should have some downward beam tilt because radio energy directed above the horizon is wasted. Creative combinations of electrical beam tilt and mechanical beam tilt sometimes are used to limit co-channel interference in a direction away from the service area (in front of the antenna) while simultaneously providing good coverage in the service area (behind the antenna). Beam tilt also is a powerful tool in simulcast network design because it helps limit TDI within the network.

Antenna bandwidth can be defined in several ways, but usually it is defined by a maximum Voltage Standing Wave Ratio (VSWR). Often, a maximum VSWR of 1.5 is used. Several antenna characteristics affect bandwidth, including the type of element used and the size of the conductors. Generally speaking, the wider the conductor, the greater the bandwidth. When wide bandwidth is needed, log-periodic elements sometimes are used rather than dipoles.

In many land mobile radio bands, the FCC requires vertical polarization, so the licensee has no polarization option. Cellular phone operators, on the other hand, have no limits on polarization and 45-degree “slant” polarization is common, using two antenna arrays in one radome, with the antenna elements orthogonal to each other and at a 45-degree angle to the vertical. One of the advantages of polarization diversity is that it limits the number of required antennas, reducing the wind load on the tower and making zoning approval more likely. For more on antenna diversity, see the June 2006 issue of Mobile Radio Technology.

Transmit antennas must handle high power and multiple simultaneous frequencies, making intermodulation a key concern. Antenna manufacturers typically design for -150 dBc, 3rd-order PIM rejection with two, 20 W transmitters applied at the connector. Many manufacturers claim to PIM test every antenna before it is shipped, but low-PIM design is more important than factory tests. Low-PIM design is important because vibration, temperature variations, corrosion and other environmental effects can degrade an antenna’s PIM performance over time. Good low-PIM designs employ 7/16 DIN connectors, no coaxial cable harnesses, all-stripline construction, welding rather than fasteners, no dissimilar metals and the use of mated materials with similar temperature-expansion coefficients.

Smart antennas enhance coverage through range extension and hole-filling. Definitions vary, but for our purposes, a smart antenna is an adaptive antenna array used to determine direction of arrival and to perform electronic beamforming. Smart base station antennas allow the system to tailor the pattern for the most disadvantaged user, thereby improving service-area reliability without adding new sites. Smart antennas have been touted as the next big thing in the cellular phone industry for more than 15 years, but high costs and logistical hassles created by large antenna arrays have prevented widespread adoption to date.