The application is targeted primarily at workers in the government, surveillance, intelligence, hotel and warehouse industries that typically don’t need to carry a rugged portable handset but occasionally need P2T communications. 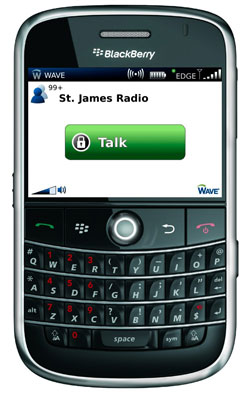 Twisted Pair will unveil at IWCE 2010 in Las Vegas this week an application for BlackBerry smartphones that turns such devices into push-to-talk (P2T) handsets. The application is targeted primarily at workers in the government, surveillance, intelligence, hotel and warehouse industries that typically don’t need to carry a rugged portable handset but occasionally need P2T communications.

It leverages the company’s IP-based WAVE 5.0 group communications software platform that is engineered to connect traditional land-mobile-radio networks to telephony networks or to enable interoperable communications between disparate LMR systems in the field.

The engine that drives the mobile P2T application and provides the requisite authentications resides on the enterprise’s server. The application downloaded onto the device is a thin client, which Tom Guthrie, Twisted Pair’s president and CEO, believes will be particularly attractive to federal government workers. “If the device is lost or stolen or compromised, there’s not a lot of information on it,” he said. “You just simply turn off the proxy, so the device can’t connect anymore.”

But Twisted Pair expects that other versions of the application eventually will be developed for a wide range of devices and purposes, either by itself or by independent software developers with which the company partners. “You can use this platform to build these very thin applications that can run in all kinds of different scenarios,” said Joel Groen, WAVE product manager. “So, you can imagine a push-to-talk button on a SharePoint page.”

The initial objective was to develop an application capable of operating on any device across any network, Groen said. The way Twisted Pair accomplished that goal was to move the audio processing off the device and place it onto the enterprise server. “So, the device can be on the East Coast and the server that’s processing that audio can be on the West Coast. As long as there is some kind of wireless IP connection, then all is good.” For example, senior-level officials of FEMA in Washington could speak directly to agents on the ground in another part of the country after a disaster.

Indeed, the application enables both one-to-many and point-to-point communications, the latter of which are encrypted in compliance with 256-bit AES. This should prove attractive to any government entity that needs secure communications, particularly law enforcement, according to Guthrie. “They want a secure capability to extend access to those push-to-talk radios and also a way to communicate with each other without taking up radio channels or making a telephone call,” he said.