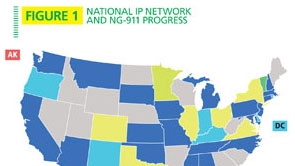 NG-911 is about to become reality, but several speed bumps still need to be cleared before the vision finally comes to fruition.

Next-generation 911 systems that leverage IP-based technologies to enable public-safety answering points (PSAPs) to receive text, data, images and video in addition to traditional voice functionality appear to be on the cusp of becoming reality after several years of theoretical debate within the industry.

Several PSAPs across the country have shifted from circuit-switched networks to IP-based architectures, and many more have made plans to do so. Significant testing of NG-911 capabilities and operational impacts was completed last year. A PSAP in Iowa has deployed technology that allows it to receive emergency text messages via the 911 system. Some vendors already have products that they claim are next-generation ready.

However, no PSAP claims to be an NG-911 center at the moment.

“Absolutely, people can say they have pieces of next-gen technology that are ready to go, but I don’t think anybody is in a position to do it from end-to-end,” said Stephen Meer, chief technology officer for Intrado.

But Meer and other industry sources believe that could change in the near future, as some early adopters could be receiving live NG-911 communications during the next 12 months.

“It’s conceivable that, in the fourth quarter of this year, someone could put a true NG-911 system in place, with all of the basic functions,” said Roger Hixson, technical issues director for the National Emergency Number Association (NENA). “There are a number of places that are doing pilots or are working on partial systems or interim systems that are headed in that direction.

“I certainly wouldn’t guarantee that a true NG-911 baseline system will happen this year, but it could, if the vendors in question have been tracking with the standards work pretty closely,” he said. 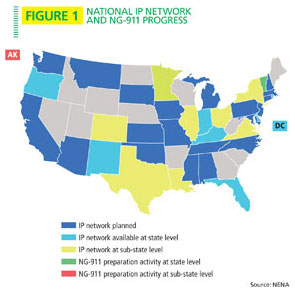 While having a handful of NG-911 systems in place would be a milestone accomplishment, many of the greatest potential benefits of the next-generation vision — for example, the ability to share resources and information between PSAPs — require broad-based adoption. For this to occur, several technical, operational and funding hurdles must be cleared.

One key step is to finalize some of the standards surrounding NG-911. While the overarching view is that the NG-911 architecture will allow PSAPs to send and receive information from any device from any location, questions remain as to what actually constitutes a NG-911 system.

While some observers believe that standards debates are more about semantics than substance, establishing a clear roadmap that PSAPs can use to make the transition to a next-generation world is a priority throughout the industry. This summer, NENA hopes to release the main design document for the architecture of a NG-911 system, as well as a plan that details the transition steps that PSAPs can follow, Hixson said.

Meer stressed the need to provide PSAPs with flexibility as they make the transition to next-generation systems.

“I think of this almost as a traffic roundabout. You can come in at any entry point … and ultimately, you’ll work your way around the circle, and you’ll just keep picking up new functionality at each logical step,” he said.

In addition, Meer noted the need to ensure that each transition step offers tangible benefits, e.g., additional functionalities and/or cost-saving efficiencies. Unless tangible benefits exist, budget-challenged public-safety entities will not be able to justify making large capital expenditures to essentially mirror, in an IP-based environment, the same 911 capabilities that exist today.

One concern that Intrado officials have with the NENA process is that it has focused too much on the end vision for NG-911 and has overlooked the details needed to address some key real-world factors that significantly will impact adoption, Meer said.

“Next-gen 911, as NENA has teed it up right now, makes a number of suppositions and assumptions about things that will happen in the world in order to support that vision of next-generation 911,” he said. “The reality is that a lot of those assumptions are not foregone conclusions at all. These represent major changes to basically all existing telecommunications service providers [in terms of] how they manage data and the interface points for voice between them and the next-generation world.”

With this in mind, Intrado has led efforts to coordinate NG-911 efforts with standards work being done within the commercial telecommunications industry that provides citizens with the ability to call 911, Meer said. In addition, Meer applauded the Industry Collaboration Event (ICE) conducted this spring to assess the ability for equipment from different vendors to interoperate, even though Intrado opted not to participate in the first one.

Meer also believes Intrado’s managed-services approach is a logical way to deal with the complications inherent with enabling multiple types of communications technologies to enter the 911 system. Some in the 911 industry fear that such a model could result in excluding new entrants into the next-generation arena, although Meer said Intrado’s approach allows for third-party vendors.

Meanwhile, some industry observers have expressed concern that the differences between NENA and Intrado might result in competing standards that could fracture the 911 industry. But Meer said Intrado is encouraged that NENA has “really turned a corner” by focusing more on real-world details recently. Similarly, Hixson believes any differences will be resolved.

“There are opinions about how much needs to done that may cause differences of viewpoint at the moment, but that is a matter we need to work through, as is normally the case,” Hixson said. “I don’t see a particular long-term problem at all.”

Assuming the technical issues are resolved, next-generation PSAPs potentially will be inundated with multimedia information, meaning that their “world is going to change like it hasn’t changed since 911 was originally released,” said Bill Pryor, director of public safety for Verint Systems, which is developing speech, desktop and text analytics systems to help PSAPs process information more efficiently.

Many in the industry believe that, if not handled properly, the emergency communications from voice, video, data and text sources potentially could be overwhelming. Pryor said the fear is that important data could be missed amid the potential flood of information, even in situations as routine as a car crash.

“What happens when the two [police] cars that arrive have no idea that it’s escalated into a road-rage incident, are completely unprepared and it costs an officer his life?” Pryor said. “What happens when it comes in after the fact that you had three text messages [saying] people pulled guns, yet that officer was never notified that there was an escalated incident. All of these things require what we consider to be a monumental change in process within the PSAP.”

In addition, maintenance schedules for next-generation PSAPs promise to be more demanding. Meer noted that selective routers in the existing “rock solid” 911 system typically do not require a software upgrade for more than five years. In contrast, software upgrades to IP voice-routing systems often are needed every couple of weeks to deal with new security threats, he said.

To some extent, the work to address NG-911 operational issues had to wait until more was known about the technical environment. But even with the technical framework determined, there still are myriad approaches to deploying call-center personnel — some advocate letting call-takers receive text and video while speaking on the phone, while others believe having PSAP employees specialize in the various types of communications the center receives is a better approach.

“Honestly, I expect that it will be a PSAP-by-PSAP decision,” Pryor said. “Smaller PSAPs that don’t get very much [traffic] will continue to be blended, because they can’t afford to add multiple positions for these types of situations. The large ones that currently specialize are going to continue to specialize. It’s that middle group where you don’t know where the breakpoint is going to be.”

Of course, moving to an IP-based 911 system will require additional money for capital costs and possibly additional PSAP personnel. Exactly how much money will be needed is not known, but the FCC plans to conduct a study this year to project estimated costs. Patrick Halley, government affairs director for NENA, said federal funding is especially needed while PSAPs make the transition to next-generation architectures.

Meer echoed this sentiment, noting that the NG-911 transition likely will not be finished in a short interval.

He added that “even if everything was locked and loaded,” it probably would take a decade to swap out all of the infrastructure in 7,000 PSAPs, within all of the commercial carriers, and at all of the third-party service providers in order to make NG-911 a reality.

“It’s going to take a while,” Meer said.