The Mic Keeper meets the International Association of Fire Chiefs’ recommendations that firefighters place radio microphones one to two inches from the mouth or SCBA voice port with the microphone positioned directly in front of the audio source. 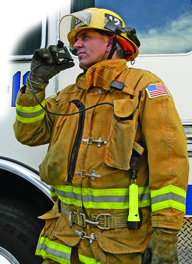 Hammerhead Industries unveiled its retractable Mic Keeper, which secures firefighters’ radio equipment to their lapels. Capt. Raul Angulo — a 30-year veteran of the Seattle Fire Department —said firefighters on scene often work in rugged environments and, as a result, radios come lose while they are addressing an incident, he said.

“Firefighters often lose their microphone during a fall or while bumping into objects during an incident,” Angulo said. “This device helps keep it in place.”

The Mic Keeper meets the International Association of Fire Chiefs’ recommendations that firefighters place radio microphones one to two inches from the mouth or SCBA voice port with the microphone positioned directly in front of the audio source, Angulo said. He said the device screws into the bunker coat and when released after use, it will automatically retract with a 12-ounce force to a secure position leaving the hands free to use other critical firefighting tools.

The device also keeps the microphone close to the body, which prevents it from becoming entangled or damaged if firefighters have to crawl on the ground or squeeze through tight spaces, Angulo said. It also helps avoid major problems caused by a lose microphone dangling on the ground or a melted microphone cord that was wrapped around the neck over the reflective material on turnout coats, he said.

“This is the only equipment that keeps the mic where it should be,” Angulo said. “I recommend it to all fire departments.”

The device costs around $20, Angulo said.