Most importantly, the radio addresses firefighters’ concerns over digital audio quality by using a two-microphone design that filters out background noise and acoustic- and noise-cancelling software tailored to the loud noises encountered on the fireground, said Brenda Herold, a company vice president.

“Fireground sounds, like fire alarms, are removed from the processing through noise profiles built in the software,” Herold said.

The radio also has a top display with intelligent lighting that lets users receive commands based on color, instead of trying to decipher a text message in a smoke-filled environment.

“The color indicates a command,” Herold said. “For example, it can be programmed to light up a specific color to represent a mayday.” 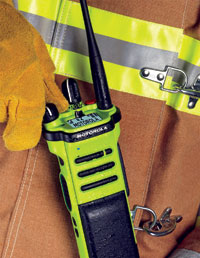 Even the housing and button locations were based on firefighter needs, Herold said. For example, a large emergency button was placed below the antenna so users in blinding environments can find it with one finger, and a rubberized shell was installed for easier grip by water-soaked, gloved hands. The shell is ruggedized to meet MIL-STD-810 C, D, E, F and G and comes in an array of colors — such as lime green and public-safety yellow — so “if they drop it, it can be easily located,” she said.

The radio also can tie into biometric shirts that monitor firefighters’ health, Herold said. For example, respiratory data can be transmitted back to command and control over the radio, and firefighters then are alerted through an audible tone or color change on the top display.

“On the fireground, firefighters are already experiencing sensory overload,” she said. “So having the radio light up just one color to indicate duress can be seen by others who are working with them.”

It’s taken years of design and testing to come up with the product. Nearly three years ago, the company sent engineers to work with the Sunrise (Fla.) Fire and Rescue Department on the development of a fire-service radio. A dozen engineers were outfitted with bunker gear and spent a day in battleground conditions via live-fire training exercises, said Div. Chief Tom O’Connell.

“Engineers began to learn the shortcomings of communications under these environments,” he said.

O’Connell said company engineers then presented rough designs to firefighter user groups and asked about ergonomic needs, such as the size of knobs for use with gloved hands. They also documented the frequency range of background noises encountered on the fireground, such as a rotary saw cutting through metal or diesel engines revving.

The company next delivered 24 prototype radios, shoulder microphones and mobile chargers for the department to test for a two months, O’Connell said. The company adjusted the radio to address major reported issues, such as radio feedback. The result was a 50% increase in volume of the radio and clarity of communications based on a side-by-side comparison with older radios, O’Connell said.

“It greatly enhanced our communications in adverse environments,” he said.

Noise cancellation software tests will continue through the end of this year, Herold said.