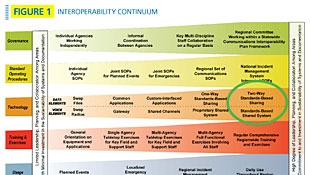 Off to a good start

It's early in the evolutionary cycle, but multiband radios already are having a positive effect on interoperability.

Emerging in the public-safety market are single radios that can take the place of two or more radios at different frequency bands. These single radios capable of transmitting, receiving and scanning in multiple frequency regions are called multiband radios, and they are improving the degree of interoperability capabilities.

The word “interoperability” can mean different things to different people. Perhaps the best definition can be found in the Homeland Security Interoperability Continuum. (See Figure 1.) The most technical solution to get people to operate together most often occurs when agencies share standards-based systems.

If both agencies are using the same frequency band on a standards-based systems such as Project 25, their area of interoperability is shown in Figure 2 by the orange-colored areas. The orange areas represent the coverage areas where two different agencies can communicate together using either their own or their neighbor agency’s radio system. 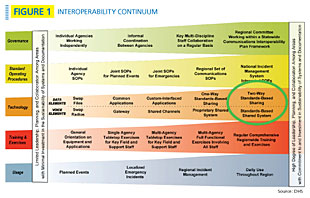 But what if the two agencies use different frequency bands or different proprietary systems? If their systems are patched together, then each agency’s subscriber equipment only can communicate with the other during an incident where the coverage overlaps. This is depicted in Figure 3 by the orange areas. Otherwise, each agency receives only the signal from its own system, on its own subscriber equipment, and on its own frequency band.

In this diagram, Radio User 1 sends a 150 MHz, P25 voice packet to Tower One, where the signal goes down the mountain and is patched to the other agency’s 700 MHz, P25 system (not shown). Then the voice packet is transmitted from the agency’s 700 MHz Tower 2 to Radio User 2 — even if the two users are standing only feet apart. If Radio User 2 travels outside of the coverage range of Tower 2, then the radio users no longer can talk to each other, and Radio User 2 cannot even talk to his own dispatch center.

These coverage overlaps of patched radio systems effectively create islands of interoperability across regions, shown in Figure 4 by the orange areas. If the two different agencies are to communicate together at the incident scene, any mutual-aid incident (fuel spill, bomb threat, flood, etc.) must now occur only within these orange interoperability islands, a highly unlikely scenario.

The different agency users with patched systems on different frequency bands will not be communicating with each other daily because their coverage areas do not overlap. They would not be proficient in different codes or different procedures, essentially undercutting the interoperability effectiveness, as the users will require increased training to compensate for decreased use. 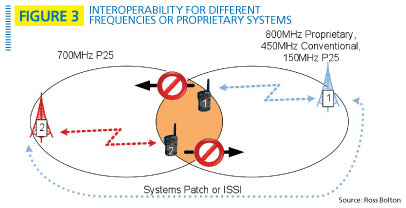 In a survey performed for the state of Oregon, the major impediments for interoperability, as seen by the user community, were coverage area and the use of different frequency bands. How does an agency overcome these issues to create a higher degree of interoperability on the scale of the interoperability continuum?

In the past, a practical solution was to purchase multiple radios, one for each proprietary system or frequency band. Again, this often resulted in decreased use, as greater training was required to know the features of all the different radios.

Now manufacturers have combined multiple frequency bands into one subscriber package, called the multiband radio. The result is the user’s radio can scan, listen, and transmit in different frequency bands, in different agency systems, and in special cases even can operate in proprietary systems.

Dispatching for a user traveling across two different agencies’ coverage areas still requires some coordination and/or a hardware solution between the two agency dispatch centers.

Having good interagency relations, training, and agreements would enable the dispatcher from one agency to coordinate the efforts of another agency’s users within either coverage area.

Sometimes there is a preference for only the primary agency dispatch center to coordinate its own employees’ efforts. Using a dispatch patch, dispatch tie or the P25 Inter RF Sub-System Interface allows a dispatcher from the first agency to talk to his personnel over the second agency’s system.

In practice, if the user’s radio can operate on another radio system and there is legitimate radio traffic that pertains to the other agency, the latter’s dispatchers usually do not prohibit outside users from using their system. The FCC has established calling channels to encourage such cross-agency communication.

The end result from these solution variations is that multiband radios can operate daily within various agency systems, decreasing the need for radio equipment training and increasing true interoperability.

However, only three manufacturers at this time appear capable of providing functionality in all three frequency bands at once (150/450/700-800 MHz): Datron, Harris, and Thales. In Motorola’s APX radio, only two frequencies are allowed on the subscriber radio unit at the same time, making the APX a dual-band radio. (Ed.: See “Field tested, firefighter approved” for more on Motorola’s latest APX radio.)

The number of systems in use within a region will determine whether two or three frequency bands are needed. In Oregon, about 90% of public-safety agencies operate in the 150 MHz band, but the remaining 10% that operate in the 450/700-800 MHz spectrum cover about 80% of the population base. In more urban environments, like Orange County, Calif., the major county system operates in the 800 MHz spectrum, so a dual-band radio may be enough.

Another factor to consider when attempting to create interoperable communications between agencies is the proprietary nature of legacy systems, which potentially prevents subscriber units made by competing companies from being functional on such systems. A modern-day Harris Unity multiband radio, for instance, will not work on a legacy trunked Motorola SmartNet radio system. Likewise, the Motorola APX is not expected to work on any Harris OpenSky system.

A commonplace approach to solving this dilemma involves patching such systems together; but system patches do not allow a subscriber unit to use the proprietary system. Instead, the system patch creates islands of coverage as shown previously in Figure 4.

The solution for an agency needing to talk on another agency’s proprietary radio system is that the agency must buy a multiband radio made by the same manufacturer of the proprietary system. For example, the Motorola APX works on the Motorola legacy SmartNet system.

The limited table below illustrates expectations of the different multiband usability on different systems. Note that Motorola is listed as not being able to utilize the 450 MHz band because 150/700-800 MHz would be the most likely configuration of its dual-band APX radio.

The last factor to consider is price. The industry as a whole has been experiencing sticker shock from the price of the high-end radios, and the multiband radios are high-end radios.

Depending on the volume and feature set at time of purchase, they can range from about $3,000 to $6,000 each, surprisingly about the same price as a high-end single frequency radio. If the total ownership costs of two low-end radios at two different frequencies, with two sets of accessories, are compared to one multiband radio, the prices again are similar.

Finally, what about those agencies that don’t want multiband today, but may want it in the future, because they like the high-end feature set of over-the-air programming, GPS tracking, and color display screens? The multiband radios are software programmable allowing for future upgrades. Manufacturers have been known to offer single frequency band use in the multiband package, with the ability to upgrade to more frequency ranges at a later date.

Multiband radio technologies and feature sets are still emerging. Portables are in full production now, though mobiles are at various stages of production depending on the manufacturer. The P25 over-the-air programming is not defined yet, and when it does become defined, manufacturers have predicted that it too will be offered as a purchasable accessory for the multiband radio.

Even at this stage of development, multiband radios can have a great impact on making the highest degree of interoperability a reality today.

Ross Bolton is a communications engineer for the Oregon Department of Transportation and Oregon State Police Statewide Wireless Group, where he helps maintain 181 radio sites. He was previously employed with the Orange County (Calif.) Sheriff’s Department, which has 100 agencies and nearly 21,000 subscriber units.