Plant CML, a subsidiary of EADS North America, is demonstrating a glass “touch table” that displays a variety of images and data, such as satellite and aerial photos, maps, building floor plans, video feeds and mug shots. By simply touching the image on the screen, an incident commander can transfer it to any of the three large screens that integrate with the touch table.

HOUSTON — Fans of the television show NCIS: Los Angeles marvel at some of the futuristic technologies that the agents have at their disposal. Arguably most impressive is the array of video screens in the agency’s headquarters that provide amazing levels of situational awareness. High-definition video from various sources is presented on these screens. Images are enlarged or shrunk effortlessly through simple hand movements, which also are used to “toss” images from screen to screen as needed. In addition, agent positions are monitored and criminals are tracked on these screens.

This week, at the Association of Public-Safety Communications Officials conference, Plant CML, a subsidiary of EADS North America, is demonstrating technology that the company says will bring to the public-safety sector similar levels of situational awareness. It has developed a glass “touch table” that displays a variety of images and data, such as satellite and aerial photos, maps, building floor plans, video feeds and mug shots. By simply touching the image on the screen, an incident commander can transfer it to any of the three large screens that integrate with the touch table. 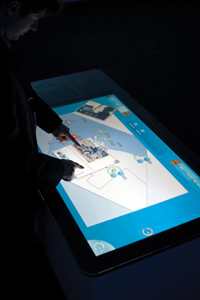 “This is what we’re looking at, in a visionary fashion, for the command center of the future,” said Tami Timperio, vice president of marketing. “It provides incredible [situational awareness] by offering three-dimensional navigation and access to any types of media, including voice, images and data.”

For example, a cityscape could be displayed on the touch table. An incident commander then could touch the image to see the feed from fixed surveillance camera located where an incident is occurring. Or he could determine from the image where the agency’s resources are located in relation to the incident in order to determine the appropriate response.

In addition to the touch table, EADS also is demonstrating this week two other next-generation solutions. One is the Mobile Video 600, which enables live video streaming from both fixed and mobile surveillance cameras over an LTE network. This is a key development because video is expected to be the killer app for LTE networks, particularly for public-safety users, according to Danny Locklear, vice president of marketing for Alcatel-Lucent, which is partnering with EADS to produce public-safety communications technologies that will be based on both the LTE and Project 25 standards.

“LTE will enable higher quality video relative to existing 3G wireless networks. And in most cases, public-safety agencies don’t even have that capability. So, this is a major disruptive leap forward,” Locklear said. “Can you imagine the power of having that patient on video and having a medical expert watching that same high-definition video and directing the emergency personnel on how to mitigate a potentially life-threatening situation? I think most would agree that video is a real-game changer, and LTE is the first mobile technology to enable it.”

Another next-generation solution being demonstrated this week by Plant CML/EADS is dubbed Operation Management 100. It provides a map-based display of location and status of mobile units and personnel, as well as a filtering function that prevents dispatchers being distracted by unnecessary information, said Timperio, who believes the latter capability will resonate with public-safety officials.

“We met with our strategic advisory council a couple of weeks ago,” Timperio said. “These are agencies that range from 16 call-taking positions on the low end to about 60 positions. They told us that the amount of information that a 911 call-taker currently is receiving is beyond anything that they’ve received in the past.”

The amount of information they receive in the broadband-enabled future is expected to be an avalanche compared to what they receive today; for example, 911 callers will be able to send video and images from incident. For that reason, Plant CML/EADS was told by its advisors that “anything that we develop in the future really needs to provide analytics that help the call-takers process the information better. The Operations Management 100 solution is a step in the right direction,” Timperio said.