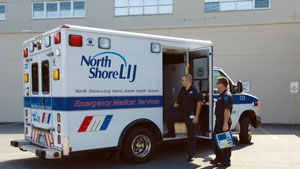 In Motion Technology announced that North Shore-LIJ Health System has deployed the company’s onBoard Mobile Gateway to wirelessly connect and manage its ambulance fleet.

The ambulance company provides emergent and non-emergent patient transportation into and out of their health system — which consists of 15 healthcare centers and transports more than 60,000 patients annually to hospitals across the five boroughs of New York City and Long Island. Schwalberg said a better wireless connection was needed to transport a large amount of dispatch and cardiac monitoring information because its analogs radios couldn’t handle “this type of volume and our tremendous logistic, technological and communications demands.”

“We used to transmit over an analog radio system and that’s how all data was transmitted back and forth,” Schwalberg said. “It was very slow, expensive and inefficient.” 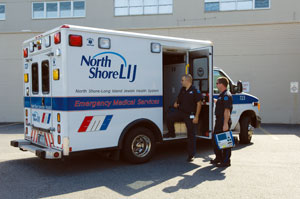 Now, In Motion’s gateway turns each ambulance in the 60-vehicle fleet into a rolling hotspot not tied to a single network provider. Schwalberg said it senses and selects an available wireless network and roams across networks to provide emergency communications anywhere in the city. In addition, it provides connectivity for laptops, PDAs and other devices in and around each vehicle, he said.

Schwalberg said the next step is to integrate voice-over-IP technology into the ambulance in order to eliminate the two-way radio system all together. In addition, they will be testing the system’s efficacy with iPads to share stroke victim information at the scene with neurologists and ER doctors at the hospital.

Although the system is being used for a commercial company, Schwalberg said it could work at a municipality, or fire department-based, emergency medical service.

“I think this device could work for any service for seamless communication,” he said.” I don’t think it is just ambulance but also can work for police and fire agencies.”