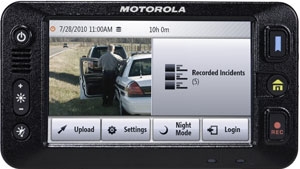 Built with a solid-state hard drive that reduces unwanted sound and is resistant to vibration in the vehicle, the MVX1000 has a touchscreen interface on an in-car computer.

HOUSTON — Motorola this week announced the MVX1000, a rugged in-car digital video system designed to capture evidence in the field and make the information easily accessible to both officers and administrative personnel.

Built with a solid-state hard drive that reduces unwanted sound and is resistant to vibration in the vehicle, the MVX1000 has a touchscreen interface on an in-car computer — a vehicle-mounted laptop or the dedicated 5-inch LCD display.

“So, an officer working in a mixed fleet — one day he’s working with this in his vehicle, the next day he’s got this [5-inch] in his vehicle — doesn’t have to retrain himself on how to do something,” Motorola’s Les Miller said during an interview on the floor of the Association of Public-Safety Communications Officials (APCO) show. “It’s very intuitive, and the work flow is the same.”

By using the interface correctly, the video information captured can be used more efficiently by the officer in the vehicle — via a playback mode in the car — and by headquarters personnel after it is uploaded via fixed or 802.11n wireless connectivity, Miller said. 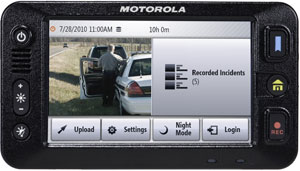 “The officer can see videos they have recorded, add bookmarks or geotags at interesting points in the video, enter in metadata about the video, in terms of information about the citizen or vehicles involved they could enter in a CAD ID number so they could track it better on the back end,” he said.

Also helping the back-end use of the video is Motorola’s partnership with NICE Systems, which has developed video-management applications designed to make it easier for appropriate personnel to find, review and export video and other data throughout the law-enforcement process.

“We are excited about expanding our partnership with Motorola to help public safety agencies manage their fixed and mobile video evidence seamlessly through an integrated application,” Chris Wooten, NICE Systems’ president of security division Americas, said in a prepared statement. “Now, through our combined solutions, we’ll be able to help law enforcement leverage all of their multimedia incident data for greater efficiency and effectiveness, leading to improved public safety.”