UAV comes in handy when raiding a suspected drug lord

Last week at the Association of Public Safety Communications Officials conference in Houston, Datron World Communications showcased the Scout unmanned aerial vehicle, which is manufactured by Aerion Labs of Waterloo, Ontario. A video that was shown illustrated the effectiveness of UAVs for surveillance operations. 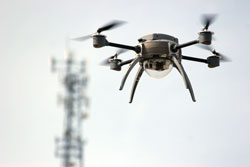 The U.S. government used the Scout over several days to conduct surveillance of a compound in Central America, where an alleged drug lord and his crew were suspected of hiding. Once the UAV confirmed that the suspects were on the premises, agents conducted the raid.

“There’s no point kicking down the door when no one’s home,” said Chris Barter, Datron’s Scout program manager. “Using Scout, they were able to figure out their movement patterns and when they were home.”

Another advantage of UAVs such as the Scout is that they can be used to for reconnaissance purposes so that military troops and law-enforcement officers “know what’s around the corner,” said Datron CEO Art Barter.

“When you think about this in a military application, the ability to go, let’s say, three football fields into the battlefield to assess what’s going on before you send [troops] in there will be a great advantage, especially in places like Afghanistan and the Middle East, where there are a lot of caves and mountains,” he said.

Other applications include wildland-fire observation and border patrol, as well as crowd control and security for major events.

“The World Cup wanted to use Scout during the soccer matches, but we couldn’t get product to them in time,” Art Barter said.

The UAV communicates to the system’s base station over a 900 MHz link, while the base station communicates with the tablet PC via an encrypted Wi-Fi link. All of the UAV’s movements are controlled by the tablet PC using a “point-and-touch” interface. The interface can be used to identify areas for reconnaissance and to pinpoint specific targets, as well as to create no-fly zones. When the UAV is locked onto a specific target, its GPS function will indicate on the touchpad’s display where the target is in relation to the overall reconnaissance area.

“It’s designed so that you don’t have to have any piloting experience,” Chris Barter said. “Just about everybody can pick it up and within 10 to 15 minutes, you’re good to go. It’s very simple to use.”

The UAV also is designed to be both rugged and portable. All of the UAV’s components — including its legs, payloads, battery and rotors — snap on and off its rugged body, which allow it to be deployed in a manpack. The legs and rotors also pop off upon impact, which reduces the likelihood of significant damage should the UAV crash-land.

“It’s designed for rapid deployment. You can pull it out of the pack and in a few minutes, you’re ready to go,” Chris Barter said.

The UAV offers a transmission range of three kilometers when its Lithium-ion battery is charged fully. When fully charged, the battery offers about 20 minutes of flight and transmission time, though transmission range diminishes as the battery depletes. It also is GPS-enabled; the UAV automatically will return to its home base when battery-depletion reaches a pre-defined level.
In addition, it utilizes brushless rotors that are so quiet that the UAV can fly as low as 20 meters (about 66 feet) above the target without being heard, Chris Barter said.

Available payloads include 5- and 10-megapixel daylight and infrared cameras that are plug-and-play; they immediately start transmitting video or still pictures upon plug-in, Chris Barter said. The cameras feature a two-axis gimbal to keep the video steady even in high winds. He added that the UAV has a wind-threshold of 60 kilometers per hour (37 mph). It also resists rain and humidity.

Future payloads that are being discussed include one that would allow the Scout to scoop up a soil sample and analyze it for contaminants, data that could be used to prevent deployment of military troops into hazardous conditions involving biological or chemical agents. Datron also is working on a network gateway that will allow any video or photos transmitted by the UAV to be transmitted to an incident command center, in addition to the tablet PC.

Datron currently is the worldwide distributor for Scout, with the exception of Canada. The company hopes to eventually manufacture the device, according to Art Barter.

In other news, Datron’s Guardian II VHF radio will go into production in about 30 days, and soon will be reviewed by the FCC for type acceptance and by the Project 25 Compliance Assessment Program, according to John Biljan, the company’s national sales manager. The UHF version of the radio will follow suit in about eight weeks, Biljan said. He added that the company expects the tri-band version of the radio — which will offer VHF, UHF and 700/800 MHz operation — will be in production by the end of the year.