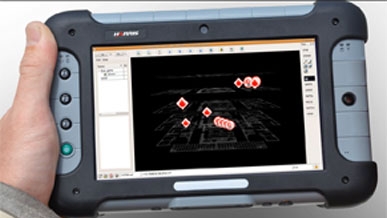 “The technology world has been looking at the problem of locating firefighters in a building for some time,” he said. “We believe we have found the right solution and have applied some common-sense firefighting experience resident within our company to develop the system … and make it firefighter friendly.”

The Harris GR-100 includes an SCBA-mounted tracker module and a radio network system that transmits location data every few seconds from an embedded module. It also includes a commander unit, or GUI software display, of firefighter’s location that is viewed on a ruggedized tablet computer or laptop used by the incident commander or safety officer. Location information is presented in three dimensions and is updated every few seconds to provide interior personnel positions, Facella said. Data can be rotated 360° and viewed from the top down, he added.

“It gets information from the interior firefighters and uses graphical software to depict — in three dimensions — where the firefighters are based on an identifier for them, such as a badge number,” Facella said. “Basically you have icons moving around the screen and you can see where they are going and where they’ve been.”

Data is sent over the 700 and 800 MHz licensed public-safety bands, Facella said. Using licensed frequencies is a major advantage, since ISM bands are overcrowded with commercial devices, such as baby monitors or Wi-Fi systems that “can interfere with mission-critical communications,” he said.

The system has been tested for suitability in several types of structures. Facella explained that the company completed studies on building density and complexity and their ability to propagate radio waves in order to determine the feasibility of the system. He said they found it works best in bread-and-butter structures, such as single family residences of reasonable size, small strip malls and small office buildings.

“Unfortunately, those kinds of buildings are problematic to the fire service and create a disproportionate amount of safety incidents and line-of-duty deaths,” he said. “So we focused on those structures.”

Facella hinted that in the future, the company will offer an additional component to extend the system’s range in buildings that are unfriendly to RF signals.

“We will have a future iteration that will take care of that and then we are going to look more closely at less common but more problematic buildings in the future,” he said. 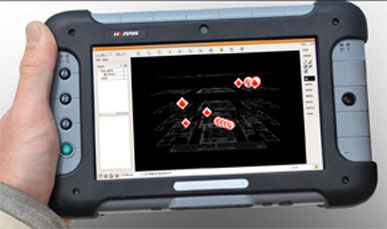