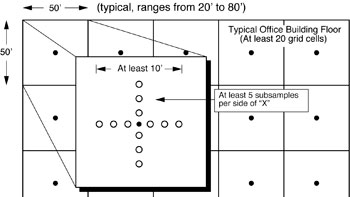 Test methodology is just part of the NFPA's detailed game plan for designing an in-building system.

Over the last decade, many U.S. fire jurisdictions have adopted standards for in-building public-safety radio-enhancement systems. These standards are designed to ensure adequate indoor radio coverage for firefighters and other public-safety personnel during emergency response. Locally generated standards arose as jurisdictions gradually abandoned the traditional firefighter building telephone system and in response to Recommendation 22 of the National Institute of Standards and Technology’s (NIST) World Trade Center report.

One of the lessons learned from the 9/11 terrorist attacks is that reliable in-building public-safety radio coverage is vital to saving lives. The NIST recommendation reads as follows:

Recommendation 22. NIST recommends the installation, inspection and testing of emergency communications systems, radio communications and associated operating protocols to ensure that the systems and protocols:

Many public-safety and building-code officials realized that an effective national standard was needed to ensure uniformity, guarantee effectiveness and encourage widespread adoption. Toward that end, parallel efforts resulted in two published standards in 2009:

Section 510 of the IFC is incredibly brief (just two-thirds of one column) and provides very little guidance to the building owner or public-safety agency. Annex O, on the other hand, is five pages long and offers specific recommendations for performance, testing and monitoring of the radio enhancement system. The purpose of this article is to summarize the main requirements of Annex O.

While Annex O to NFPA 1 uses the term “radio enhancement system,” or RES, such a system is better known in the industry as a bidirectional amplifier (BDA) system or a distributed antenna system (DAS). (To learn more about BDA and DAS technology, see the October 2006 issue of Mobile Radio Technology.) Let’s now look at some of the important sections of Annex O.

O.3.1 General.: The document requires that the RES operate without causing interference to other parts of the public-safety radio system and that technologies be employed that are compatible with the public-safety radio system. Most RES employ an over-the-air broadband BDA at the donor antenna. These devices are notorious for causing harmful interference, especially if there is poor isolation between donor and coverage antennas (there should be 15 dB minimum). Annex O envisions a permitting process whereby the system design must be submitted to the authority having jurisdiction (AHJ) for approval before it can be installed.

O.3.3 Signal strength: Minimum inbound and outbound signal strengths of -95 dBm are required. Note that a typical 12.5 kHz FM radio will operate satisfactorily at -102 dBm in multipath fading. When measuring signal strength at the repeater site, the gain of any amplifiers between the antenna and receiver must be used to translate the -95 dBm threshold to an equivalent carrier-to-noise ratio at the receiver.

One weakness of Annex O is that it does not explicitly recognize the role of radio interference other than to say that the RES must not interfere with other parts of the public-safety radio system. In other words, the document specifies signal strength alone when it should specify a minimum carrier-to-interference-plus-noise ratio. This oversight is mitigated somewhat by specifying a minimum delivered audio quality (DAQ) in the section on testing.

Although not stated in the document, we must presume a building that meets the requirements of O.3.2 and O.3.3, without enhancement, does not require an RES. Similarly, enhancements only should be required on floors or in areas that do not meet radio-coverage requirements.

O.3.5 System components: Signal boosters, including BDAs, shall have FCC type acceptance and must be operated in accordance with commission rules (for example, see CFR Title 47, Part 90.219, Use of Signal Boosters).

O.3.6 Power supplies: A building on fire likely will lose its prime power source, so a strict standard for secondary power is necessary. Annex O requires either 12-hour battery backup for the RES, or an automatic-starting generator and storage batteries dedicated to the generator capable of at least two hours of operation at 100% capacity. (As many of our readers can attest, generators sometimes fail to start automatically and require manual intervention.)

O.3.7 System monitoring: An automatic-monitoring system — with a dedicated panel in the emergency command center of the building — is required. The system must signal an alarm in the event of an antenna malfunction or signal-booster failure. A separate alarm for oscillating amplifiers is desirable. Power supply systems must, at a minimum, signal an alarm when AC power is lost, when the battery charger fails and when the battery has a low charge (defined as 70% of capacity).

O.3.9 Testing: There are three types of testing specified in the document: 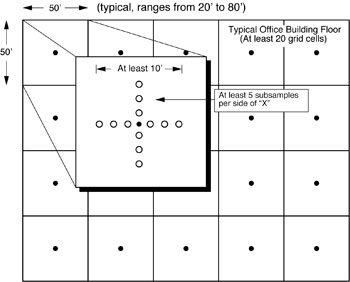 The AHJ is allowed some discretion when it comes to testing, but the document recommends voice-quality testing (using actual radios on the hip) on a uniform grid, as well as a method for determining the size of the grid and the pass/fail criteria. In addition to voice-quality testing, Annex O also specifies a method for collecting outbound signal-strength measurements with a spectrum analyzer or test receiver. Measurements are to be collected while walking in an X pattern, with at least five measurements per side of the X and at least one measurement every five feet. The collected samples then are linearly averaged and applied to the center of the grid cell. The gridding and signal-measurement methodology is shown in Figure 1 (below).

O.3.11 Maintenance: A broken system is of no use to anyone, and Annex O requires that the building owner have a service contract for emergency repair. The response time shall be no less than two hours. No time limit for system restoral is specified, but one must assume that time is of the essence.

Now that we’ve examined the major components of Annex O, let’s take a look at the building owner’s and the AHJ’s responsibilities regarding radio enhancement systems.

Responsibilities of the AHJ: The AHJ has many responsibilities and these responsibilities may be daunting unless expertise is available in-house or an outside expert is retained. First and foremost, the AHJ must decide which buildings fall under the jurisdiction of Annex O. New buildings only? All buildings of more than 100,000 square feet? Existing buildings that have undergone recent modifications?

The AHJ also must specify the frequencies to be amplified on the system, being mindful of any new frequencies planned by the public-safety agency in the future. Because all amplification systems introduce time delays, the AHJ must specify the maximum delay (in microseconds) that can be tolerated by the radio system. Usually, only narrowband channelized amplifiers introduce enough delay to cause problems in overlap coverage areas. The AHJ must review RES permit applications and issue permits for new systems. And finally, the AHJ must ensure qualified technicians are available to review test plans and oversee testing.