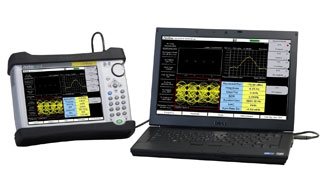 Anritsu recently introduced the S412E LMR Master handheld analyzer, which covers a frequency range from 500 kHz to 1.6 GHz. It was designed specifically to test Project 25 and NXDN digital narrowband systems, as well as systems using Long-Term Evolution (LTE), which the Federal Communications Commission has mandated for public safety on its 700 MHz broadband spectrum. 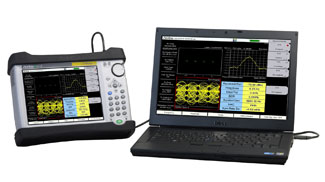 “This is important, because these are battery-powered instruments that are intended to be used at public-safety sites, which often are remote. When you get there, you want to have all of the stuff you need to verify the base station or repeater,” Brinkoetter said. “Without a test generator, you can’t test the receive side.”

Also important is the device’s ability to test both public-safety digital narrowband and broadband systems, because the federal government clearly wants the public-safety community to benefit from 4G technology, Brinkoetter said.

“So, it’s very likely that sites in the future will have both types of systems — narrowband and broadband. When a technician goes to those sites, he’ll have the advantage of having both test capabilities in one instrument, which reduces the number of boxes he has to carry up the mountainside,” he said. “A lot of these sites are snowmobile sites, and having to have a lot of pieces of equipment in the back of that snowmobile — or Jeep — is a burden.”

The device also provides coverage mapping for bit-error rate (BER) and received signal strength indication (RSSI) testing. All BER and RSSI measurements are tagged with the GPS location, and the data is imported into a Google Earth file that is housed on the device.

“So all a technician has to do is grab a USB stick, and put it into his PC to see the coverage map,” Brinkoetter said.

This capability is crucial because, even though the vendor typically performs a series of drive tests to verify system coverage, there always are borderline issues and areas that, while annoying to a cellular customer, would be quite serious for first responder.

“It’s one thing to experience a dropped call and you can’t talk to your wife for a few minutes — that’s not too bad,” Brinkoetter said. “But in public safety, if there’s a coverage hole, they need to know that they shouldn’t pull anyone over in that spot, because they won’t have communication. That’s a big deal.

“Maybe it’s a new building that’s creating multipath, or an interferer that’s reducing the signal to noise. All of a sudden there’s a hole that’s a surprise event. The technician has to go out and verify that, and it would be a very simple thing for him to drive to the area and use this device to create a coverage map. It tremendously simplifies what he needs to do.”

The device also is able to compute BER from voice or control-channel traffic. “This is something no one else does,” Brinkoetter said. “So, they don’t have to take a channel or a repeater out of service to make these measurements.”

This is important, because taking a public-safety channel out of service “almost requires the mayor’s approval,” according to Brinkoetter. “It’s not the type of thing that a technician typically can do on his own, because of the life-threatening issues that wrap around that.”

Brinkoetter said that, while signal-strength test is adequate for verifying coverage for non-P25 systems, a BER test is the only reliable way to do so for a P25 system.

“Testing signal strength is not enough, because there could be multipath [interference] that distorts the waveform. So BER is the ultimate test. To that point, the P25 architecture has a couple of BER test patterns, to allow people to verify coverage.”