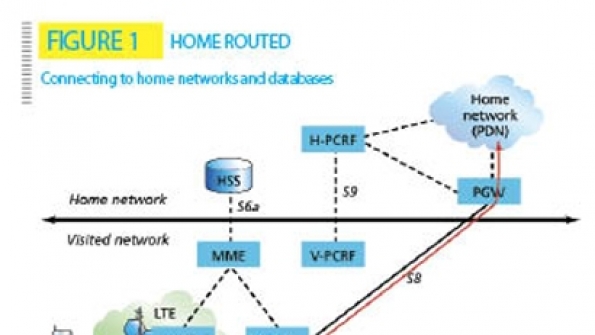 Long-Term Evolution technology will enable nationwide roaming, which is the key to widespread interoperability.

One vital lesson that has been learned from major crises — such as Hurricane Katrina and the Sept. 11, 2001, terrorist attacks — is that interoperable communications are of critical importance to first responders. When lives are in danger, police officers, firefighters and emergency medical teams must be able to communicate with each other clearly and immediately, or precious time and possibly lives will be lost.

In today’s land-mobile radio (LMR) networks, mobility and roaming between networks is very limited for a variety of reasons, including the lack of a common technology among the organizations assisting in the response, even when they are neighboring entities. In some areas, standardized Project 25 digital technology is used for LMR. However, these standards — developed specifically for public safety — have been slow to evolve. They were not designed to support easy roaming among first-responder networks, even though public-safety agencies often are mobilized from across a wide geographic area during emergencies. To maintain their communications capabilities, authorized first responders from other jurisdictions must be able to roam onto the network that is serving the incident area. They cannot rely on commercial networks to provide this service continuity, because these networks often become congested from the high volume of commercial traffic that results from the incident.

In contrast, automatic and secure roaming has been an integral part of commercial mobile networks from their initial introduction. Building broadband public-safety networks on commercial Long-Term Evolution, or LTE, technology will allow these same roaming capabilities to be leveraged for public-safety networks, enabling a faster and more cohesive response in cases of national emergency, such as when severe weather threatens millions of people — or whenever local, state and federal agencies need to work together more efficiently.

Widely embraced by public-safety organizations and identified by the Federal Communications Commission as the technology for the proposed nationwide broadband public-safety network, LTE wireless technology enables a giant step forward in interoperability. Based on Third-Generation Partnership Project (3GPP) standards, this all-IP technology supports an open-device ecosystem and allows easier communication across disciplines and jurisdictions, capabilities that are taken for granted in commercial wireless networks. And with LTE’s inherent support for roaming, first responders can gain access to essential services over any LTE network — including commercial networks.

Public safety also can expect to leverage a broad choice of devices, equipment, and applications that are enabled by the wide-scale deployment of LTE and other commercial standardized broadband technologies.

In other words, public-safety personnel will be able to roam into other jurisdictions and communicate instantly and easily using LTE devices. So, no matter where they must go, first responders will be able to use familiar devices, connect to other agencies — and still be linked to their home networks. These capabilities make LTE the best technology to truly support nationwide interoperability for public safety, and the most promising for delivering next-generation, multimedia, mission-critical applications.

Other benefits of LTE to first responders include:

LTE standards define how roaming can be implemented, whether it occurs across public-safety LTE networks — or between public-safety networks and commercial wireless networks — using either LTE or other radio technologies.

As defined by the 3GPP standards, roaming occurs between LTE networks that use a different Public Land Mobile Network identity (PLMN id). (So, traveling between jurisdictions within the same PLMN id is not considered to be roaming.) The standards support two architectural options for roaming between LTE networks (either public-safety or commercial LTE networks). Because they reflect how users connect to various networks, they are called the “home routed” and “local breakout” options. The FCC has identified both options as required functionality for public-safety LTE networks, and both provide critical capabilities.

Home-routed option. This approach provides first responders and other public-safety personnel with the ability to securely connect to their home networks while visiting other LTE networks, as shown in Figure 1. This functionality is critical for access to public-safety databases, such as NCIC and NLETS, and facilitates the proper security and logging of transactions in the home network.

Local-breakout option. Local breakout is crucial for public safety as well, because it allows the most efficient access to services available in the visited network — including access to the Internet and local incident information. When mission-critical voice is involved, it enables visiting responders to easily and securely be added to talk groups that are supporting the response effort.

When a user is roaming into another network, the visited network retrieves subscriber information from the Home Subscriber Server (HSS) and authenticates the user. Authentication includes identifying the networks to which the user is assigned. With LTE, a single user can connect to multiple packet-data networks (PDNs) simultaneously. The home-routed option may be used for some PDNs and corresponding applications, while others can use local breakout.

The policy associated with each connection also is determined by the home network, using a combination of HSS and policy information. But the visited network has the ability to accept or reject a request based on roaming agreements. Any charging settlement is provided over the Transferred Account Procedure (TAP) interface defined by the 3GPP.

Figures 1 and 2 show that several interfaces are required between the home and visited LTE networks to support roaming, most notably the S6a, S8 and S9 interfaces. To enable secure network roaming, security associations between LTE networks initially may be provisioned on a pair-wise, peer-to-peer relationship between the various elements in both operators’ networks, governed by a roaming agreement. Note that it also is possible to hand off active sessions across LTE networks, which would require additional interfaces between the two networks. 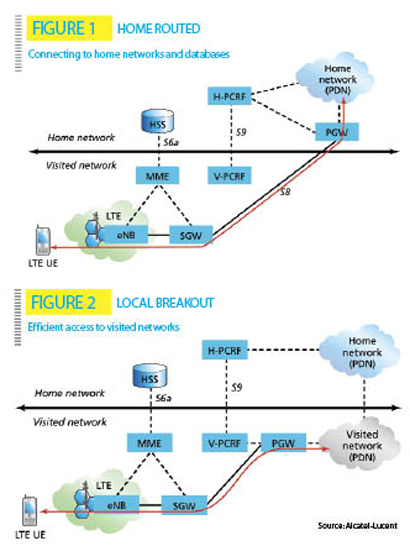 To scale to a larger, nationwide public-safety network, these pair-wise security associations must be avoided. Instead, a roaming-exchange network should be leveraged, run by a third-party clearinghouse. A border gateway would be used to securely connect the roaming-related network interfaces to the roaming-exchange network. This approach enables secure connections between Mobility Management Entities (MMEs), Policy and Charging Rules Functions (PCRFs), Serving Gateways (SGWs), Packet Data Network Gateways (PDN-GWs) and Home Subscriber Servers (HSSs) in the visited and home networks for roaming purposes.

In addition to the two inter-LTE networking roaming options, the 3GPP standards also support roaming and handoff with other wireless networks that are based on 3GPP or 3GPP2 wireless access technologies. These standards enable public-safety users to roam onto commercial networks when no public-safety network is available.

LTE is a key technological breakthrough that can finally offer true nationwide interoperability to public safety using their private systems. Through its inherent roaming capabilities, it can enable a comprehensive nationwide first-responder communications system that meets local, state and federal needs — and facilitates communication among all of these jurisdictions. In this way, it achieves the vision of a single, unified network, regardless of location or device.

Maria Palamara is the product management director responsible for Alcatel-Lucent’s end-to-end LTE solution for mission-critical applications. Wim Brouwer is the CTO for the same area.