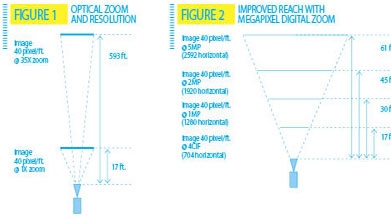 Capturing images is the easy part; getting them to where they need to go is the next — and much more challenging — step.

Developments in the surveillance industry continue at an ever-increasing pace. Over the past decade or so, the industry gradually has migrated from analog-based solutions to purely IP-based systems. In a digital, IP-based surveillance solution, as long as a network connection with sufficient bandwidth exists, cameras can be aggregated into an integrated surveillance system, which allows for viewing of camera feeds from multiple locations at a single monitoring site.

Many cities and public-safety organizations have embraced this possibility by upgrading their in-building surveillance systems to IP-based solutions, with additional cameras placed in multiple areas of interest throughout the city, such as downtown areas, high-crime neighborhoods, parking lots and garages, parks, and schools. In designing larger-scale camera surveillance systems, particularly with cameras in multiple locations, a key consideration is how much backhaul capacity is required.

Another, of course, is how to provide sufficient backhaul capacity in the most cost-effective manner.

As new IP cameras introduced to the market in recent years have provided increasingly better resolution, the backhaul requirements also have increased due to the growing bandwidth demands of these megapixel cameras. This has further complicated the design of the backhaul network. Also, there are several options available for providing the backhaul network connection — fiber, Ethernet and wireless. Furthermore, within the wireless category, several choices are available, such as Wi-Fi-based (802.11a/g or 802.11n), WiMAX, microwave and millimeter wave (60/80 GHz).

In this article, we will review the process for selecting cameras, with a specific focus on the choice of camera resolution. Then we will examine encoding schemes and frame-rate considerations, which will have an impact on the bandwidth requirements for the camera network. Once the bandwidth requirements have been determined, the backhaul design can begin. Finally, different backhaul options are reviewed in reference to practical-use scenarios.

Before the advent of megapixel camera technology, the industry standard for high-resolution cameras had been 4CIF, or 704×480 pixels. When assuming a resolution goal of 40 pixels per foot, the coverage width is limited to 17.6 feet. So, when the camera lens is set to 1X zoom, the plane of interest is limited to a distance of 17 feet away from the camera. However, this distance can be increased by using optical zoom, as the angle of view is decreased accordingly. A typical pan-tilt-zoom (PTZ) camera with 35X optical-zoom capability can increase the distance from 17 to 593 feet, while still achieving the goal of 40 pixels per foot at the plane of interest with a coverage width of 17.6 feet. (See Figure 1.) 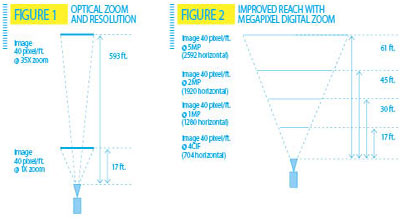 Once a proper camera selection for each of the surveillance locations is made, an estimate of the required bandwidth is possible. But even after selecting the type of camera and resolution, some very important factors still need to be considered that impact the bandwidth numbers. These parameters are frame rate and encoding algorithm.

Also, image compression can be applied to assist in bandwidth reduction. Table 1 shows the bandwidth requirements per camera for different encoding algorithms and image resolutions, based on a typical outdoor surveillance scene and assuming a 30% image compression and a frame rate of 12 frames per second. With this table, it is possible to calculate for each surveillance location what the backhaul requirements are.

Of these encoding algorithms, H.264 is a fairly recent introduction, but is now commonly available in most leading IP cameras and supported in the video-management solutions. Specifically, when using megapixel cameras, H.264 has been able to bring the bandwidth and storage requirement to manageable numbers.

In designing the backhaul to connect the camera sites with the management server and monitoring system, it makes sense to the first consider the possibility of implementing a wired solution. Is a network connection with spare capacity already available to reach a camera site? Or can new cabling be implemented cost effectively? Gigabit Ethernet (GigE) is now commonly available, and provides theoretical speeds of 1 Gbps. Generally providing sufficient bandwidth for most security applications, GigE systems would be a logical choice for any new deployment.

Copper Ethernet wiring (typically Cat-5, Cat-5e, Cat-6 or Cat-7) have a practical length limitation of 100 meters (or about 300 feet) between devices. Another option to consider is the use of power-over-Ethernet at switch ports, since many fixed IP surveillance cameras allow for a PoE power supply (this is even applicable to some models with outdoor enclosure), resulting in a more cost-effective implementation.

To accommodate longer-length wired network connections, fiber can be used. Most networking products now allow for seamless integration of fiber-based connections, with fiber ports available at switch or router devices. To give an idea of the type of distances that are possible with fiber, single-mode fiber connections enable distances exceeding 10 miles.

The problem is that, in citywide type deployments, wired cabling often does not exist, and the cost for new cable implementations can be very expensive. In those situations, wireless technologies can be reviewed to complete the backhaul design.

In typical camera designs, we can recognize two types of wireless aggregation. First, we can speak of “clustering”, where several sites are connected to one central node. Because only a few camera sites are considered here, bandwidth requirements are relatively low. Both point-to-point and point-to-multipoint wireless architectures are suitable and available. Often, Wi-Fi-based solutions are utilized in camera clusters. Meanwhile, WiMAX solutions slowly are being introduced.

The advantages of WiMAX compared to Wi-Fi are visible primarily in applications involving a larger number of camera sites within a small, contained area. But drawbacks include higher cost and the maximum channel width, which currently is limited to 10 MHz (in comparison, Wi-Fi technologies support 20 MHz- or 40 MHz-wide channels). Typical throughput is in the 5 to 40 Mbps range, but that will depend on many factors, including technology, channel size and distance.

In regards to spectrum selection, the licensed 4.9 GHz public-safety band is the logical choice. But the spectrum is limited to 50 MHz, and a larger-scale network generally should use 5 MHz- or 10 MHz-wide channels, which would limit to an extent the ability to implement megapixel cameras. When considering the use of unlicensed spectrum, the 2.4 GHz and 5.8 GHz bands generally are very crowded and not suitable. However, the more recently introduced 5.4 GHz band, with 255 MHz of available spectrum, is generally the best bet, and it also enables the use of larger (20 or 40 MHz) channels.

When considering the use of unlicensed spectrum, the 2.4 GHz and 5.8 GHz bands generally are very crowded and not suitable. However, the more recently introduced 5.4 GHz band, with 255 MHz of available spectrum, is generally the best bet, because it enables the use of larger (20 or 40 MHz) channels. Note that both Wi-Fi- and WiMAX-based technologies in 4.9 GHz or 5.4 GHz claim the possibility of non-line-of-sight connections (i.e., a connection while an obstruction is available in the wireless path). Generally, however, the throughput and predictability of the link are severely compromised in such situations. The wireless design should therefore always target line-of-sight connections whenever possible.

For higher-capacity connections in licensed spectrum, various microwave solutions are available that provide throughput up to several hundreds of Mbps. Typical bands include 6, 11, 18 and 23 GHz. With a variety of antenna sizes, long links can be achieved if required. On the other hand, in the 23 GHz band, highly compact, all-outdoor solutions now are available, with an antenna size of only 1 by 1 foot. Costs also have been reduced in recent years, reducing the obstacle to integrate professional microwave wireless solutions into a wireless camera backhaul design.

For the highest-possible capacity, solutions in the 60 and 80 GHz range offer data rates on the order of 1 Gbps. Propagation characteristics in this band are less advantageous, so link distances are shorter compared to microwave solutions.

In the end, the camera-backhaul design will require a detailed comparison of different options and, possibly, a trade-off of various technologies. In many cases, the ideal backhaul design for a multi-location surveillance solution will use a combination of wired and wireless technologies that are seamlessly integrated into a single, digital, Ethernet-based aggregation network.

The design not only should take into account the needs of the current camera design, but ideally also consider possible future expansions. On the other hand, there generally is a finite budget that needs to be considered in the design. For example, it might turn out that the backhaul network cost to accommodate a targeted camera design is cost prohibitive. In that case, some adjustments to the camera design will be necessary that reduce the backhaul requirements.

Jasper Bruinzeel is vice president of marketing and sales for CelPlan Technologies.