The APX 6000XE is a P25 radio featuring the latest AMBE vocoder that is upgradable to P25 Phase 2.

LAS VEGAS — Motorola Solutions this week is announcing the APX 6000XE, the latest in the line of the company’s APX P25 series of portable radios that is designed to provide the highest levels of APX functionality in a single-band radio that is smaller and more affordable. 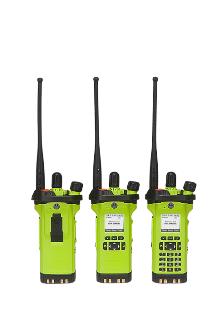 On display at the International Wireless Communications Expo (IWCE) show, the APX 6000XE is a P25 radio featuring the latest AMBE vocoder that is upgradable to P25 Phase 2, said Brenda Herold, Motorola Solutions’ vice president of subscribers and infrastructure. The radio includes the extreme ergonomic characteristics included in the APX 7000XE, including an exaggerated control, rugged design, as well as GPS and text-messaging functionality.

Herold said the primary difference in the APX 6000XE is that it is a single-band portable — the APX 7000 series is a multiband solution — which allows for a smaller form factor and a less expensive pricetag.

“It’s several thousand dollars cheaper,” she said. “It’s an economical solution for our customers that provides some of that backward and forward compatibility. We believe this offering provides some opportunities, based on department needs, budget and what is going on.”

The APX 6000XE may be particularly appropriate for use by emergency-medical personnel, who should be able to operate a smaller-form-factor radio than firefighters using large gloves.

“What this means is the user doesn’t have to turn to speak,” Herold said. “In many instances now, the location of where their [speaker microphone is located] is critical to what happens with the voice. It means they can keep their attention on that incident and what’s going on in front of them and that audio can be totally clear going back to dispatch.”