The updated version, dubbed VX2, features a larger LCD screen on the back of the microphone, a larger lens that increases the field of view, increased storage (8 GB), and improved battery life.

Vidmic is unveiling this week at IWCE 2011 in Las Vegas the next generation of its shoulder microphone that incorporates digital video and still cameras, and which is designed to be used by law-enforcement officers and fire inspectors. 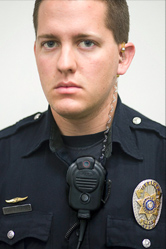 The updated version, dubbed VX2, features a larger LCD screen on the back of the microphone, a larger lens that increases the field of view, increased storage (8 GB), and improved battery life — up to 12 hours in standby mode and 4 hours of active video recording. In addition, video resolution has been upgraded to the VGA standard and a panic button has been added.

The obvious application for the device is law-enforcement surveillance, but the fire service also is an important target market, according to Todd Haynes, Vidmic’s CEO.

“We have the device in several departments, and they use it primarily to record the scene itself, before the fire and after the fire,” Haynes said. “The fire investigators also use it to record the audience. It’s not an obvious device. So they can turn around and scan the crowd, and then can go back later and identify an arsonist. In an arson case, they apparently always return to the scene.”

Haynes added that the video also can be used after the event as a training tool. “You can review the video and say, ‘For safety reasons, don’t enter the building this way.’”

A key component of the system is the company’s digital evidence-management software, which ensures that any footage or images captured by the device remain secure though the chain of custody, Haynes said.

“You can’t download the evidence [from the device] without pairing it to our software, which tracks everything that’s done to the evidence from the time that it was recorded — every touch and view from that point forward,” Haynes said. “That maintains evidence integrity throughout the entire process.”

He added that there’s not much that the system allows users to do to the evidence once it has been downloaded from the shoulder microphone.

“Depending on your authorization level, you can view the video and make annotations to it — case or citation numbers, searchable strings or descriptions, those types of things,” Haynes said. “You also can split the video. Let’s say that you have a two-hour video, but only two to three minutes of valid information. You can create an alternate piece of evidence from the original, so that you only have that two-minute clip. But once it’s recorded, it’s considered evidence — regardless of whether it’s associated with a specific case or incident — and they can’t delete or manipulate it.”