Carlson Wireless has developed RuralConnect IP, a software-defined radio that uses the slivers of VHF and UHF spectrum not used by television broadcasters — known as “white spaces” — to deliver wireless broadband service to homes, businesses and municipal entities in rural and underserved areas. The company worked with database provider Spectrum Bridge and KTS Wireless, a wireless engineering firm headquartered in Lake Mary, Fla., that specializes in white-space technologies to develop the radio. The company hopes to receive Federal Communications Commission certification for the device — which is targeted primarily to the wireless Internet service provider sector — in May, said Jim Carlson, president of Carlson Wireless. 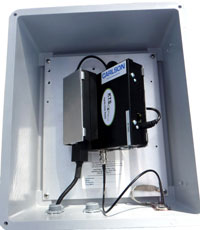 “It turns out that about 20 percent of WISPs can’t [serve] all of the customers in their zones due to line-of-sight issues stemming from terrain or foliage,” Carlson said.

The company has received an experimental license from the FCC to test the radio on lands occupied by the Yurok Tribe in the Klamath River region of Northern California. The tribe is the state’s largest with about 5,000 members and its tribal lands cover roughly 63,000 acres of rugged terrain that is marked by a deep canyon that stretches for 25 miles and heavy foliage, conditions that render other broadband wireless technologies ineffective.

In addition, the tribe’s culture demands that nothing interfere with its “viewscape.” This means that any infrastructure that would be deployed would have to be so subtle that it would be exceedingly difficult to achieve line-of-sight communications.

“It’s an area that wouldn’t have broadband if they weren’t able to utilize the television spectrum,” Carlson said. “Our radio is designed for areas such as this one, where the terrain or foliage is so tough that microwave isn’t feasible or practical. By using the VHF and UHF spectrum, we can get better hill-and-valley coverage as well as foliage [penetration]. The test showed that the radio works well in very adverse conditions.”

Carlson added that satellite service also is infeasible for delivering Web traffic in such an area, even if the line-of-sight challenges didn’t exist, because it is plagued by delay and capacity issues.

However, the radio has application beyond bringing broadband services to rural or underserved areas, Carlson said. For example, the California Department of Transportation (CALTRANS) has talked to the company about deploying the radio.

“They came in and said, ‘This is a big deal to us,'” Carlson said. “There are so many different places where, if they had a wireless connection, they’d be able to have cameras or [share] data information about road closures for safety. They’re real excited about the ability to use VHF and UHF frequencies.”

The initial version of the radio offers bandwidth of 5 MB, plenty for the types of cameras that CALTRANS utilizes, which operate just fine on 1 MB, according to Carlson. But as the product matures, Carlson believes the company will be able to combine channels to create a much fatter pipe.

“You can ‘turbo’ it, as I call it, just like Wi-Fi is turboed, where you can bond two to four channels together,” he said. “So, in that 24 megahertz of bandwidth instead of six, the guard bands are concatenated internally and suddenly the bandwidth can go up to 100 megabits. We’re excited about that.”

Other potential public-safety and government applications for the radio, according to Carlson, include data delivery, monitoring electrical devices in places where line-of-sight communications are unavailable, and mobile command centers deployed to remote, mountainous or heavily forested areas.

Jim Carlson provides a product demonstration of RuralConnect IP at the California Wireless Internet Service Providers Association (WISPA) meeting.
Jump to the 2:30 mark of the video to see the demo.