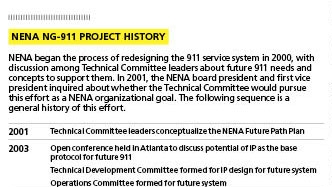 After years of work, key pieces of next-generation 911 architecture are in place and some early systems are expected to be deployed this year. But several hurdles still stand in the way of widespread adoption.

Over the past decade, public-safety officials have talked extensively about the promises, possibilities and challenges associated with transitioning the 911 emergency-calling network from its legacy, voice-centric, circuit-switched roots to an IP-based, software-intensive system capable of receiving and managing voice, data, image and video information.

This year, the movement to next-generation 911 (NG-911) is expected to move beyond the talking phase, as several public-safety answering points are preparing to deploy systems that are designed to provide the key infrastructure necessary to make the NG-911 vision a reality. 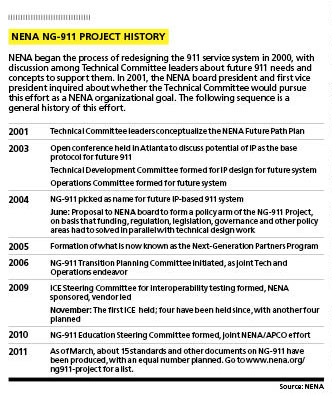 And the overwhelming consensus inside and outside the emergency-calling community is that such a migration is needed. After all, the architecture used in 911 systems was designed in the late 1960s, when black rotary phones connected to the legacy wireline telephone networks dominated the communications landscape and the power of computing was available only to governments and large enterprises with deep pockets and large rooms.

Today, most PSAPs receive more 911 calls from wireless phones than wireline. In fact, the Federal Communications Commission reports that almost 30% of residential customers subscribe to a voice-over-IP (VoIP) service. And modern mobile devices no longer are limited to voice communications, but also enable text, data, image and video transmissions.

Given this rapidly changing environment, the need to migrate the 911 system to an IP platform has become increasingly clear, particularly as many people assume that they can send multimedia transmissions to PSAPs, which actually are only capable of handling voice communications today.

While there is agreement about the need for NG-911, exactly how to make the transition to the new platform continues to be a topic of debate. Multiple vendors claim to have solutions that are ready for deployment or will be ready later this year, but questions regarding standards, operational impacts and funding threaten to slow the adoption of NG-911.

A key piece to the NG-911 puzzle is the creation and establishment of standards designed to promote interoperability of emergency-calling systems throughout the U.S. and to create a competitive marketplace in the 911 sector, which public-safety officials hope will increase choice and lower the cost of solutions.

To this end, the National Emergency Number Association (NENA) has been developing standards and guidelines over the past several years to provide PSAPs with a path to NG-911, with the most anticipated document being the i3 standard — which details the infrastructure and interfaces designed to provide the foundation of the next-generation architecture.

While waiting for i3 to be approved, ATIS approved the Request for Assistance Interface (RFAI), an interim standard endorsed by NENA as a transitional element that PSAPs could use to begin the transition to an IP platform until the i3 standard was completed.

In March 2011, many industry sources expected the NENA board to approve the i3 document, but 911 industry giant Intrado submitted a “procedural complaint” that has been the subject of an ongoing investigation that has delayed the adoption of the i3 standard. 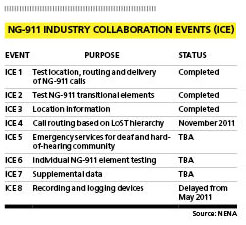 Most 911 vendors other than Intrado have expressed disappointment about the delayed consideration of the i3 document, but many sources believe that the i3 standard eventually will be adopted with little negative impact on the 911 industry. NENA officials have been understandably quiet about the situation, said Jeff Wittek, Cassidian Communications’ vice president of corporate business development.

“My strong suspicion is they are not going to say anything that would jeopardize the investigation and the approval, which will still take place at a subsequent meeting,” said Wittek, who noted that interoperability events have demonstrated the readiness of the i3 standard (see table). “i3 will be approved. I’m exceedingly confident of that.”

Thus far, the i3 delays have not altered the deployment plans of PSAPs. In Franklin County, Va., E-911 coordinator Bill Agee said that his regional 911 center is preparing to make the transition to an Intrado RFAI solution by the end of the summer, marking the culmination of four years of work — a time period that was extended by a lengthy negotiation regarding an interconnection agreement between Intrado and incumbent carrier CenturyLink.

Agee said that testing has shown that the migration to the IP platform via RFAI has resulted in “much clearer” calls and that he is looking forward to geo-spatial routing, which will allow him to redirect calls to the ideal PSAP based on the location of the caller. However, Agee acknowledged that RFAI “is not even halfway” to NG-911.

One of the differences between RFAI and the proposed i3 standard is that the i3 architecture will not require an ALI database, but it will have a functional equivalent, said Stephen Meer, chief technology officer for Intrado.

Meanwhile the York County (Pa.) Regional Emergency Communication Center has opted to migrate directly to an i3 platform provided by Cassidian and TCS, according to Terry Hall, director of emergency communications. 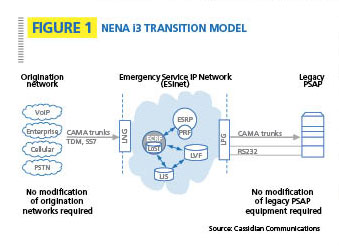 “It’s our goal to be taking … text messaging,” Hall said. “We figure six months is the earliest we’re going to be able to do it, and six to eight months is the goal.”

Both Hall and Agee said that they plan to cross-train call-takers to receive text messages, as well as customary voice calls. Learning the acronyms that are common in text messages is something that will require some work for those not accustomed to texting, but it will not be an issue for everyone.

“I think that some of the older dispatchers will have some growing pains with that and will have a longer learning curve,” Agee said. “But with the new ones we have in here — and that’s about half of them — we can’t keep them off their cell phones texting now. I think they’re going to pick it up really fast.

“Text messaging, I don’t see that as a big deal. We can handle that. But, when we go to video and pictures, that may be a different story. There’s going to be a lot more information.”

Hall echoed that sentiment, adding that it is important for PSAPs adopting i3 early to be flexible in their approach to establishing policies and procedures, as they try to integrate new multimedia capabilities into their daily routines. 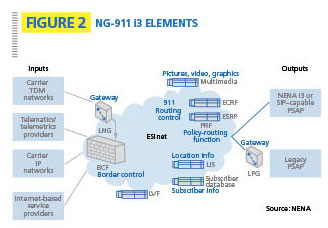 “Remember, nobody’s gone through this before, so there’s no benchmarking,” Hall said. “You don’t set up a training program for a technology that’s not finished being developed yet, because you really don’t know what’s going to be delivered.

“You have to adapt. You try to plan for the worst and hope for the best.”

In addition to potentially altering the daily operations within a 911 center, the migration to NG-911 also offers opportunities for PSAP directors to consider new ways to conduct business. (See “Growing pains.”). In a NG-911 environment, call routing and transfers between PSAPs are designed to be much easier, which creates the possibility for new backup plans.

Roger Hixson, NENA’s technical issues director, believes that most PSAPs will want to be part of regional networks with many other PSAPs in order to reduce the cost-and-maintenance burden. While some have speculated that NG-911 could spark additional physical consolidation of PSAPs, Hixson said that the new architecture may enable small PSAPs to remain in place, because they can leverage resources virtually through the IP network that connects the various emergency call centers.

Such an approach can be beneficial from both operational and fiscal perspectives, which is especially important during an era of tight budgets. If this strategy can be implemented effectively, it likely would be welcomed by many local law-enforcement officials, Agee said.

“In a lot of our counties, the sheriff runs the PSAP, and we do a lot more than just run the 911 center — we take their messages, we answer the admin lines for them, we do their warrants and a lot of things other than 911,” he said. “So, it would be tough for the sheriff in any of these counties to give up that individual control.

“If you were to consolidate and become a larger PSAP that just does 911, then the sheriff has to replace those people in those [other] roles.”

How to pay for it

Of course, migrating to a next-generation architecture will require additional funding, which is a chronic problem in the 911 sector in many places. For many PSAPs, collecting enough funds to maintain existing legacy networks and staffing levels is challenging enough in a difficult economy; the idea of simultaneously paying for technical upgrades to a NG-911 platform given the current financial models may seem far-fetched — at best.

Making the task more difficult is that lawmakers in many states have found unused 911 funding too enticing to ignore in an environment where budget cutbacks have become the norm. As a result, many surplus 911 funds have been raided by governments trying to make budget numbers work without increasing the tax burden any more than is absolutely necessary.
There is some hope within the public-safety community that federal money will be dedicated to addressing the funding gaps that must be bridged to make the NG-911 vision a reality. But many first-responder officials question whether lawmakers can find the needed funds in a tight budget year with voters demanding spending cuts, not new programs — especially when public safety seems more intent on securing spectrum and funding for proposed 700 MHz LTE networks nationwide.

Even if Congress does pass legislation that authorizes funding for NG-911 deployments, PSAPs have learned — the hard way — not to assume that the money will be available. In 2004, Congress passed an 11th-hour bill authorizing $1.25 billion to be spent over five years to help fund Phase 2 wireless upgrades for PSAPs throughout the nation.

Last year, the bill expired without any money being appropriated through the traditional budgeting process ($43.5 million was dedicated from 700 MHz auction proceeds). To date, no legislation that would provide NG-911 funding has generated significant momentum on Capitol Hill.

While the political and economic climate for such proposals is challenging enough, there is an even more fundamental problem at the moment: No one really knows how much it will cost to migrate to NG-911, so no one is sure how much funding should be requested from Congress.

One aspect of the FCC’s Broadband Plan released more than year ago called for the agency to conduct a study that would provide a cost estimate for NG-911. Work on this task has begun and there is some hope that the study can be released during the second half of this year, but many question whether a realistic cost projection can be provided so soon.

Hixson said that the NG-911 market is so nascent that vendors have yet to figure out how to price their next-generation solutions. He pointed the results of a recent RFP as evidence. 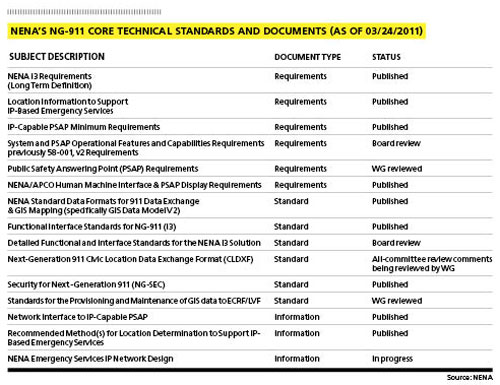