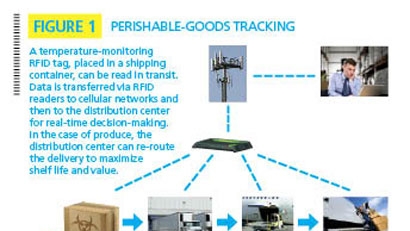 New laws and regulations are putting increased pressure on food and pharmaceutical companies to ensure the integrity of their products.

Companies that sell food and drugs in the United States face increasing pressure to improve control over their supply chains. One source of that pressure is the federal Food Safety and Modernization Act, which was signed into law last January. This legislation instructs the Food and Drug Administration to focus more on preventing food contamination, rather than simply responding to incidents after the fact. That means food will undergo more inspections as it moves from producer to consumer.

Meanwhile, drug companies soon will face new requirements for tracking and tracing their products. The FDA still is developing those rules and has not yet said when they will kick in. But starting in 2015, the state of California will require vendors to provide item-level electronic pedigrees for half the pharmaceuticals they ship into the state.

Partly in response to new regulation, and partly to address long-standing concerns about safety and shelf life, technology vendors are promoting solutions for monitoring food and pharmaceuticals during distribution.

For instance, Intelleflex of Santa Clara, Calif., offers a system based on radio-frequency identification technology that is designed to identify problems with perishable product in transit.

Combining a temperature sensor with a battery-assisted semi-passive (Class 3) RFID tag — which is affixed to a pallet or other conveyance — the Intelleflex solution continuously records a product’s temperature, creating a history of up to 3,600 time-stamped data points. At any point along the supply chain, a company can use an RFID reader to capture the product’s temperature history. Based on that, the remaining shelf life can be determined.

“If you do that at the pallet level, we believe — and studies from the Universities of Florida and Arkansas and Georgia Tech have shown — you can recover a good amount of what is disposed of today,” said Peter Mehring, the company’s chief executive officer.

The tag also can capture a time-stamped identification number from each device that reads it, which creates a record of the product’s physical progress. So if a problem arises — for example, if a pallet-load of beef becomes too warm — it’s easy to discover where the anomaly occurred, Mehring said. “And then you can also say who should have known about the problem, because they actually read the data off the tag.”

The Hawaii State Department of Agriculture recently used Intelleflex’s technology in a pilot project funded largely by the vendor and Global Tracking Systems, a Taiwanese vendor of plastic pallets. The project tracked the condition of boxed produce loaded onto 100 pallets as they moved among distribution centers belonging to Honolulu-based Armstrong Produce.

Workers used Motorola 9090G handheld computers to read bar codes on the boxes and the RFID tags on the pallets, in order to track the produce from warehouse to truck to airport, on and off the plane, onto another truck and into a second warehouse.

“That gives us RFID traceability on the boxes, but also on the pallet and the temperatures,” said John Ryan, the state agriculture department’s administrator for quality assurance, speaking in advance of the trial, which was scheduled for early May.

The system that was to be used in the trial features a cloud-based application that stores and displays the data collected from the readers. “This will allow the people at Armstrong Produce to look at temperature profiles as well as time between drop-off and pickup, how long they sit on the tarmac and all that,” Ryan said.

Intelleflex also markets its technology for tracking the condition of biopharmaceuticals. “They need to be maintained at 5 degrees Centigrade, plus or minus three, otherwise they may lose their efficacy, or maybe even turn dangerous,” Mehring said. The Class 3 RFID tag is particularly effective for this application, because it can send and receive signals through objects with a high-water content, such as the biopharmaceuticals themselves, or the liquid-filled coolers used to transport them, he said. 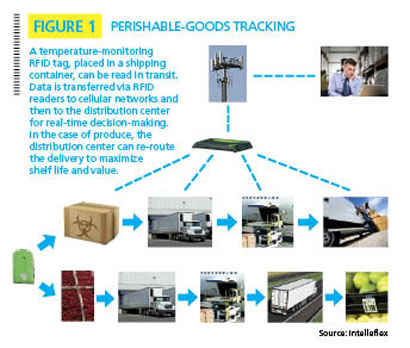 Another method for protecting perishables in the supply chain is to monitor not the product itself, but the unit that controls the product’s temperature. Systems attached to cooling units on refrigerated trailers take this approach.

One example is ColdLink, offered by PLM Trailer Leasing, a Montvale, N.J., firm that leases, rents and maintains refrigerated trailers. Through a partnership with Star Trak Systems of Morris Plains, N.J., which developed the technology, PLM has installed the ColdLink hardware on its trailer fleet and offers the monitoring service as an option to its customers.

Managers of restaurants and other establishments that buy from food service distributors are very concerned about maintaining proper temperatures in transit, said Don Durm, director of agency development and national account manager at PLM. Even if it arrives safe to eat, food that isn’t handled properly loses commercial value. “For every two degrees that meat drops in core temperature, it loses 10% shelf life,” he said.

ColdLink integrates a sensor into the cooling unit to monitor temperature inside the trailer, while a global positioning system (GPS) unit tracks the trailer’s location. The system checks the temperature every 15 minutes, transmitting the information to a data center over a GSM/GPRS wireless network. Customers can access current and historical information about their freight via the Internet.

When they configure the system for their own use, customers can ask to receive alerts whenever the trailer’s temperature strays outside the optimal range for a specified period. “Messages can be sent to your mobile device, so you don’t have to access the Web site,” Durm said. “You can also monitor door openings, which is very critical in food distribution,” he added.

Because the system is connected to the cooling unit’s microprocessor, a technician can control that unit remotely, turning it on or off, changing settings and reading fault codes to diagnose and correct problems. “If I set the temperature at 32 degrees, if the driver somewhere along the route changes it, I can be notified of that,” Durm said. “And then I can also change it back when he’s driving down the road.”

Unlike ColdLink and Intelleflex, Harvest Mark, a product of YottaMark in Redwood City, Calif., doesn’t monitor fresh produce in transit. But if you’re wondering whether the bagged salad in your basket came from a farm that’s connected to a recent contamination outbreak, this system might be able to tell you.

A grower using HarvestMark affixes a series of coded labels to produce in the field or in the packing shed. The grower can attach labels either on cases of produce or on individual products — on clamshell boxes of tomatoes, for example.

Each label contains a unique ID, which YottaMark associates with any data the grower wants to record. “That could be at a minimum the farm and the date,” Grant said. But the entry also might identify the crew, the picker, the variety of produce, a time stamp or other details.

YottaMark hosts the database that stores this information and offers various means for getting the data into the system. In one popular method, the grower attaches copies of the first and last labels in a series to a paper form, completes the form with the relevant information and faxes is to YottaMark for data entry.

The database makes it possible to trace any produce back to its origin, even if the consumer has discarded the packaging. This is helpful for implementing product recalls, Grant said.

Say, for example, that numerous people become sick after eating sprouts that investigators trace back to four retail stores. If those sprouts are in the database, YottaMark might determine that all cases of this brand of sprouts delivered to the four stores over the past two weeks came from a particular farm. Distributors could then recall any other sprouts with the same origin “Today, that’s not possible, or it’s extremely laborious to do, because it would be a manual treasure hunt,” Grant said.

HarvestMark conforms to data standards set by the Produce Traceability Initiative (PTI), an industry effort to develop tracing systems for the fresh produce supply chain. PTI is a voluntary initiative, but it’s based on the expectation that the Food Safety Modernization Act will make traceability mandatory in the next three to five years, Grant said.

While distributors, retailers and health officials can use case-level HarvestMark labels to assist in product recalls, consumers can use item-level labels to gain peace of mind and satisfy their curiosity. A consumer who wants information about a box of strawberries, for example, can go to the HarvestMark Web site and enter the code on the label to gain a link to information about the farm and the grower, as well as any relevant food-safety notices.

The consumer might also scan a two-dimensional bar code on the label with an iPhone to obtain the same information. YottaMark was due to release a similar app for Android phones in May. It also has beta-tested the ability to transmit the ID code via text message, an application that could prove important for tracing the pedigree of produce and pharmaceuticals in countries where smartphones aren’t prevalent, Grant said.

YottaMark already serves the pharmaceutical industry with other solutions, and it expects to market a version of HarvestMark to drug companies, Grant said. “Clearly, if I can make this work cost-effectively for a $2 watermelon, it is going to work for a $20 pharmaceutical.”