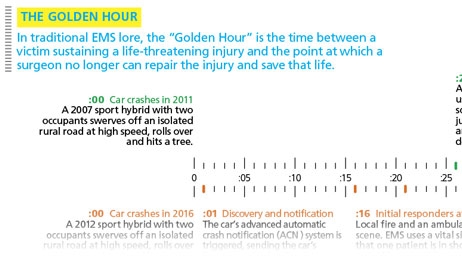 The first civilian ambulance services in the United States started in New York City and Cincinnati in the 1860s. However, for the next 100 years, what people got when they called for an ambulance was little more than a horizontal taxicab. In 1966, a federal white paper cited the potential for emergency medical services (EMS) to save lives when severe injuries occur — as opposed to inadvertently killing patients through ill-informed care and movement of the injured, which often was the case. Passage of the EMS Systems Act of 1973, plus infusions of federal and private foundation grant money around that time, launched the widespread, systems-based, modern EMS system that the nation enjoys today.

Emergency medical technicians, or EMTs, have hundreds of hours of training and provide careful management of the injured and critically ill; they also provide numerous life-saving interventions. Paramedics generally possess a minimum of 1,000 hours of training — some have more than 2,000 hours — provide advanced and critical-care treatment once only offered in hospitals by physicians, as do critical-care paramedics and nurses assigned to helicopter EMS (HEMS) units.

Paramedics in urban and suburban areas have high call volumes and relatively short transport times — which gives them valuable experience in terms of maintaining their clinical skills and acting independently — but also have access to nearby resources needed to respond effectively to more complicated, time-critical cases.

For rural areas, however, a “paramedic paradox” exists. Without nearby hospital resources to back them up, EMS professionals in these settings should be the most highly trained paramedics, able to provide diagnostic and treatment interventions beyond the capabilities of their urban colleagues. But rural areas are the least likely to financially support this level of provider and paramedics in these settings have a hard time retaining their skills because of low call volumes. This urban/rural dichotomy contributes to very different needs and directions in EMS communications and other technologies of the future.

In the horizontal taxicab days, the ambulance often would arrive unannounced at the hospital ER, providing staff with no time to prepare to effectively receive the patient. In the early 1970s, VHF radios — using frequencies dedicated to EMS, were installed in ambulances for this purpose — as well as to request physician direction. Later, UHF radios, also on specific EMS frequencies, began to be used for regional communications coordination and to send electrocardiogram (EKG) strips for interpretation by physicians and to receive subsequent orders for paramedic intervention. These radios often were paid for by federal EMS grants, which were designed to encourage EMS agencies to improve training and otherwise modernize.

Over the past 40 years, however, little has changed and narrowband voice communications remain the standard (though trunked narrowband has been deployed in some areas). When EMS professionals at the scene wanted to discuss patients with a physician without a “scanner land” audience, they sought out landline telephones. This is still done, but cell phones have been placed in most ambulances for this purpose. In fact, their use has become so prevalent that state EMS agencies have had to strengthen LMR capabilities for their ambulances so that EMTs and paramedics do not become overly reliant on this sometimes-unreliable commercial-based technology. Commercial systems also are being used for medical telemetry. Paramedics have become proficient at interpreting basic electrocardiograms and other diagnostics, and commercial wireless broadband is being used for 12-lead EKG and other patient electronic data transmissions. However, while the National Association of State EMS Officials has encouraged piloting in these areas, it also has cautioned against a reliance on commercial wireless and unlicensed frequency broadband systems for critical patient communications.

Over the past several years, numerous forums have been held to identify the key capabilities and technologies needed to carry out EMS in the future, and to help communications planners predict infrastructure, bandwidth and cost implications. While the needs and technology applications may play out differently in urban and rural areas, one common theme is evident: EMS can’t progress without broadband.

Another common theme is that, in treating critical patients, sequential processing of actions must be replaced by parallel processing. This is needed to improve speed and appropriateness of care and transport in time-critical events — think the “Golden Hour” applied not only to major trauma, but to stroke, heart attack and other life-threatening situations — and to decrease the use of expensive resources when not needed, e.g. a $10,000-plus helicopter ride. However, parallel processing is easier to accomplish in a hospital, which has resources seconds or minutes away, than in an ambulance. The EMS sector’s reliance on narrowband voice communications for four decades underscores its sequential process mentality. (See timeline.)

With voice communications and the very limited data supported by narrowband, EMTs and paramedics essentially get one set of simple information when they key the microphone. This might be a dispatch, a location update, the status of other responding units, a patient update from a non-medical responder who has arrived on scene, or the availability of a HEMS unit or hospital emergency department. So, a whole call proceeds on the basis of information received one microphone click, one action or one observation at a time.

Wireless broadband communications will change the paradigm for both urban and rural EMS. In the high-volume arena of city EMS response, the emphasis will be on situational awareness and using that knowledge to efficiently and effectively meet the patient’s needs in a rapidly changing environment and contingent upon resource availability. Responders will have visual, GIS-based depictions of the environmental and resource status of their jurisdiction or response area. The status of their vehicle, equipment and supplies also will be monitored. All information not readily apparent on the screen can be drilled down to with the click of an icon.

Creating a common operating picture among the players needed on a call — first responders at the scene, back-up or specialty response and hospital personnel — will be a parallel process, aided by technology, that takes one to two minutes, compared with the typical five- to 10-minute sequential process, to accomplish the same assessment, diagnostics, data capture and documentation, and voice communications with the hospital and others. 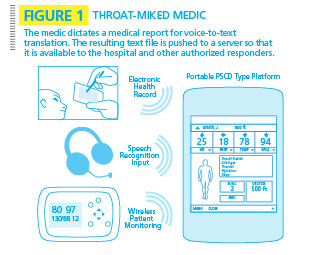 Figure 1 depicts a throat-miked medic dictating a medical report for voice-to-text translation as the patient is approached and engaged. The resulting text file becomes “patient database 1,” or “PDB1,” and is pushed to a server so that it is available to the hospital and other authorized responders. Simultaneously, a hat-cam records patient and/or scene video into PDB2, a multi-vital signs monitor the size of a card deck transmits into PDB3, and the patient’s relevant medical history is downloaded from a flash drive (or from a regional medical records repository) into the medic’s communications device and into PDB 4. All others needing to know patient status can access the PDBs on the server. Eliminated is the every-call mandate to coordinate voice interaction among all responders and the hospital in busy city street and emergency department environments. At the end of the call, the medic simply updates the data in the PDBs (rather than writing a new patient/run record) and quickly is available for the next call. 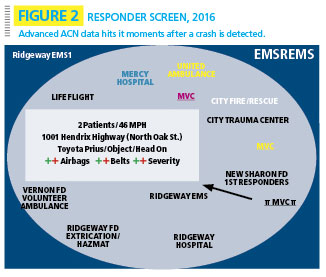 In the “paramedic paradox” world of rural EMS, parallel processing has a profound impact on the Golden Hour, as the 2011/2016 car-crash scenarios depict. Figure 2 imagines the EMS responder’s communications device screen in the 2016 scenario, when advanced automatic crash notification data hits it moments after a crash is detected. 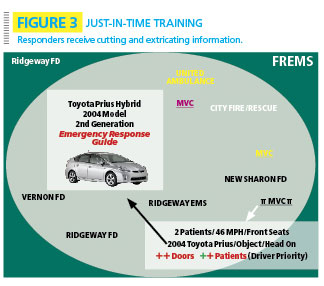 Figure 3 depicts “just in time training” guidance on cutting and extricating patients from the vehicle to which the rescue crew is responding. 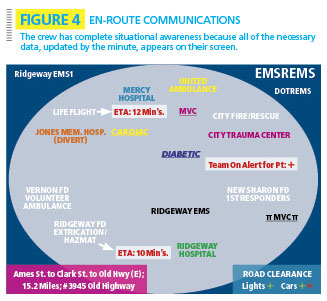 Figure 4 depicts the ambulance’s communications screen en route to the scene: without a word uttered, the crew has complete situational awareness because all of the necessary data, updated by the minute, appears on their screen. As a result, the patient is assured to receive the treatment he needs within the Golden Hour.

Finally, in the “paramedic paradox environment,” EMTs — not paramedics — often may be the highest level of professional available during the 30 to 90 minutes (or longer) it takes to transport the patient to the distant hospital. Ultrasound and other imaging technologies, as well as the ability to process laboratory tests in the field may soon be available to EMTs, who will be able to use such tools to detect internal bleeding, or to determine the type of stroke that may be occurring or whether a heart attack is progressing. This in turn will aid the decision between a helicopter ride to a specialty center and a slower, less expensive ride to the hospital closer to home. But this technology also needs a virtual doctor to enter the ambulance with that rural EMT and guide the procedure and interpret the results.

None of this will happen, however, without wireless broadband communications.