Motorola is not the first company to have such a brainstorm, but it might be the one best-positioned to pull it off. It has the formidable managed-services experience and it has deep pockets.

It’s always good to get out of the office, though it’s never easy. In fact, it’s far easier to fall back on the “I’m just too busy” excuse, because time always is in short supply. But getting out of the office, even for a day, is cathartic. It also can be very educational—which is why we make the time to do so.

A case in point occurred yesterday, when Senior Writer Donny Jackson and I attended Motorola Solutions’ annual media day. (See Jackson’s story on Motorola CEO Greg Brown’s remarks.) The big announcement of the day was that Motorola is planning a major expansion of its managed-services business. For instance, in addition to the network-security and performance-monitoring services that it already provides, the company will move more aggressively into data analytics.

A major driver for that is the proliferation of video that is being generated today by municipal and enterprise security systems, a phenomenon that only will accelerate as 4G Long-Term Evolution (LTE) networks come on line, said Bruce Brda, a senior vice president for the company.

“Large municipalities have hundreds, even thousands of video cameras, but there aren’t enough eyeballs in the world to watch and monitor all that video,” Brda said.

Motorola Solutions also will attempt to increase its market for network-design services. This is where I was educated a bit yesterday. The company currently designs about a thousand wireless systems each year, monitors another 600 or so and employs about 6,000 service workers worldwide. Much of the work is done at network operations centers at its Schaumburg, Ill., headquarters and in Berlin and Malaysia. The one in Berlin is similar in size and scope to the center in Schaumburg, while the center in Malaysia is somewhat smaller.

“Managed services are the biggest growth area for us,” Brda said. “Customers just don’t have the resources anymore.”

Motorola is smart enough to stay within its core competencies of public safety, retailing and transportation for the effort to expand its services offering.

“We have deep knowledge in each of these areas, and that makes us unique,” Brda said. 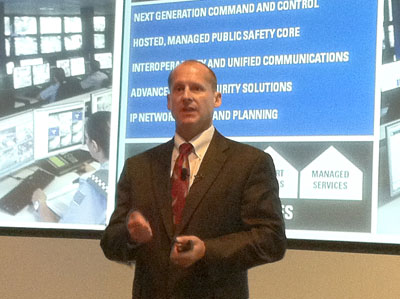 I really wasn’t aware of the scope of Motorola’s work in managed services. Naturally, when one thinks of the company, one thinks of mission-critical voice and data systems and gear. Why not? The company long has been an innovator in this area. It introduced the first police radio (in 1933), the first wireless data system (in 1970) and the first trunked system (in 1978). It even had a hand in the first voice transmission from the moon (1969) and employed the team — led by the iconic Marty Cooper — that developed the cellular telephone.

Likely, I’m not alone in my ignorance of Motorola’s acumen in managed services.

“Our services capability has been one of the best-kept secrets,” said Mark Perkins, the company’s director of centralized services. “Today’s announcement is about changing that.”

Motorola also hopes to increase its provisioning of hosted network services and believes a need for such services only will increase in the future. This belief is driven by the understanding that, as networks continue to evolve and migrate toward 4G technologies such as LTE. However, many public-safety, government and enterprise entities lack the skills to manage the migration and, more importantly, to operate and maintain those networks once they are installed. Also, given the still-sluggish economy, many of these entities will lack the financial wherewithal to migrate in the first place. Leveraging a hosted solution provided by Motorola would enable them to take advantage of next-generation capabilities that otherwise would be beyond their reach.

“The timing is perfect for this,” Brda said, adding that such an initiative is “in our wheelhouse,” because it is a logical extension of the managed services the company already is providing.

I couldn’t agree more. Motorola is not the first company to have such a brainstorm, but it might be in the best position to pull it off. It has the formidable managed-services experience mentioned above, and it has deep pockets. Brown said that the company would be adding about 400 headcounts and increasing its reliance on third-party vendors that have expertise it lacks to support the expansion of its services business. He also wouldn’t rule out a strategic acquisition if that’s what it takes.

I hope Motorola succeeds in this effort, particularly as it relates to network hosting. One of the fears I’ve had about the 4G projections is that there will be some entities that will be left on the outside looking in, because they lack the necessary wherewithal. Leveraging a next-generation network hosted by people who know what they’re doing could well be the key that unlocks the door.