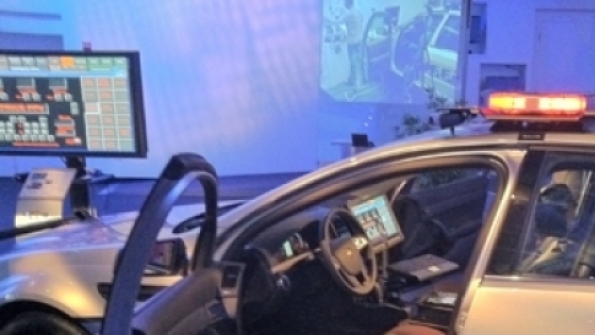 It features a push-to-talk button that's integrated into the steering wheel and eight video cameras that are strategically positioned. In the trunk is a mobile radio, a mobile workstation and a digital video recording system that is connected to all eight cameras and which is always on.

Motorola Solutions unveiled this week at its annual media day a concept law-enforcement patrol car that it developed in conjunction with General Motors. It will be available sometime next year.

The vehicle is Chevy Caprice model built for law enforcement. It features a push-to-talk button that's integrated into the steering wheel and eight video cameras that are strategically positioned. In the trunk is a mobile radio, a mobile workstation and a digital video recording system that is connected to all eight cameras and which is always on. "An officer can hit a button and get a quick 10-second replay in case they aren't sure what they just saw," said Shamik Mukherjee, senior director of solutions marketing Motorola Solutions.

Also in the trunk is a public-safety broadband LTE modem that offers lightning fast data transmission speeds. "That allows video to be shared with fellow officers and dispatch — or received by the officer — in real-time," Mukherjee said.

Inside the vehicle are a rugged laptop and a control head that integrates the key components that an officer would need at his fingertips so that they're easily and intuitively accessible. Those components all are voice-activated for ease of use in high-stress situations.

"In the past what you would have is a situation where you would have a number of different control panels," Mukherjee said. "You would have controls for the lights, siren, the PA, the gun lock, and a couple of radios. There was no interaction across any of those components."

Mukherjee said that he often has been asked why Motorola opted for control knobs over a touch screen for the control head, which some perceive to be easier to use. The answer is that the company's extensive research — which involved more than 250 ride-alongs and other field experiences — clearly indicated that hard controls were the better option.

"The key was observing officers in high-stress scenarios," Mukherjee said. "In a high-stress situation, it's not about what people think they do, it's about what they actually do. We found, for example, that in a high-speed chase, hard controls are better. You want to be able to swat those controls or turn them all the way across to get the lights and sirens going."

Motorola's goal was to work with GM to develop a law enforcement vehicle that would "have the officer's back," Mukherjee said.

"There is no such thing as routine in law enforcement. A traffic stop could turn into a high speed chase. In such a high-stress circumstance, vision narrows and hearing is compromised. … It was critical when designing this system and its interfaces that we empowered the officer," he said.