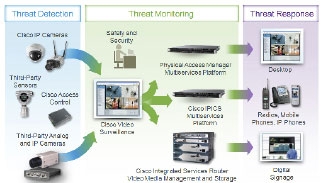 Don’t bet against the house

A look inside the (not-so) flashy world of casino video surveillance, where cameras methodically capture everyone's every move.

Las Vegas–based movies and TV series long have painted a shiny, sexy, high-tech picture of casino video surveillance, with all-seeing cameras keeping track of everything going on in the “house.” The reality is much more mundane, with technology only starting to catch up to Hollywood’s ideal.

“It is a lot more boring than you think it would be [from the movies],” said David Schwartz, Ph.D., director of the Center for Gaming Research at the University of Nevada–Las Vegas (UNLV). “Imagine watching TV without any sound for eight hours a day. … There’s a lot of tedium involved.”

Schwartz has real-world experience in the field, having worked in the surveillance department of a casino in Atlantic City, N.J., before coming to UNLV.

“One of the worst two nights of my life was when I was working surveillance,” Schwartz said. A casino teller had come up short for the evening and it was his job to review the recorded video footage to spot where the loss had occurred. “I’m watching in slow motion every chip, every transaction, looking for the shortage. I never found it. Watching someone sorting money, changing money, in slow motion is not very fun.”

While vendors and casino officials wouldn’t get into specific numbers at properties, a mega casino found on the Las Vegas Strip can have anywhere from 3,000 to 5,000 cameras distributed all around the property, with some cameras picking up people on the street three to four blocks away. Individual cars entering in the parking garage or pulling into the valet area are identified through the use of license place recognition software.
Inside, cameras monitor entrances, hallways and anywhere money changes hands, including bars, restaurants and gift shops. But most lenses are pointed at the casino floor, directed at the table games and at every two or three slot machines. They are powerful enough to “read serial numbers on bills,” Schwartz said.

Earlier generations of casino surveillance systems were built using analog video cameras, coaxial cable, matrix switchers, VCRs, and lots and lots of video tapes. Back in those days, simply rotating video tapes every eight hours was “an aerobic workout,” said Tom Flynn, the vice president of security and surveillance for Caesar’s Palace and the Rio. According to Flynn, the ability to track someone walking through the casino became “almost logistically impossible” due to the number of videotapes involved, spread across dozens of cameras.

Today’s digital-based video systems with hard-drive storage greatly have simplified the process of monitoring casino patrons and workers, largely because they have greatly improved speed and efficiency. “What took hours can be done in minutes,” Flynn said. “As a result, we’re more effective. Before, when there was an incident on a table game, it would be, ‘call us up, we’ll call you back.’

“Now, results can be given almost instantly with digital. We are able to spot a person dropping a slot machine ticket, see who picked it up and follow it on replay. If we get it done quickly enough, we can find [the person] in the building and have security go and get the money back for the victim.”

Video cameras are monitored and serviced on a 24/7 basis, with specific regulations from the state gaming commission dictating the positioning of cameras, clarity of vide, and the amount of time video needs to be stored (at least 7 days) when monitoring gambling activities. This infrastructure is tended to by a dedicated staff of employees who watch the video screens for signs of trouble across the property, in addition to a technical staff that maintains everything.

“When you get this many cameras, it’s constant maintenance,” Flynn said, “If the [protective] dome has gotten dirty, you have to go clean it. Slots [machines] are always moving and tables are always changing positions. The techs have to move, change and focus cameras to have the right shots for [regulatory compliance].”

Casinos use their extensive video systems for three primary purposes, according to Schwartz.

“First of all, is to protect their property, which usually translates into money,” he said. “Everything from standard loss prevention to watching the cashier cages to making sure there’s no pilfering going on to watching the games to make sure no cheating is going on.

The second area concerns the enforcement of gaming regulations, something that no casino can take lightly — if it wants to stay in business. “They have to make sure that everything is running the way it should be running,” Schwartz said.

The third area concerns protecting the health and safety of employees and guests. “It could be a customer having a medical episode, it could be a fight starting,” Schwartz said. “You can let security know and get someone down there [faster].”

Vendors that supply video systems to gambling establishments say that the enforcement of gaming regulations tends to be at the top of the requirements list, while security tends to take a back seat.

“Surveillance [of gaming] is mandatory,” said Andrew Jackson, strategic accounts manager for Honeywell International. “Security is basically minimizing risk and liability, taking care of the safety of patrons and employees.”

Specific technical requirements are defined by the gaming authorities that oversee public casinos. While the casino’s surveillance department ends up making the buying decision, any resulting network has to be inspected and approved by the local regulatory authority.

“In surveillance, the requirements are laid out by the gaming commission. If you don’t have gaming [regulatory] approval, the casino doesn’t open,” Jackson said. “If there are any budget constraints, security gets cut.”

Because of their different functions — surveillance for gaming regulatory compliance and security for loss prevention and safety — many casinos are running two separate video monitoring centers.

Since the cameras already are recording every point-of-sale terminal and transaction for loss prevention purposes, the video is synced with the electronic transaction record at the terminal. Managers can review regular reports for irregularities, such as an excessive number of voids or casino “comps” (credits), and then use video playback to look for employees who rang up voids, undercharged, or simply pocketed money.

Only recently have casinos started to leverage their video assets to help their sales and marketing departments by watching where people go in the casino, especially after a large event such as a concert or big-production Vegas-style show.

“You can analyze crowd flow being utilized by properties these days,” Flynn said. “It can be looked at for safety, convenience and marketing — understanding what guests are interested in, what they aren’t. Do they go to a certain restaurant at times, go to the pit, [or to] the parking lot?” 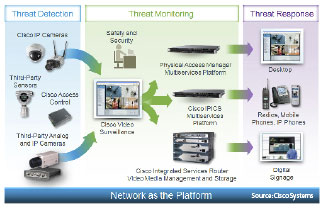 Both Honeywell and Cisco noted the failure of the Las Vegas casino industry to quickly embrace newer video applications and technology.

“We’re waiting for [casino] customers to catch up with the move to IP,” said Steve Collen, director of product marketing for Cisco’s physical-security business unit. “[Where] casinos are completely closed networks, our direction is to share data across wide-area networks, [so] there’s a bit of a mismatch there.

“Casinos tend to be very cost-constrained on budgets for surveillance — they don’t tend to view surveillance as a strategic asset or strategic investment like an IT implementation.”

Collen said that it was an “uphill struggle” to introduce products, such as video analytics, to identify unusual activities. He added that his company needed to provide incentives and a migration strategy to move casinos to next generation IP-based video systems that would enable more sophisticated applications.

“The Vegas casinos pay a tax on the total number of people who come in and out,” Collen said. “We looked at analytics as a way to do people counting. We delivered 99.5% accuracy using cameras over the door and presented a viable way to pay state tax based on occupancy. [But] it never got beyond proof of concept.”

Part of the issue with more rapid technology adoption has been the economic downturn, Jackson said. But he added that certain applications, such as facial recognition also are “not quite there yet,” as casinos have high expectations for “infallible” results. For instance, the typical camera placement within a casino cannot deliver the “square shots” necessary for the technology to perform to expectations.