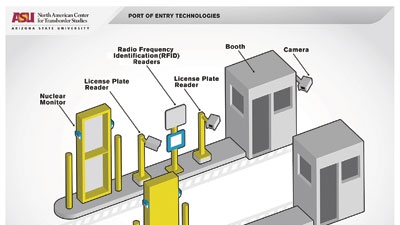 The area that is now the U.S.-Mexico border region has been recognized as a region of great economic opportunity ever since the Treaty of Guadalupe Hidalgo — which ended the Mexican-American war — was signed in 1848. Thus, the proper functioning of borders, including ports of entry, is enormously important. Despite conflicts along the border, cultural anxiety and changing domestic politics in both countries, recognition of the powerful economic forces of the border region persists and outlasts politicians and policy.

Today the United States and Mexico face several border security challenges. Reports from the border region are a constant in TV news, on the Internet and in newspapers. Each day, illicit materials and undocumented immigrants are smuggled across the countries’ shared border. These illegal materials include drugs, precursor chemicals, firearms and bulk cash. The presidents of both countries have vowed to create a border for the 21st century that is secure, yet efficient to facilitate the cross-border flow of legal goods, services and people.

In recent years, the U.S. has focused its security investments on traditional infrastructure and impediments, such as walls, fences and car barriers. With the cancellation of the U.S. Department of Homeland Security’s SBInet (Secure Border Initiative) program — an enormous, multimillion dollar undertaking that would have utilized a variety of tower-based surveillance systems, as well as airborne and ground-based sensors, to defend 6,000 miles of border — it is clear that programs like these have limited effectiveness. Developing a truly secure 21st century border requires the application of a more adaptive set of technologies. 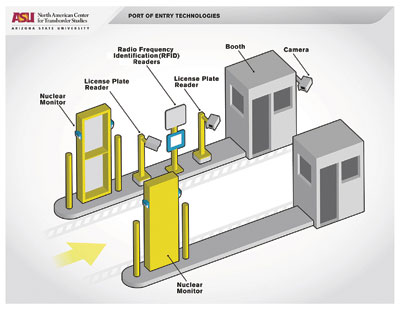 Last year, the North American Center for Transborder Studies (NACTS) was commissioned by Motorola Solutions to examine the ways that technology can enhance and augment security along U.S. borders, with an emphasis on the 1,969-mile U.S.-Mexico border. The purpose of the study was to investigate whether applying new technologies to border security operations could achieve the desired goals of reducing staff required in the field, improving agent safety and increasing operational efficiencies.

NACTS conducted the research and shaped the border security operations definition; it also provided analysis of the study’s findings. The process included a review of relevant literature on border security, a series of events and meetings — including 41 interviews and multiple border tours with the U.S. Border Patrol.

This keystone should be added to stabilize and connect the entire operational structure. If communications technologies are implemented effectively, they can be used to link the three components identified above in crucial ways, and in process accomplish the following:

It’s important to consider the times in which we are living and how the study’s findings fit into that context. The study results come at a very opportune time, for the president and Congress currently are sharpening their pencils and looking for every opportunity to reduce funding for critical programs. (Download the full study here.)

In fact, over the years, the U.S. Department of Homeland Security and the U.S. Customs and Border Patrol have invested significantly in increased agents at the border and in supporting infrastructure, as well as in proven and experimental technologies. However, the study concludes that both departments did not invest proportionally in communications technology and other command, control, communications, computers, intelligence, and reconnaissance (C4ISR) technologies to enhance the three primary components of border security — technology, infrastructure and staff — and to enable each of them to work more effectively within a cohesive operation.

Here’s what our policymakers should know:

Through its research and analysis, the NACTS found that by leveraging emerging technologies with existing infrastructure and personnel, border security and trade can be enhanced in a cost-effective manner that is beneficial to citizens of both countries. This interconnectivity of vital communications technologies — i.e., a system of systems — between ports, check points and law enforcement agencies along the border is the key to improved flow of people, goods and services between the two countries.

As we look into the future of U.S.-Mexico border security and commerce, it should be noted that the failure in applying technologies to border security operations lies more in the approach and focus of policymakers than in the technologies themselves. In fact, unrealistic expectations, local supply source issues and lack of consultation with field operators — and other on-the-ground personnel — has contributed to the majority of challenges that exist today.

In addition, the geographic diversity of the border area must be understood — no one border security technology works well everywhere. For example, radar, cameras, night vision, license plate readers and some radios work well in flat, open terrain. Likewise, unattended ground sensors help in valleys, areas of heavy vegetation and other dense locations.

Also, safety is enhanced when Mexico’s priorities are considered. Mexico’s state public-safety departments, Seguridad Publica, have preventive priorities and standards in place that add key perspective to the overall security challenge. The U.S. and Mexico’s bi-national definition of 21st century border management calls for upgraded communications equipment. One of the recent shifts of the Merida initiative — a multinational effort led by the U.S. and Mexico to combat drug trafficking, money laundering and other types of organized crime — is a re-emphasis on the co-responsibility that both countries share in improving communications along the border.

Lastly, technology can be a force multiplier and can replace expensive infrastructure, with communications enhancements presenting cost savings by transitioning field staff to COP centers.

If the federal government invests proportionally in integrating communications along the border, relative to other border security investments, it can expect to see a vast improvement in security and trade in the region. This is an imperative for the citizens of both countries, especially those who live and work in the region; for American taxpayers, who expect efficiency and smart spending; and for business people who will stand to benefit generously.

Rick Van Schoik is the director of the North American Center for Transborder Studies at Arizona State University. NACTS is a key part of ASU’s vision of the research university as an interdisciplinary, highly applied institution focused on making a positive impact upon society and its institutions.