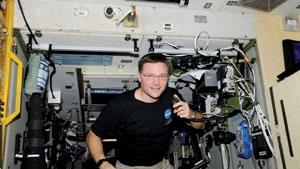 Amateur radio operators are much more than hobbyists; they provide extremely important communications, especially during and after emergencies.

The term amateur or “ham” radio operator is likely to conjure up images of a retired neighbor with a giant beam antenna making nighttime contact via HF radio with like-minded individuals hundreds of miles away. (I prefer to think of hams as persons with an unnatural but healthy interest in radio.) But amateurs do much more — you find them operating land mobile radio repeaters, wireless Internet connections and video links. Hams even have their own satellites called OSCARs (orbiting satellite carrying amateur radio). Amateur radio operators also volunteer their time and equipment for emergency communications and they had an important role in communications restoration following Hurricane Katrina in 2005.

Origins of amateur radio. Amateur radio has been around almost since Marconi, and the first amateur licenses were granted in 1912. Early stations were “spark” stations and used Morse code for communications. Spark soon was replaced by vacuum tube transmitters and by the 1920s, amateurs were transmitting both voice and Morse code. The Amateur Radio Service was included in the Communications Act of 1934, which also created the FCC. The service has greatly expanded in size and capability since then and has thrived, despite controlling spectrum highly sought after by government and industry.

Hams are often on the cutting edge of radio technology. The first amateur satellite, OSCAR-1, was launched in 1961 when satellite communications was in its infancy. Hams also invented a new type of image transmission called slow scan television that can operate on narrow VHF and UHF channels. Probably the greatest contribution of amateur radio to society is the advancement of radio technology by thousands of enthusiasts who spend their personal time experimenting and sharing information. Today, there are more than 700,000 amateur licenses in the U.S. and roughly 2 million worldwide.

Why “ham”? The term “ham” was originally an unfair pejorative referring to the ineptness of amateurs, but by the 1920s amateurs had adopted the term to describe themselves and the name stuck. The stories that ham is short for ham-fisted (clumsy) or that HAM=Hertz-Armstrong-Marconi are simply myths. 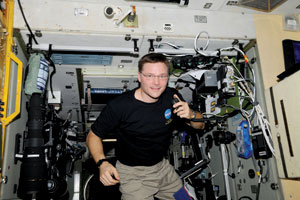 What do hams do? Amateur operators participate in a multitude of activities. Probably the most popular is voice communications over long distances. The HF bands  (3–30 MHz) allow hams to communicate over hundreds or even thousands of miles using ionospheric scatter. Networks of VHF or UHF repeaters enable statewide or region-wide communications using FM voice. Hams are also active with digital messaging and Internet communications.

Many amateurs participate in local radio clubs and many clubs operate repeater stations for their members and other hams. There are 20 orbiting OSCAR satellites with transponders in most amateur bands from 21 MHz to  47 GHz. Even the International Space Station has an amateur station. In the photo at the right,  Col. Doug Wheelock, KF5BOC, is operating the NA1SS amateur radio station in low-earth orbit (an altitude that ranges from 173 to 286 miles above terra firma). The uplink frequency of this station is 144.49 MHz and the downlink frequency is 145.80 MHz.

Licensing. Amateur radio operators are regulated by the FCC and only those individuals with an FCC license are allowed to transmit in the amateur radio bands. To acquire an amateur license, individuals must pass a test demonstrating their knowledge of radio electronics, antennas, radio propagation, RF safety and FCC rules. Today, there are three classes of licenses: Technician, General and Amateur Extra. Advanced and Novice licenses no longer are issued, but are grandfathered. Most of the HF radio bands are restricted to the more advanced General and Amateur Extra licensees. Like all FCC licensees, amateurs are assigned unique call signs, usually four to six characters long starting with a “K” or “W” in the U.S. Importantly, amateurs are forbidden from receiving compensation for their activities. They are “amateurs” in the true sense of the word.

Frequency bands. Starting in the 1920s, government agencies worldwide assigned the least desirable frequency bands to amateurs, who were considered nothing more than hobbyists. But the hobbyists were actually pioneers and in many cases, hams demonstrated valuable services in these supposedly worthless bands. Today, amateurs operate in various bands from 1.8 MHz to above 300 GHz, including the popular North and South American bands listed in Table 1. Note that some amateur bands are shared with other services, including the 2.4 GHz license-free band dominated by Wi-Fi devices. 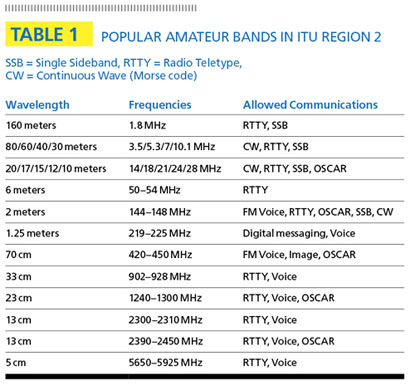 MARS. Formed in 1948, the Military Auxiliary Radio System is a DOD-sponsored civilian auxiliary (similar to the Civil Air Patrol) whose members primarily are licensed amateur radio operators. In the early days, MARS operators transmitted morale and welfare messages for military members who had no other means of communication with loved ones (other than telegrams). Today, MARS still sends morale and welfare messages, but it also provides interoperability communications for National Guard units and it has an important role in disaster communications.

Emergency communications. Hams are among the unsung heroes of hurricanes, earthquakes, fires and floods. In the aftermath of Hurricane Katrina, many cell sites were flooded or lost prime power, and landlines, where available, often were overloaded. Even the 911 system was unable to handle the unusual number of urgent calls. Amateur operators were involved in many rescues, providing the only communications link to rescuers.

In one case, floodwaters in New Orleans stranded 15 people on the roof of a house. Unable to get through on the overloaded 911 system, one of the stranded called a relative in Baton Rouge who called another relative who called the American Red Cross. The local Red Cross chapter operates its own amateur radio station and Ben Joplin, WB5VST, was able to relay a request through two other amateur stations in Oregon and Utah back to Louisiana (presumably via HF ionospheric scatter). Local emergency personnel were alerted and all 15 people were rescued.