Radio takes a licking but keeps on ticking

Here’s a well-deserved tip of the hat to all those who ensure that the communications devices used by first responders in the field are able to “take a licking and keep on ticking.”

On Sunday, the Association of Public Safety Communications Officials conference begins in Philadelphia. I always look forward to events such as these, as there always is something interesting to report. Indeed, we’re already gathering information for the daily editions of our UC Today e-newsletter that we’ll produce next week — the only place where you’ll find daily APCO coverage. I hope you’ll check out each edition.

First and foremost, we will have technology in our sights as we move about the convention center — we always want to know what new gadget, application or system is being launched that will make first responders more effective or keep them safer. When we think of technology, we tend to think first of what’s new and cutting-edge. But technology is useless if it also isn’t rugged enough to stand up to the rigors of the environments in which it is being used.

Here’s what I mean. A couple of weeks ago, Senior Writer Donny Jackson and I were at Motorola’s suburban Chicago headquarters for the company’s annual media day. We’ve already reported on some of what we discovered — the coolest thing I saw was the concept patrol car that the company is developing with GM — but we were told another story that we haven’t shared, one that I found fascinating.

Back in January, a three-alarm fire broke out in Charlotte, N.C. During the suppression, a nail popped out of the wall and impaled a Motorola radio that a firefighter had placed in the chest pocket of his turnout coat. He didn’t know that this had occurred until he took the radio out of the coat after the fire had been suppressed. The radio protected the firefighter from serious injury or even death — if the radio hadn’t been in that chest pocket, it is likely it would have punctured the firefighter, perhaps even his heart. Even more interesting is that the radio kept working, even after the impaling. 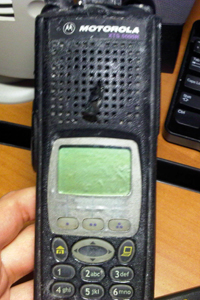 I posted this item to Fire Chief’s Facebook page — I also am the editor of that publication — and received some interesting comments. One wrote that a Motorola radio had fallen out of a car trunk and subsequently had been run over — and chewed up and spit out — by a snow blower. After the battery was replaced, the radio worked as well as ever. Another wrote that on the way to a fire, a Motorola radio fell off an engine and was run over by a following tanker. It received a few scratches, but otherwise worked fine. Yet another wrote about a Vertex radio that was dropped 40 feet from a radio tower onto concrete. The antenna needed to be straightened and the battery needed to be replaced, but it worked fine. 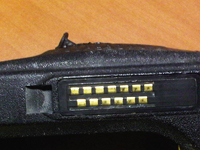 All of this made me think of the old television commercials for Timex watches, which used the tagline, “it takes a licking but keeps on ticking.” In one of my favorites, they attached a Timex to an arrowhead. An archer shot the arrow through a pane of glass, where it subsequently landed in a basin of some sort filled with water. The watch kept ticking — testimony to both the watch’s durability and waterproofness, which was a relatively new concept at the time — which spokesman John Cameron Swayze made sure to demonstrate by having the cameraman zoom in on the sweep second hand.

Things built to last are a good thing — a very good thing. Sometimes, the disposable society in which we live loses sight of that in the zealous pursuit of the latest and greatest. With that in mind, here’s a well-deserved tip of the hat to all those who ensure that the communications devices used by first responders in the field are able to “take a licking and keep on ticking.”