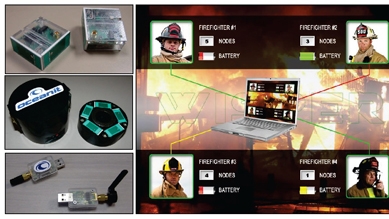 The Department of Homeland Security’s Science & Technology Directorate announced that a firefighter location-tracking technology has graduated from research and development and is ready for market after nearly a decade of extensive testing by engineers and fire departments.

The Department of Homeland Security’s Science & Technology Directorate announced that a firefighter location-tracking technology has graduated from research and development and is ready for market after nearly a decade of extensive testing by engineers and fire departments. The multi-layered technology was unveiled this week at the Precision Indoor Personnel Location and Tracking International Technology Workshop at the Worcester (Mass.) Polytechnic Institute and is expected to reach market next year.

“Technologies have been developed that combine sensor technologies and medical sciences as a way of monitoring what is happening to that person, specifically their location, their heart rate and their temperature,” said Jalal Mapar, S&T program manager.

Tracking firefighters became a priority after the 1999 Worcester Cold Storage Warehouse fire, in which six firefighters were killed after becoming lost. The idea re-energized after the Sept. 11th terrorist attacks, and leadership tasked scientists to develop and test technologies that could track firefighters in buildings where GPS was unavailable, Mapar said.

“There have been all kinds of incidents, small, medium and large — directly and indirectly — where firefighters have lost their lives because they went into a warehouse and commanders had no awareness of their location,” he added.

In fact, it was the first-responder community who identified the ability to track and monitor personnel as a crucial capability needed to prevent loss of life. S&T technologists started to work on the complex problem, Mapar said. The result was the development of three programs: GLANSER, PHASER and WISPER. 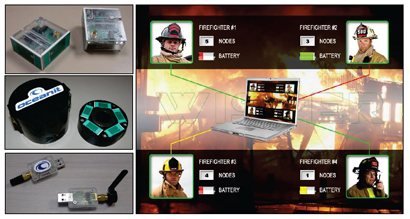 Geospatial Location Accountability and Navigation System for Emergency Responders (GLANSER) is carried on the firefighter and consists of a microwave radio, a lightweight battery and a suite of navigation devices embedded into a tracking device “the size of a paperback book,” Mapar said. GLANSER’s two-way signals are transmitted on the 900 MHz frequency by a small, USB-powered base station in a laptop in the fire truck where commanders also can monitor firefighters.

Physiological Health Assessment System for Emergency Responders (PHASER) is the second component of the system, Mapar said. PHASER can monitor a firefighter’s body temperature, blood pressure and pulse. If a firefighter is in trouble, an alarm sounds on the laptop and a firefighters’ location can be found via GLANSER.

When a firefighter enters a burning building, he or she is armed with five such routers loaded in a belt-mounted waterproof canister. When they step beyond radio range, the base station orders the canister to drop a router. As they are dropped, they automatically arrange themselves into a network. If a router accidentally gets disabled, the network will reconfigure, Mapar said.

Honeywell will lead the team of companies that will commercialize and sell the system as a product next year, Mapar said.

“Our rule in the government is to encourage private industry to solve the problem by accelerating the development of technologies,” he added. “We are very proud of that.”