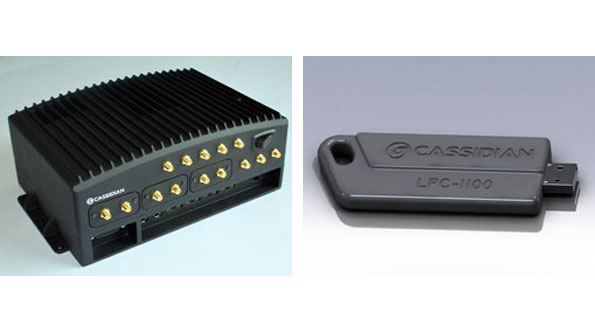 Cassidian Communications is demonstrating the ability to deliver one-to-many and one-to-one push-to-talk communications using smartphones or tablet computers over an LTE network during the APCO conference in Philadelphia.

Cassidian Communications is demonstrating the ability to deliver one-to-many and one-to-one push-to-talk communications using smartphones or tablet computers over an LTE network during the Association of Public Safety Communications Officials conference in Philadelphia this week.

“We don’t know whether we’re the first, but we believe this is pretty revolutionary,” said Tami Timperio, the company’s vice president of marketing.

In addition, the company unveiled prototypes of an LTE in-vehicle router and a dongle modem, both of which are expected to be available by the end of the year.

Cassidian, working with Alcatel-Lucent, also is demonstrating multi-entity and multimedia collaboration — i.e., unified communications — over an LTE network. A freight train with chemical tanker cars that derailed in a heavily populated area would be one of many examples where such collaboration would be valuable, as such an event would require response from police, fire, EMS, hazmat, transportation and public works.

Specifically, Cassidian is demonstrating how personnel from such myriad entities could engage in voice, data and video communications with each other — and, potentially, with subject-matter experts from around the world — over an LTE network using Alcatel-Lucent’s My Teamwork smart-device application, which originally was developed for the enterprise sector. For example, incident commanders could leverage the app to receive detailed manifests from the freight company regarding what the tanker cars contained and then consult — via video or voice conference — with hazmat experts or the manufacturers of the chemicals to determine the best method of mitigating the incident.

In addition, the app lets land-mobile radios connect to any IP-based telephony device. Such a capability would enable an incident commander using a Project 25 digital radio to participate from the emergency scene in a voice conference with experts on the other side of the state, country or planet, which would save valuable time and result in clearer communications, said Michael Doerk, a Cassidian marketing manager.

“If you attempted to do that at 3G speeds, it would be rather choppy and probably not a great experience for the end users,” she said.

Finally, Cassidian announced that it has received contracts from the cities of Billings, Mont., and Richardson, Texas, and Sedgwick County, Kan., to deploy its CORP25 digital trunked Project 25 system. The company also will upgrade Billings’ legacy VESTA 911 call-processing solution to the Sentinel Patriot NG-911 platform.

One of the key selling points that convinced these customers to choose CORP25 for their migrations was that it is a non-proprietary, open-architecture solution, which lets them shop around for subscriber units. In Richardson, more than 30 radios were tested on the system before units were selected for final purchase, Timperio said.

“Every one of them worked great, but they had their own strengths and weaknesses,” Timperio said.

“The freedom to select from the widest possible range of choices [gave us] the best possible mix of elements for our public-safety and government users … for the right money — and that’s just a huge win for us,” Graves said in a statement.

According to Timperio, this is exactly how the P25 standard is supposed to work — a particularly important point, given the challenging economic environment in which many agencies currently operate.

"This is the ‘true choice’ message that we’ve been saying, which goes back to the proof point that the open P25 standard drives down total cost of ownership — in some cases, fairly substantively,” she said.