The XG-75 and the P5500 multimode radios are P25 Phase 2–capable via a software upgrade, while the MBC-100 mobile subscriber device will operate on public-safety LTE networks in the 700 MHz band.

Harris introduced two land-mobile radios and a new mobile subscriber device that will operate on 700 MHz LTE networks during this week’s Association of Public-Safety Communications Officials (APCO) conference in Philadelphia.

Both portable radios — the XG-75 and the P5500 — are single-band, multimode radios that are Project 25 Phase 2–capable via a software upgrade and are designed for public-safety users, according to Kim Purdie, manager of terminal products for Harris. In fact, the P25 Phase 2 capability is the primary difference between the P5500 and another Harris radio, she said.

“It essentially is the P5400 radio, with Phase 2 capability added,” Purdie said during an interview. “For customers looking for a very economical radio … this radio will serve the low tier, and you can add optional features to make it a mid-tier product.

“Before this radio, there was no option for the low-tier radio. You had to buy a very high tier [radio], and that was it. But now, Harris has a full portfolio of Phase 2-upgradable radios.”

Another part of that portfolio is the XG-75, a mid-tier radio that features the noise-cancelling technology and rugged design used in the Harris multiband Unity radio, Purdie said. While the XG-75 is a single-band radio, it is capable of operating in multiple modes — analog, P25, EDACS and OpenSky, she said.

“So, for the customers who are migrating [between technologies], it’s a great radio,” Purdie said. 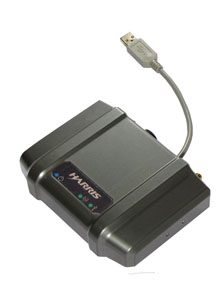 In addition, Harris demonstrated a functional prototype of its MBC-100 mobile subscriber device (see image) that will operate on public-safety LTE networks in the 700 MHz band.

“Basically, you can think of it as air-card functionality in a hardened box,” Paul May, senior product manager for LTE solutions at Harris, said during an interview. “We’ve taken the core electronics and packaged them into public-safety-grade housing for mobile application, which means it’s ruggedized, weatherproof and designed for the temperature extremes and usage extremes we anticipate for public safety.”