If politicians really want to honor first responders and mark the 10th anniversary of the 9/11 terrorist attacks in a most meaningful way, they’ll roll up their sleeves and work to enact legislation that will make it all possible.

What were you doing on Sunday? It seems a safe bet that you were flipping channels all day, shuttling between the football games and the wall-to-wall coverage of the 10th anniversary of the Sept. 11, 2001, terrorist attacks that killed almost 3,000 Americans, including the 343 New York City firefighters.

It was a weird day. Last week, I shared some personal memories with our readers about 9/11. But on Sunday, I didn’t want to remember at all. Like most Americans, I have embraced the “Never Forget” mantra, and there is no chance that I will forget that day or what it meant to our country. But on Sunday, I felt strangely numb.

Nevertheless, I watched some of the coverage anyway, because it seemed like the right thing to do. There was much that struck me. At the very top of the list was all of the rhetoric about first responders being America’s heroes. They are, of course. But actions speak louder than words, and our politicians talk a better game than they play.

One of my colleagues, Stacey Orlick — director of our International Wireless Communications Expo (IWCE) — sent me the following editorial cartoon that appeared in her hometown newspaper, the Connecticut Post, on Sunday. The commentary was penned by Pulitzer Prize–winning political cartoonist Matt Davies, who I think perfectly captured the situation. In this case, the adage “a picture is worth a thousand words” couldn’t be more apt. 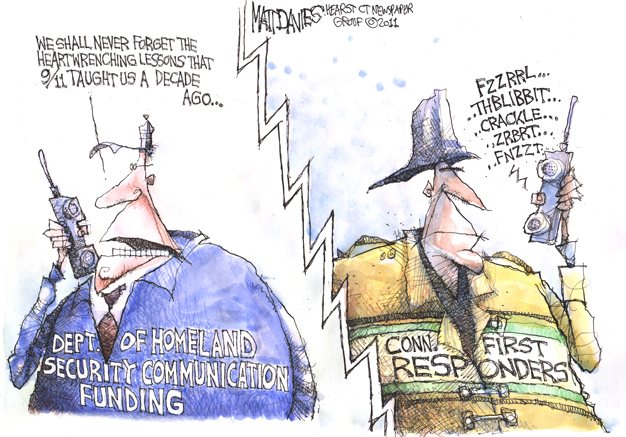 Right now, we have members of Congress mulling whether the 700 MHz D Block should be reallocated to public safety. They ponder whether the country can afford not to auction the spectrum. They wonder — given America’s insatiable appetite for broadband — whether the future needs of the nation’s wireless carriers can be met if these vital airwaves are given to the first-responder segment.

I wonder where their heads are at — or, more to the point, what’s in them.

Here’s the simple truth: I shouldn’t have a more sophisticated communications device than the firefighter who will carry me out of a burning building or the police officer who patrols my neighborhood so I can sleep soundly.

There was one other message from Sunday that struck a chord with me. It was a commercial for one of the big wireless carriers. In this commercial, an accident victim is consulting with a doctor in real time using a tablet device that the EMT has provided. It’s nice to think that’s possible. But it won’t be, unless public safety gets the D Block and the funding required to build the nationwide wireless broadband network that first responders not only richly deserve but sorely need.

If politicians really want to honor first responders and mark the 10th anniversary of the 9/11 terrorist attacks in a most meaningful way, they’ll roll up their sleeves and work to enact legislation that will make it all possible. As I wrote above, actions speak much more loudly than words.