The national tactical channels are available to most under a blanket license.

A question that we have been wondering about lately concerns why the FCC hasn’t come up with a blanket license that would allow all first responders to use the VTAC, UTAC, and 800TAC interoperability channels without having to first go through the process of licensing them for each agency.

In looking at the current licensing of these channels, there are numerous states that have licensed them for use by specific state agencies, but in other states all first responder units are covered under the state’s license. During the Association of Public Safety Communications Officials (APCO) conference in August, we asked FCC personnel about a blanket license that would apply from coast to coast. What we were told was quite a surprise. It turns out that all first responders can use these national interoperable TAC channels in mobile or portable units, without needing a license for their operation, except in localities that are north of Line A or east of Line C. Moreover, base stations do need to be licensed individually.

The following organizations are eligible to utilize these channels:

The intent of the FCC in creating these channels was to ensure that all public-safety agencies that respond to a major disaster or national emergency would be able to communicate with each other, regardless of jurisdiction or the radio system that each uses. Based on what we heard from the FCC, that intent has become reality and all agencies should take advantage of this resource. Specifically, these channels should be added to every mobile and portable radio used by the eligible first-responder organizations identified above, if it hasn’t already been done. 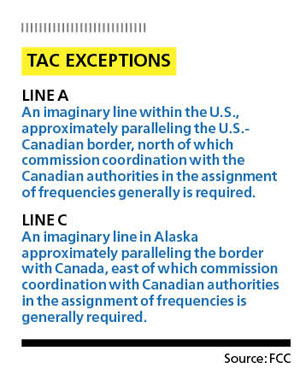 In addition, each agency should go through the FCC application process of adding these same channels as base station or repeater channels, if they want their dispatchers to also have access to them, as the blanket license only is applicable to mobile and portable radios.

Here is another thought. While it is desirable to have public-safety agencies easily operate with one another during emergencies, it also might be a good idea to have all first-responder communications administrators add one Family Radio Service (FRS) channel to their subscriber gear for communications with the readily available FRS radios. Current FCC rules prohibit such communications and would have to be changed to make them legal. Assuming that hurdle can be cleared, perhaps Channel 9 — which operates on 467.5875 MHz with a designated CTCSS tone — could be used for this purpose. Our suggestion would be to use tone 1 (67.0 Hz), hence FRS-9-1.

The selection of FRS Channel 9 is based in large measure upon the general public’s familiarity with — and the FCC rules for — the Citizens’ Band emergency Channel 9 that operates on 27.055 MHz. There are numerous advantages to FRS portable radios, including that they are very inexpensive and can be purchased at almost any large retail chain. Consequently, in times of disaster, they can be quickly acquired and inexpensively replaced if lost or stolen. They also operate on long-shelf-life disposable alkaline batteries, and because they already are programmed, they are rapidly deployable. Another benefit is that much of the general public already has them. Hence, they are ready for prime time.
FRS radios operate in FM narrowband simplex mode on UHF channels that are in between some of the dedicated General Mobile Radio Service (GMRS) channels. The first seven FRS channels are shared with GMRS, but they do not require a license provided that the transmit power remains under
0.5 W. An FCC-coordinated, FRS-designated emergency frequency would give first responders another path to communicate with the public at large and would allow for a rapid proliferation of inexpensive radios should a large-scale disaster occur.

Of course, the question will be raised concerning whether the public should communicate directly with first responders, even in times of emergency — particularly disasters that are regional or national in scope. It can be well-argued that, at least on a day-to-day basis, that’s why public-safety answering points exist.
But remember that CB emergency channel 9 has been in place for years, albeit forgotten and noisy, as CB communications occur in the AM high-frequency (11 meter) band. Consider also that in the aftermath of a large-scale disaster, traditional land-mobile-radio systems often are inoperable. Hence, the ability to communicate with the public, or that lone search-crew volunteer, via an inexpensive and readily available FRS radio could prove vital.

For the public-safety agencies that only use high-band VHF, the MURS Channel 1, Tone 1 (151.8200 MHz narrowband, CTCSS) also could be used for the same emergency purpose. In this case, MURS allows anybody to access these 2 W, multipurpose channels, which means that you also might be able to order your hamburgers from the local drive-through on the same frequency.

The need for interoperable communications always has been an issue for public-safety personnel and the FCC has seen to it that such personnel, in most cases, have access to channels that can be programmed into their radios for this purpose under a blanket license. But we also have seen many communities include FRS radios as part of their emergency-equipment cache. As a result, it would make sense for the FCC to set aside FRS Channel 9-1 as an emergency channel, just as it did 40 years ago for Channel 9 on the CB band. 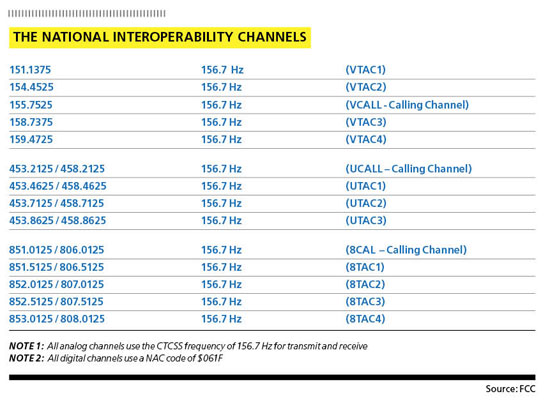 In 2000, the FCC did suggest to the public-safety community the availability of VHF, UHF, and 800 MHz interoperable channels; 9-11-2001 had not occurred; and the Department of Homeland Security did not exist. The focus of the article about interoperability is that the radio frequencies are available and almost all public safety agencies are eligible to use these frequencies and should have these channels in the radios that they are using. The naming of the channels has been refined over the years and the current nomenclature for these channels is defined in the National Interoperability Field Operations Guide (NIFOG) published by the US Department of Homeland Security Office of Emergency Communications. A great deal of time and effort has been put in by many dedicated people in the radio communications and public safety business, and these dedicated individuals and their sponsoring agencies should be applauded for their efforts, along with DHS OEC. The latest version is less than 1 year old, and the use of common names for all defined channels should be followed.

The current plan is that the channels should be named as follows:

The UHF and 800 MHz channels also have specific names that should be followed. The complete listing of the names that should be used for all radio channels is found on the DHS Office of Interoperable Communications Website and an easy to read version is found at the following URL: http://www.dhs.gov/xlibrary/assets/nifog-v1-4-rotated-for-viewing.pdf There are over 12 pages of named channels that have an accepted naming scheme that should be part of your radio channels setup. Urgent Communications strongly recommends that all agencies follow the suggestions of the naming in the NIFOG.

Ira Wiesenfeld, P.E., has been involved with commercial radio systems since 1966, and has experience with land-mobile-radio, paging and military communications systems. He holds an FCC general radiotelephone operator’s license and is the author of Wiring for Wireless Sites, as well as many articles in various magazines. Wiesenfeld can be reached at [email protected].

Christopher Dalton has designed, staged and implemented virtually every kind of LMR system in his nearly two-decade-long career, including conventional, trunked, simulcast, Project 25, single-site and multisite. He holds an FCC general radiotelephone operator’s license. Dalton can be reached at [email protected].