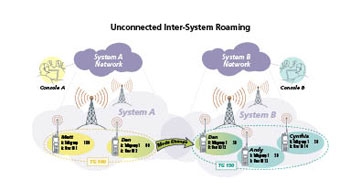 Much-anticipated ISSI solutions are in the marketplace and seem to be working as advertised, but the adoption rate is much slower than most public-safety communications officials expected.

For years, public-safety officials expressed enthusiasm about the much-anticipated approval of the Project 25 Inter RF Subsystem Interface (ISSI) and subsequent ISSI-based product introductions. While the P25 common-air interface was a significant step in the right direction toward interoperability and price competition, many proclaimed the ISSI’s ability to link standardized networks manufactured by disparate vendors as the key to unlocking the full promise of the standard.

After all, with ISSI gateway capability, first-responder agencies no longer would feel pressure to choose the same vendor as their neighbor, because they would be able to interoperate with each other across the standardized P25 platform. This scenario also meant that public-safety communications officials would have unprecedented choice in selecting manufacturers, resulting in the kind of leverage that theoretically would cause prices for network gear to drop.

But more than year after Motorola Solutions and Harris RF announced a successful trial that linked the Dallas/Fort Worth International Airport’s Harris-built P25 system to Motorola-built P25 systems — most notably, one owned by the city of Dallas — ISSI usage in the United States remains scarce. In fact, none of the sources interviewed for this article could cite another case where the ISSI is being used to link two networks from different manufacturers.

There are many potential reasons for the lackluster adoption rate, from the emergence of large regional land-mobile-radio networks to funding shortages to logistical issues, but the general consensus in the industry is that most expected the ISSI gateway technology to be playing a much bigger role in first-responder communications than it is. Among the disappointed is Cynthia Cole, an industry consultant who has been a staunch supporter of the P25 standard.

“I would have thought so,” Cole said when asked whether she expected ISSI usage to be greater than it is today. “It’s a little tough on the manufacturers — they spent a lot of money on the technology, and the market was demanding it quite loudly at one point. 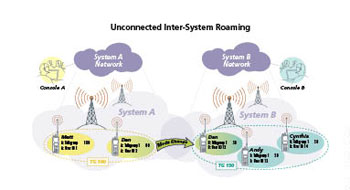 “As a community, I think public safety needs to deploy the interoperability standards–based technologies that are presented to them. You don’t want to undermine the motivation to continue building them and enhancing them.”

Trepidation often occurs when a new technology is being adopted, and it might be understandable if early ISSI deployments were deemed to be expensive, difficult to maintain or failed to perform as expected. But none of those issues have been encountered in the DFW Airport deployment, which is a “success story,” according to Cole, a former Motorola employee who is now the principal at Cynergyze Consulting, the firm that helps the airport manage its ISSI solution.

In fact, the airport’s ISSI has been active since January and boasts 35 local, state and federal agencies as users, with more than 3,000 radios supported by the P25 gateway solution, said Cole, who added that a typical ISSI deployment costs less than adding a single site to an LMR network. The network-management duties have proved to be “not very time consuming,” and the interoperability performance has been everything officials expected, she said.

“We haven’t really seen traffic ramp up, but so far, it’s been fabulous,” Cole said. 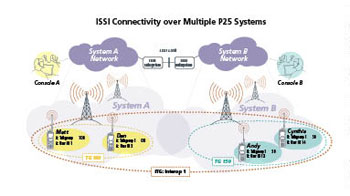 Paid for with money from a federal interoperability grant, the airport’s ISSI deployment is designed to ensure that officials at the transportation hub can communicate easily with first responders during times of emergency. Meanwhile, the interoperability partners also receive benefits by participating, Cole said.

“We’re getting a very positive response from the interoperability users on the ground,” she said. “They add six talk groups, and they get wide-area trunking across four counties. It’s a pretty good deal.”

With such a backdrop of technical and logistical success surrounding DFW Airport’s ISSI deployment, it would have been reasonable to expect that ISSI deployments would become a focal point of first-responder communications buildouts. But that has not been the case, in part because the landscape of public-safety systems is undergoing a drastic change.

When the notion of the ISSI was conceived as an element of the P25 standard, public-safety entities typically had their own LMR networks to support mission-critical voice — the police department and fire department in a given city often communicated on separate networks that operated in different spectrum bands. But the availability of 700 MHz narrowband spectrum and billions of dollars from federal grant programs that prioritized regional systems and interoperability initiatives have led to the deployment of large statewide and regional P25 networks.

With so many partners operating on the same network under such scenarios, the need for ISSI gateways to link disparate networks is greatly diminished, said John Muench, director of business development for Motorola Solutions. 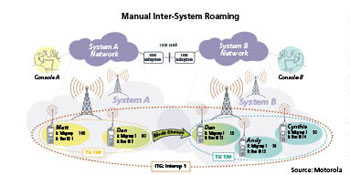 These regional systems eventually may be linked together by the ISSI to enable region-to-region interoperability, but there is not a great deal of urgency associated with creating such relationships, Muench said. For example, Motorola hosts an ISSI solution that links its systems in the states of Colorado and Wyoming, but the instances when interoperability has been needed along the states’ shared border so far have been “few and far between,” he said.

In addition, some potential ISSI customers are waiting on the sidelines until technical advances in second-generation ISSI products become commercially available, which is expected to happen next year, Muench said. With the second-generation Motorola ISSI solution, preconfigured users will be able to roam automatically from network to network, instead of having to make manual changes to the radio, he said.

“We have more than a half-dozen contracts for this [second-generation ISSI] functionality right now,” Muench said.

Others are just waiting on the need for P25 to present itself. The ISSI is designed to connect P25 systems, so its potential usefulness is limited until P25 is more widely deployed.
Such a scenario is occurring in Florida, according to Pam Montanari, radio and data systems manager for Pinellas County, Fla. Currently, Pinellas County and Polk County both use Motorola P25 systems, so they do not need an ISSI gateway to interoperate. However, they will be installing an ISSI next year, when neighboring Hillsborough County migrates from a Harris EDACS system to a P25 network, she said.

“Hillsborough County didn’t have a P25 system before, so it didn’t make sense to use ISSI until they did,” Montanari said.

As is often the case in the public-safety sector, money — or the lack of it — is a significant factor in the deployment of communications technology such as the ISSI. The fact that the interface does not enhance the performance of the system for primary network users means it is one of the first items that is considered to be cut when project funds become scarce, said Chuck Shaughnessy, vice president of LMR products for Harris.

“People are mostly concerned about funding their own jurisdiction’s communications system, and the funds are tighter today than they’ve been in awhile,” Shaughnessy said. “I think that talking to the neighbor just gets lower priority, so lower funding goes to it.

Shaughnessy noted that virtually every P25 request for proposal that Harris bids on includes a requirement that the network have ISSI functionality built into it. However, many of these public-safety agencies have opted not to pay the additional software-licensing fees and other expenses necessary to activate the ISSI capability, he said.

Meanwhile, another barrier to ISSI adoption is the fact that, while smaller vendors see the ISSI as the pathway to greater competition, the incumbent vendors within a geographic area do not have a financial incentive to deploy P25 interoperability gateways that enable greater customer choice, Shaughnessy said. Instead, they prefer to have customers in a sole-source situation, which leads to greater profit margins for the vendor, he added.

Another factor is that ISSI interoperability is not as comprehensive as the interoperability that occurs when two networks have the same vendor, something that often works to both Motorola’s and Harris’s advantage, Shaughnessy said.

“If we have a customer in County A, and County B right next door is coming on, we want to go in and say, ‘Hey, you’re going to get far better functionality talking to [County A] if you use our proprietary interface than if you resort to this least-common-denominator ISSI interface, which has some functional limitations,” Shaughnessy said.

The business strategies of vendors probably wouldn’t be a significant deterrent to ISSI adoption by themselves, Shaughnessy said. However, when an incumbent vendor’s interests are combined with funding shortages, the result is sluggish adoption of the highly anticipated technology, he said. 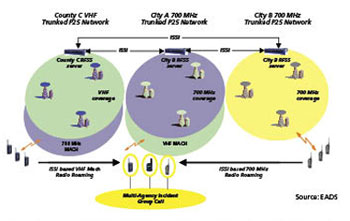 “I think, if it was infinite dollars, I think the consulting community and user community would say, ‘I don’t care. I want to have ISSI in there, I want to have interoperability, I want to have competition,” Shaughnessy said. “But in a world of constrained resources … [there is] some built-in resistance to the whole thing.”

Looking into a crystal ball

Of course, another potential factor in the future relevance of the ISSI is the proposed buildout of public-safety LTE networks and efforts to develop mission-critical voice applications over the broadband platform that eventually could replace traditional LMR narrowband systems.

If such a migration occurs in the near future, many industry observers believe an ISSI investment would be stranded, because it was not designed to operate in a broadband environment. On the other hand, as long as LTE and LMR networks operate simultaneously — something many analysts believe will be the case for at least a decade, if not significantly longer — then the ISSI could be a useful link between the disparate platforms, according to some industry sources.

With this in mind, both Motorola and Harris remain bullish on the long-term future of ISSI deployments.

“I’m sure, as we introduce more features [to ISSI], the interest will increase,” Muench said.

“As it becomes more ubiquitously deployed, you’ll start to have people realizing it’s there, it’s not that big of a deal to make it work, and it’s going to provide more interoperability than they had,” he said.