Interoperability software brings smart devices, LMR together in one platform (with related video)

Alert & Respond uses Covia’s DART (Dynamic Adaptive Run-Time) platform to enable interoperability. Specifically, the Covia Connector program runs at the OSI application Layer 7 — a normal application on smartphones, tablets and first-responder CAD systems — and then creates a Layer 8 connection platform that ties of the devices into a single interoperable network. (See more on the Covia Connector below.)

“At $30 per month, per device license, Alert & Respond allows public-safety agencies to affordably integrate all the extra capabilities found in smartphones and tablets,” CEO David Kahn said. “Adding first-responder smartphones to their network gives a public safety immediate access to all of the phones’ advanced features, including voice, video and GPS. 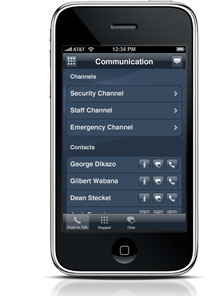 “Alert & Respond can also work in tandem with existing land-mobile radio [LMR] systems,” he said. “In this case, personnel would carry both a smartphone and an LMR. While there would be a single microphone interface for the two devices, the smartphone would be the primary communicator. It would defer to the LMR radio when the user was out of range of the LTE network; such as in the basement of a large building or in a remote area.”

Alert & Respond supports National Incident Management System (NIMS) administration, and provides push-to-talk functionality, message playback and talk-around capabilities (connections through other nearby wireless devices) when the user is out of range of a cell tower. The system will also track the real-time GPS locations of personnel, and geo tag all their communications.

“Alert & Respond has provided us with the means to better communicate when events are taking place within our jurisdiction,” Ron Levine, chief of police at Foothill DeAnza Community College — which took part in beta-testing the platform — said in a press statement. “For example, we had an event on campus with a major international political figure. Alert & Respond enabled all of our officers to have a comprehensive view of the security operations in real-time, while also intercommunicating with other federal and international security details operating at the event.”