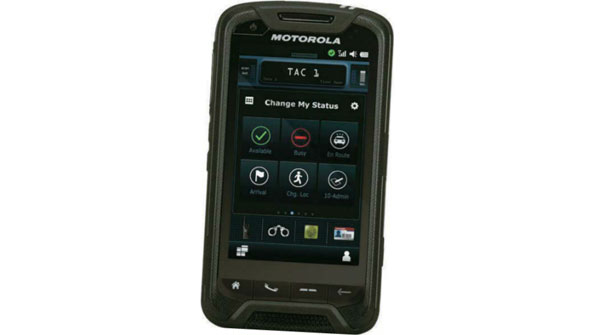 Demonstrated for the first time on the show floor at IWCE, the LEX 700 represents the culmination of three years of research and development, according to Bob Schassler, Motorola Solutions’ senior vice president of worldwide radio solutions.

“We’re ready to launch and release the first device of its kind.” Schassler said. “It’s really exciting for us to have the opportunity to be ready to launch it and ship it, because there’s been a lot of technology hurdles that the development-engineering teams have cleared to be able to get this product with six radios and eight antennas — a very sophisticated device that we’re ready to ship now.”

Indeed, the hardened device is designed to deliver data, images, video and voice over multiple networks—not only public-safety LTE, but also over 802.11 a/b/g/n Wi-Fi network and the Verizon Wireless LTE (Band 13), 3G EV-DO and 1xRTT systems. This high-speed connectivity over myriad networks is expected to provide public-safety users with the capability to use a host of broadband applications, from common tasks like identity verification and ticketing to being able to use real-time video and collaborative whiteboarding to coordinate the response effort to a large-scale emergency, according to company officials.

Driven by a 1 GHz dual-core processor, the LEX 700 includes an 8-megapixel camera and a color touchscreen display to support imaging and video applications.

In addition to its data functionality, the LEX 700 enables voice connectivity that leverages noise-canceling capabilities to enhance audio quality. Commercial telephony capability is enabled through the Verizon Wireless 2G network, while a dedicated push-to-talk button allows voice communication through a P25-LTE gateway.

Furthermore, the LEX 700 can be linked directly to a Motorola P25 radio, so voice communication can be made via the LTE or P25 network, depending on the circumstances and availability of each network.

Packaging so much versatility and feature functionality in a smartphone-sized device is “is just an unbelievable RF engineering feat,” said Shamik Mukherjee, senior director of solutions marketing Motorola Solutions.

Even with all of the high-speed data capabilities over multiple platforms, the LEX 700 is designed to operate throughout an entire shift on a single charge, said Darren McQueen, Motorola Solutions’ corporate vice president for private broadband, integrated command and control.

“The device is a little bigger than most smart phones, but only because we put a larger battery in it, to make sure it lasts a full 8-hour shift, versus my current Droid will die on me if I keep GPS on and Bluetooth at the same time over 4 hours, if I get a lot of texts,” McQueen said, noting that users will be able to hot-swap the battery and maintain functionality, if needed.