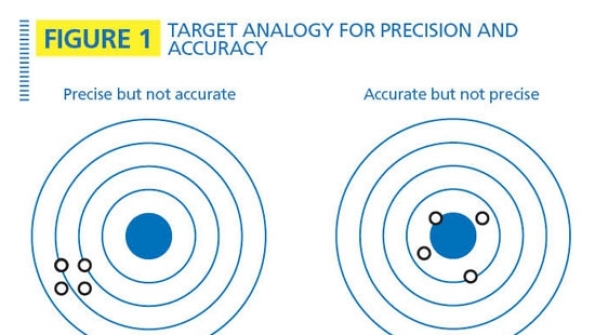 When accuracy isn’t all

When it comes to radio system measurement, there actually are three other important aspects — precision, reliability and traceability.

Metrology is the science of measurement and calibration is the means by which we ensure that the measurement is accurate. In land-mobile radio, we rely heavily on test instruments that are assumed to be accurate and consistent. These instruments include service monitors, spectrum analyzers, power meters, network analyzers, cable analyzers and multimeters. Proper and regular calibration is our insurance against inaccurate or unreliable measurements.

Accuracy defines how close the measurement compares to the standard. It is different than precision, which measures how close repeated measurements are to each other. One way to illustrate this difference is to use the target analogy shown in Figure 1, where the tight grouping on the left indicates good precision and poor accuracy while the grouping on the right indicates good accuracy and poor precision. In electronic measurement, an instrument with a bias error might achieve good precision after averaging a large number of samples, but the bias error always will result in poor accuracy. 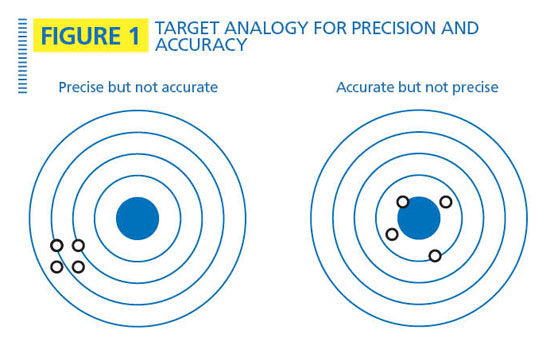 Reliability and repeatability sometimes are used interchangeably. For our purposes, reliability indicates the consistency of the measurement over time. Most spectrum analyzers with tracking generators, for example, have only mediocre amplitude reliability when compared with a power meter or network analyzer.

Standards. A standard is usually a device with known correctness by which other devices are compared. The meter is an example of a standard. The French invented the meter in the 1790s and defined it as 10-7 times the distance from the equator to the North Pole along a meridian through Paris. This definition was translated into the distance between two marks on an iron bar kept in Paris. Later, the International Bureau of Weights and Measures (BIPM) replaced the iron bar with one made of 90% platinum and 10% iridium. Because metal expands and contracts with temperature, the BIPM added a standard temperature, pressure and humidity to the standard. In 1984, the Geneva Conference on Weights and Measures redefined the meter as the distance light travels, in a vacuum, in 1/299,792,458 seconds with time measured by a cesium-133 atomic clock which emits pulses of radiation at rapid, regular intervals. So, the standard meter was originally a device (an iron bar), but is now a parameter (time) measured by a device (a cesium-133 atomic clock).

More on traceability. The BIPM defines traceability as “the property of the result of a measurement or the value of a standard whereby it can be related to stated references, usually national or international standards, through an unbroken chain of comparisons, all having stated uncertainties.” In other words, traceability is the methodology used to calibrate various instruments by relating them back to a primary standard. In the U.S., these standards are maintained by NIST and the sign of a good calibration is the phrase “Traceable to NIST” on the calibration sticker.

Test equipment specifications. To the consternation of engineers, salesmen help develop the data sheet for test instruments. This leads to the usual problems of specifying dB when it should be dBm, etc., but the salesman also is concerned that each of his specifications are as least as good as his competitor’s. This leads to some “specsmanship” where the specification does not mean what the user might think.

For example, spectrum analyzer manufacturers often specify the “dynamic range” (a misnomer) as the difference in dB between the strongest signal the instrument can measure without gain compression (the 1 dB compression point) and the displayed average noise floor. The tricky part is that the average noise floor is directly proportional to the resolution bandwidth, so two analyzers with identical noise figure but different minimum resolution bandwidth will appear to have different “dynamic ranges” when in fact they have the exact same ability to see weak signals.

Another area of frustration is measurement uncertainty. Manufacturers often will specify an amplitude error of say 1.5 dB, with no further explanation. Naturally, we want to know whether this is the standard deviation, 95th percentile or what? Also, what is the repeatability of the measurement? Does it drift by more than a few tenths of a dB in an hour? Rarely are these questions answered in the data sheet.