NIST was asked last year to study interference issues between firefighters’ PASS devices and other wireless devices, said Kate Remley, the NIST research scientist spearheading the project. Part of the study was to present test methods that manufacturers could use with new RF-based PASS systems to address interference to the NFPA Electronic Safety Equipment Committee for the next revision of NFPA 1982, Personal Alert Safety Systems.

“There are few standards available that tell firefighters when and where they can safely deploy these devices,” she said. “As with every wireless system, the technology won’t work in every situation so we are … developing methods so firefighters will know when they can expect PASS devices to work and in what situations.”

A big issue is that PASS devices use the same frequency as other applications, such as RFID, which can cause interference between the firefighter tracking systems and a commercial application. They have the same footprint in the frequency spectrum, Remley said.

Remley said as RFID becomes more popular for location tracking, or more present in warehouses or other buildings where a fire occurs, there is potential for significant wireless interference with PASS device alarms.

When signals are weak due to environmental or other conditions, a portable PASS unit’s receipt of an alarm from its base station becomes more likely to fail in the presence of only moderate RFID interference, she said. Delays sometimes exceeded a minute.

NIST recently submitted measures to the NFPA that address interference that are the “most important,” Remley said. That includes testing the signal attenuation — which replicates the reduction in signal strength as the firefighter moves inside and outside of a building. It also includes testing for RFID and all typical RF-interference sources a firefighter might encounter on the fireground.

“The methods helps test how resilient RF-PASS is against other unintentional RF sources,” she said. 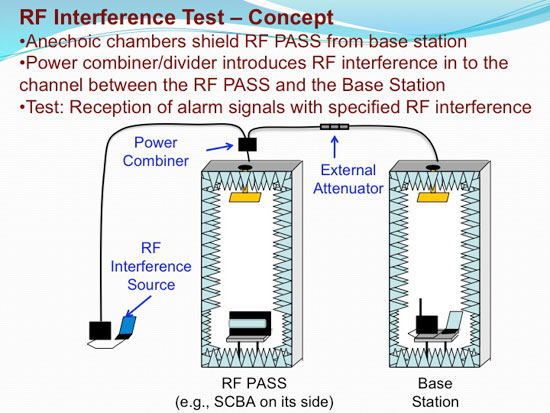 From a technologist’s perspective, Remley said the main concern is manufacturers’ development of RF equipment for firefighter applications, which are more specialized than those for the commercial sector. Specifically — unlike commercial applications, which have infrastructure like cell towers and commercial repeaters — each firefighter forms part of the network or point-to-point communications. The network is built on the fly.

“It is akin to some of the unlicensed wireless applications, like RFID set up in a warehouse where it is self-deployed,” she said. “That’s why there is … potential interference with those types of networks to the firefighting unit.”

Remley said the test methods were submitted for NFPA approval and should be included in the 2013 revision. NIST will continue to study RF PASS interference, including jamming from commercial systems at the or near the incident that can overload the radio equipment. Such test methods will be developed over the next five years, and then offered for consideration during the next NFPA’s revision cycle, she said.