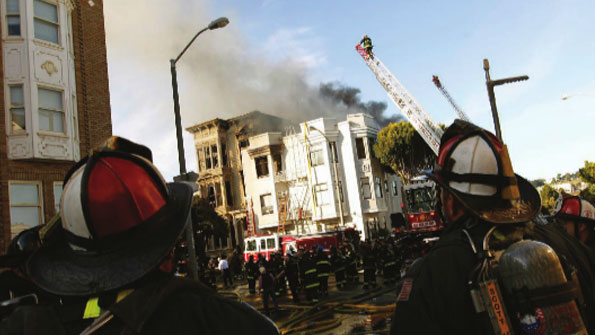 Despite some opinions, the nationwide broadband network that's coming to public safety will be just as important to fire/EMS as it is to law enforcement.

In April 1995, Oklahoma City's Alfred P. Murrah Federal Building was bombed, killing 168 and injuring more than 680 others. What made matters worse was the inability of public safety to communicate, which was so profound that information was passed by messengers moving from one end of the scene to the other.

Then 9/11 happened. The New York City police and fire departments couldn't communicate with each other on that day, because they were on disparate radio systems. Overloaded commercial networks prevented public-safety and government agencies from communicating. And the inability to share critical data — such as building plans — may have contributed to the deaths of many first responders and citizens.

"Oklahoma City really showed our vulnerability as far as interoperability, and then we saw it again on 9/11," said Bill Webb, executive director of the Congressional Fire Services Institute.

Public-safety agencies have lobbied the Federal Communications Commission and Congress ever since, asking for spectrum to build out a broadband network dedicated to first responders. After much debate, President Barack Obama in February signed into law legislation that reallocates the 700 MHz D Block spectrum to public safety and provides $7 billion in federal funding — mostly derived from the auction of other spectrum — to help pay for the build out of public safety's LTE network.

"So when you take it back to 1996, we've fought a lot of battles on Capitol Hill to bring this to fruition," Webb said. "To me, it is a monumental achievement. This was something big — really big — that happened for public safety."

As part of the deal, public safety must return its T-Band spectrum (470-512 MHz in 13 of the largest markets) within 11 years. The law also calls for the establishment of the First Responder Network Authority (FirstNet) within the National Telecommunications and Information Administration to oversee the network, including the creation of technical specifications to ensure interoperability.

What it really means, according to Webb, is that a backbone will be built that can support innovative technologies and applications from the private sector, which otherwise would be reluctant to invest the R&D money necessary to create public-safety-specific products.

"Now with the D Block, we have the means to develop state-of-the-art technology," he said.

While law enforcement has shown much excitement about the development, much of the fire service seems to be indifferent. Some believe that funding instead should be used for recruiting and retaining firefighters who have been laid off in droves during the economic downturn. Others question how they will ever be able to afford the technologies needed to take advantage of the network when they are short the funds needed to purchase the basics, like turnout gear and apparatus.

However, there are plenty of fire chiefs who advocate for commercial technologies to be made available to public safety, in order to provide better situational awareness. Among them is Jeff Johnson, CEO of the Western Fire Chiefs Association and former president of the International Association of Fire Chiefs. However, Johnson believes that many chiefs who are excited about these revolutionary changes are just as concerned about the logistics involved with having to give up the T-Band.

"[But] the trepidation in T-Band jurisdictions drops when [chiefs] become aware that the federal government will pay for the wholesale move to new spectrum," Johnson said.

Nevertheless, the concern about the loss of the T-Band is legitimate, because the LTE network will support data first and then later — likely much later — voice communications.

"This [network] will create the opportunity to have our public-safety radios on broadband, but I believe that is beyond the 10-year horizon," he said. "Even then, I believe it will be a choice. [But] there is virtually no effect on your local public-safety radio network you are using today for the foreseeable future."

Indeed, the most important aspect of the broadband network for the fire service, according to Johnson, is that chiefs and officers will be able to access the applications built for public safety that simply aren't available today. For instance, once the network is built, applications will be available on chiefs' public-safety-grade smartphones that will let them view situational awareness data. Users will be able to see building diagrams and GIS mapping data, as well as video feeds from traffic cameras to view the severity of an accident. Meanwhile, EMS will be able to transmit patient information, as well as health metrics, to emergency rooms and trauma centers, from the scene and while en route.

"Once you create that kind of functionality in the field, then we are going to see substantial innovation that follows that, and all those things will make us better in the field," Johnson said.

To prepare for the network, chiefs should start working with their regional partners to standardize their technology platforms to ensure interoperability across systems.

"Interoperability problems come from buying different systems and hooking them together," Johnson said. "We could save ourselves a lot of heartache and money if we standardize regionally our technology approaches."

The network also will change the way public safety shares data, on a two-way basis, said Mike Duyck, chief of Tualatin Valley (Ore.) Fire and Rescue. Duyck has worked alongside Johnson on lobbying for the D Block. He said that the spectrum reallocation was the one-time chance to gain enough spectrum to support public-safety broadband applications.

"The easiest way to explain it is if you lay two hoses on the fire scene, you won't get as much water through those two hoses that you would [using] a larger hose that would equal the smaller two," he said.

The analogy is apt. Because the 10 MHz of D Block spectrum will be paired with 10 MHz of 700 MHz broadband that public safety already had in its possession to create a contiguous 20 MHz block, the amount of data that will be pushed through the new broadband pipe will be exponential compared with what public safety experienced in the past. This capability will make possible all sorts of new capabilities for the fire service, not the least of which will be improved firefighter location and monitoring.

In addition, EMS will become a bigger priority for the fire service, because the broadband network will let firefighters-paramedics treat patients in their homes, transmit the data to a physician and then determine the best path for care — dubbed pathway management. This could save the healthcare industry significant money, Duyck said.

"If we have the ability to work with physicians through technology — a large bandwidth of spectrum that supports video conferencing with offsite physicians — and treat the patient at home, then deliver them to the right level of care, it will save millions of dollars," he said.The broadband network backbone also will support applications that would then let the fire service truly become a component of the health-care system, Duyck said. A side benefit would be that a department could bill insurance companies for services to generate revenue, he said.

"So far, I've heard some people say it can't work because the liability for [medical services] is so huge," he said. "If we have the ability to do telemetry to send vital-sign information and have a doctor through a smartphone or tablet with a camera talk to the patient like they are in the living room, the liability goes down."
Indeed, the network will provide the fire service with the opportunity to keep up with community expectations and technological change.

"Technology will evolve to be more robust," Duyck said. "Everyone will be using it and eventually [they] will be asking, 'Why aren't we?'"

In fact, the broadband network will act as a socioeconomic equalizer, predicted Charles Werner, fire chief in Charlottesville, Va., and one of the fire service's top advocates for the D Block reallocation. Once built, the network will bring the broadband connectivity to rural areas that don't currently have it, providing coverage in the areas where commercial providers would have not invested due to the low profit margin, Werner said. The benefit is broadband access not only for fire stations, but schools, hospitals and more.

"It will create the ability for public-private partnerships, which can expand broadband throughout the U.S.," Werner said.

The network also will let fire-service personnel access real-time information on their smartphones or tablets. In addition, long term it will support the two-way sharing of multiple types of data from 9/11 callers, to dispatch, to the field, to command and back to dispatch.

"It potentially gives me the opportunity to share information from the scene in the way of images, video or other information to an EOC on a larger scale event," Werner said. "So you are going to have this new framework that will provide information in multiple ways."

Ed.: An expanded version of this article appears in the May edition of sister publication FIRE CHIEF.