This week at the CTIA show in New Orleans, Polaris Wireless unveiled Altus Mobile, an application that lets law-enforcement personnel track suspects via their cellphone numbers or mobile equipment identifier — a 56-bit identification number that is burned into the device and is extremely difficult to modify. The application leverages Polaris’s Wireless Location Signatures platform, which simultaneously can locate all subscriber devices on a wireless network, both in real time and historically.

That means law-enforcement officers will know where a suspect is, where he has been and where he is heading at any given moment, said Mahesh Patel, Polaris’s senior vice president of products and technology.

“Previously, this information was available to them on their desktops through our Altus surveillance solution, but now officers can take this information into the field with them,” Patel said. “Real-time access to this kind of intelligence will be a big plus for tactical operations.” 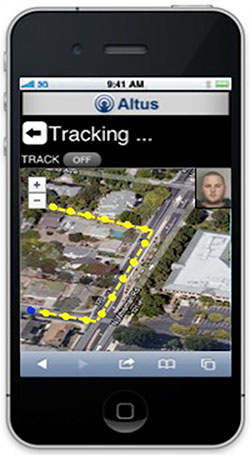 For example, during a stakeout, Altus Mobile would make it virtually impossible for a suspect to slip away from officers undetected, as long as he’s carrying his cell phone. If the suspect leaves his lair, detectives could follow at a safe distance because they can see the suspect’s movements and location on their device screens. Later— after the suspect meets up with other potential suspects — the officers could use their smartphones to take images that they would transmit to headquarters for processing through facial-recognition software.

Altus Mobile also can be used to create geo-fences, and authorities can be notified when someone enters or exits without permission. Also, this capability can be used for alerting. For example, let’s say that an airport receives a bomb threat. Altus Mobile could be used to establish a geo-fence around the airport and locate all subscriber units inside and outside the perimeter. Those inside would be given instructions on what to do while the threat is being mitigated — perhaps evacuation of the airport — while those outside the perimeter could receive an alert instructing them to stay away until further notified.

Another feature that Altus Mobile provides law-enforcement personnel is the ability to access preloaded images and other data about large structures such as airports, sea ports, train stations, stadiums and convention centers. If a suspect were to enter one of these, the pursuing officers likely wouldn’t be familiar with every nook and cranny of these large, incredibly complex structures.

“You don’t want to be surprised in such a circumstance,” Patel said. “If the officers can visualize their surroundings by accessing this information in real time, the better off they are.”

The application at this point only opens a gateway to a secure tunnel that leads back to the agency’s servers, where the platform actually resides. But Patel said a native version of the application is in the works.

“The advantage would be that the user could do more multi-tasking, with multiple screens open,” he said.

The application currently is available for Apple devices, with versions for Android and Windows devices targeted for the first quarter of 2013, Patel said.