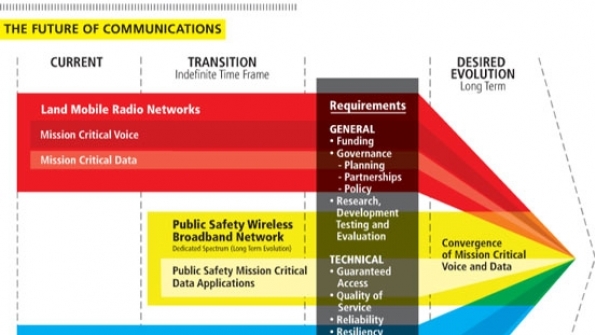 Like their forefathers more than two centuries ago, key public-safety communications officials are finding that working together can lead to greater resiliency, as well as lay a solid foundation for future endeavors.

Early last month, the city of Boston hosted three large celebrations. With hundreds of thousands of additional people flooding into the city, public-safety communications resources promised to be challenged.

It was the first major test of the Metro Area Simulcast System (MASS), which used an IP microwave link to merge Motorola trunking systems from the city of Boston and the commonwealth of Massachusetts in a project that was completed just the previous week, according to Donald Denning, the city of Boston’s chief information officer for public safety.

“The next weekend, we went into the largest multi-day event the city has seen in recent history, with the 200th anniversary of the War of 1812, Navy Week in the city and Boston’s Fourth of July all coming together,” Denning said. “We saw the largest day of radio system usage in the system on July 3—and the system performed flawlessly.”

MASS is just one of many public-safety-communications initiatives in the metro Boston area and throughout Massachusetts. But the development and execution of the six-month LMR-consolidation project follows an approach that is being adopted by the public-safety communications community throughout Massachusetts, as officials seek to upgrade aging legacy systems while laying the foundation for a broadband future during an era of tight budgets amid a slumbering economy, Denning said.

“We took the opportunity and the budget crisis that we’re all in—both the commonwealth and the cities—and said, ‘We don’t both need two 13-channel simulcast systems that have similar coverage between us. Why don’t we come up with a plan to merge the two systems together?” he said.

“Within five months, we merged our two systems. We have improved coverage. We have better spectral efficiency. And we came up with a joint governance policy for managing our system, and it was one of the first steps for the commonwealth to really cooperate with the locals.” 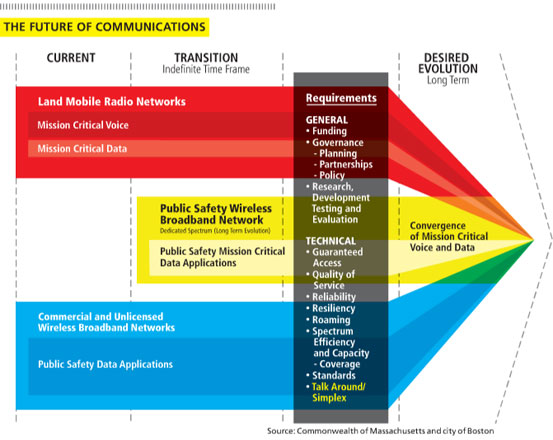 It certainly will not be the last time the state and local jurisdictions will partner on a project, because several other efforts—from LMR upgrades to interoperability to backhaul to broadband—are underway (see graphic). While these initiatives are the result of considerable planning, the urgency to accomplish themhas been enhanced by what Denning calls a “perfect storm” of circumstances that provide incentives for all parties to partner when possible.

Key factors include the fact that many communications systems are decades old and are reaching the end of their lives, with vendor support scheduled to end soon in some cases. In addition, there is a growing desire for various agencies to be interoperable, both for functional reasons and to gain access to additional funding through grant programs administered at both the federal and state level.

“We’ve told people, ‘If you show up as a single entity, you’re not going to get anything,’” said Gerald Reardon, chief engineer for the city of Cambridge, Mass.

But the biggest reason is that decision makers throughout Massachusetts have realized that only by cooperating with neighbors on projects can they afford to deploy the kind of systems that each jurisdiction wants, Reardon said.

“If you work cooperatively, and you pool some of the money, you can get farther and deeper and better than you could ever do on your own,” he said. “Cooperatively, you’ll have more capacity, more channels, more in-depth coverage than you can possibly ever do if you want to stay in that silo by yourself.”

Building better systems with enhanced capabilities and reliability may be the goal for some jurisdictions that otherwise would face limited options by trying to pursue projects on their own. However, for cash-strapped entities such as the state’s department of conservation and recreation (DCR), the need to partner with other jurisdictions on public-safety-communications projects is even more obvious, according to Kevin Tucker, the DCR’s park ranger captain.

Such cooperation is still a relatively new concept in Massachusetts. As in most of the United States, Massachusetts jurisdictions historically deployed public-safety communications systems on their own, with departments—for example, police and fire—often operating separate networks.

“The commonwealth of Massachusetts is a home-rule state,” he said. “So, you have 350 cities and towns that do their own thing. No one can tell them what to do, because they are home rule.

“This dates back to the day they came over on the Mayflower, and they didn’t want anybody telling them what they could do.”

Perhaps just as important, most entities did not share their public-safety communications plans with other jurisdictions. While the lack of cooperation at the time was partially attributable to a lack of trust between potential partners, many believe it was primarily caused by a lack of communication.

“Myth central—especially as it applied to my shop—was somewhat rampant,” said Blair Sutherland, communications director for the Massachusetts State Police. “The fact of the matter was, more often or not, we didn’t know what either a municipality or a regional system was looking to do.”

These circumstances led to inefficiencies and duplicative efforts, as each separate jurisdiction pursued its public-safety-communications initiatives independent of each other. In some cases, agencies purchased separate backhaul links from the same locations instead of agreeing to share a larger pipe, Denning said.

But perhaps the most notable issue was the fact that five jurisdictions located expensive LMR controllers within close proximity to each other—a circumstance that the entities have agreed to change when migrating to P25 technology, Denning said.

“You had four system controllers and one prime-site controller within a mile of each other,” he said. “If people wanted to migrate from analog trunking to P25, everyone needs a P25 core—but everybody doesn’t need their own P25 core.”

Many of these cooperative discussions occurred during meetings of the state interoperability executive committee (SIEC), which has become a forum for the exchange of plans and expertise for public-safety communications in Massachusetts. As well as tangible advantages such as cost savings, relationships forged through the SIEC and other groups have provided significant intangible benfits, according to Sean Hughes, CIO for the Massachusetts Executive Office of Public Safety and Security (EOPSS) . 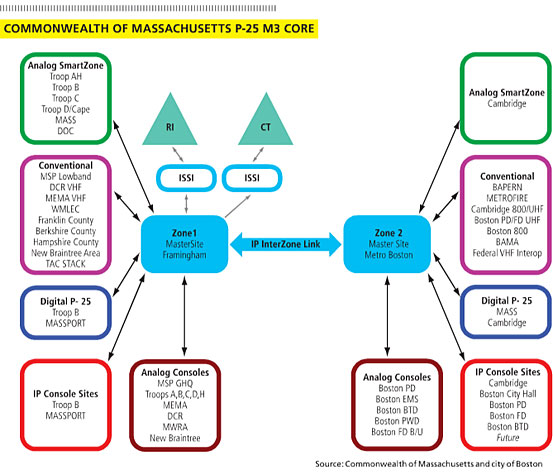 “Within IT in state government, we can lean on technical resources that the city of Cambridge may have, the city of Boston may have, and the Massachusetts department of transportation may have,” Hughes said. “We’ve done a lot more looking in the mirror and realizing where our weaknesses are, admitting to those weaknesses and moving to the partnerships that we have built to assist us.”

The SIEC also advises the state on which communications-related grant applications should be awarded funds, and the group has emphasized that all projects should fit into the state’s overall public-safety communications goals—not merely meet the current needs of a specific jurisdiction.

“Before we started to meet, most of us in our own silos didn’t know that someone else was trying to put up a microwave link,” Reardon said. “Now, we say, ‘Why put up another dish or something?’ We’d rather take that money and have the state police replace theirs with a digital microwave link with a lot of capacity. We don’t have to worry about reloading the tower and doing a lot of re-engineering.”

Backhaul to the future

One of the goals for the SIEC is to ensure that all Massachusetts jurisdictions have access to sufficient, resilient backhaul for the foreseeable future, including the integration of a nationwide LTE network for public safety.

The effort begins locally, where Boston and several other cities and towns have ordinances that require an enterprise laying fiber to also provide the city with “shadow conduit”—space within the conduit—or fiber stands for the city, Denning said. While this allows the city to secure fiber connectivity for little or no cost, the problem is that the enterprise may not be installing fiber in an area that is helpful to the city.

As a result, these efforts have to be supplemented with other broadband deployments. Where state or federal money is involved, the SIEC can make recommendations in an effort to ensure that a broadband project can help the state reach its long-term communications goals. 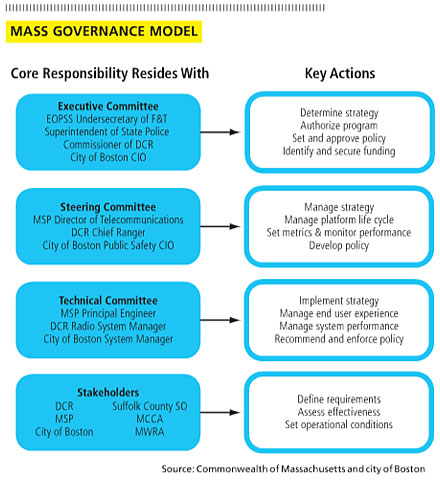 “We learned that lesson the hard way,” Denning said. “We put a link in between GHQ in Framingham and Boston police. They called it an underbuild, and it was an underbuild in more ways than one. It gave them enough bandwidth for the day, but the bottom line was that it wasn’t big enough to do what we wanted to do in the bigger project.

“Now, we don’t let little microwave hops get built. Our philosophy is that we’re putting in the biggest link that the atmosphere will allow us to carry in that distance. If the path survey shows we can carry 300 MB/s, we’ll carry 300. If it shows we can carry 3 GB/s, we’ll be putting a 3 GB link in. While we might not need it today, and we might not need it tomorrow, I can tell you that a year from now, we’re going to need more.”

This is especially true concerning the proposed nationwide LTE network for public safety, which will require significantly more backhaul for multimedia applications than existing voice-centric LMR systems require. Another aspect of this philosophy is that communications officials throughout the state have become aware of broadband backhaul links in Massachusetts, changing their perspective on the importance of looped connectivity that eliminates the potential for a single point of failure.

This mindset should help Massachusetts generate the backhaul needed to support a public-safety LTE network, regardless of how the system is architected or deployed, according to Jennifer Ball, EOPSS senior policy advisor for homeland security.

“I think having all of that before the D Block and before broadband is going to put us in a better position,” Ball said. “I think what it has allowed us to do is to leverage both funding and expertise.”

“If we’re at a moderate jog so far, then I think we’re poised for somebody to pull the starter’s trigger, and this thing could really take off. … We’ve already done a lot of prep to get ready for it. My sense is that we’re poised to continue on to even bigger and better opportunities.”