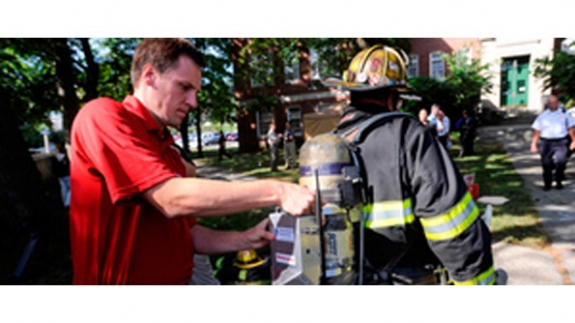 New tracking technology could be a lifesaver

A new location technology promises to keep tabs on firefighters, even in buildings.

"Location, location, location." The phrase long has been a mantra for success in real estate, but the ability to pinpoint the presence of a user or asset also has become the foundation for many of the most useful tools, technologies and applications in the wireless-communications sector.

From GPS personnel navigation to GIS mapping to AVL technologies, location represents some of the most valuable data transmitted and received over wireless networks, making myriad tasks easier to accomplish in a more efficient manner.

While these technologies all are extremely useful, none may be as valuable as the solution demonstrated this week in Massachusetts known as Geospatial Location Accountability and Navigation System for Emergency Responders, or GLANSER. Developed by Honeywell in cooperation with the U.S. Department of Homeland Security, GLANSER is expected to be the latest tool designed to address one of the toughest issues at a fire scene: determining the location of a firefighter in an environment of poor visibility and potentially collapsing structures.

By leveraging several types of location technologies — each with unique strengths and weaknesses — GLANSER allows the tracking of firefighters into a building. This has been a difficult challenge over the years, because GPS doesn't work well in buildings, and many in-building location technologies may be rendered inoperable because they depend on infrastructure that would be damaged in a fire scenario.

In addition, most location technologies only provide two-dimensional information, which has limited use when a first responder enters a multiple-story structure. Using a combination of air-pressure sensors, Doppler radar and mesh technologies, GLANSER also identifies the relative altitude of a firefighter.

"That ability to get that third-dimensional view of the building is truly the difference maker in this technology," said John Sullivan, deputy chief of the Worchester Fire Department, which participated in the demonstration.

Like most new technologies, GLANSER faces challenges, such as its initial price — $3,000 to $6,000 per unit, according to news reports. Hopefully, the technology used in GLANSER also can be leveraged in the consumer market, which would enable the component costs to drop dramatically, so that the solution can be offered at a price point that will allow it to be used globally, potentially saving the lives of both victims and first responders trying to save them.