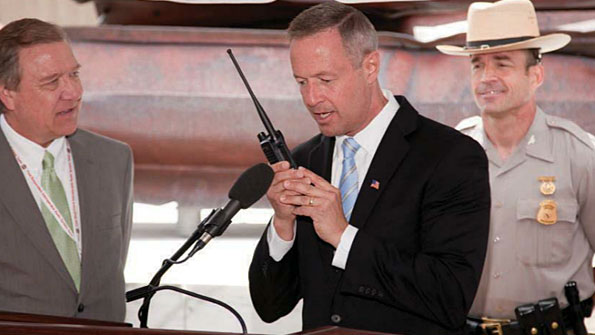 Homeland security in Maryland gets a boost

(Ed.: This article originally appeared in print as “A game-changer.”)

Rising more than 400 feet above the city’s Inner Harbor, the Baltimore World Trade Center is the world’s tallest regular pentagonal building. The landmark symbolizes the importance of commerce and trade to this port city for almost 300 years.

It also is the home to a memorial to the victims of the 2001 terrorist attacks on New York’s World Trade Center, the Pentagon near Washington and Flight 93 over Pennsylvania, which together claimed the lives of 68 Marylanders. The incidents of that horrible day influenced Maryland leaders to develop 12 Core Capacities for Homeland Security with the deployment of an interoperable communications system being the highest priority.

Maryland Gov. Martin O’Malley remembers that, on the day of the attacks, the New York City police department ordered officers out of the World Trade Center towers when personnel in helicopters flying overhead saw that the fire, smoke and heat in the buildings made the situation too dangerous. Meanwhile, the fire department was sending its crews up and into the buildings to fight the blaze and rescue office workers. Firefighters were not aware of the evacuation command, because separate radio systems prevented the police from warning them before the towers collapsed.

Lives needlessly were placed in jeopardy and lost on 9/11 due to the lack of communication among the first responders, according to Gov. O’Malley. That prompted Maryland to make an interoperable communication system the most important element of its homeland security plans.

Communication and the ability to access information quickly have a direct impact on how first responders execute their missions, by enhancing situational awareness and by aiding decision-making during a disaster. Without an interoperable infrastructure, events such as 9/11, the earthquake that rocked the Mid-Atlantic region last year, and the deadly derecho storms that ripped through the region in July — disrupting power and cell-phone services — can have a crippling effect on communities. Simply put, no single agency can address a major catastrophe by itself. Public-safety agencies must act as a cohesive unit during disasters, relying on each other for resources and expertise.

On June 5, 2012, Gov. O’Malley made the first call on the state’s new network, known as the Maryland First Responders Interoperable Radio System Team (Maryland FiRST), which was designed and installed at the direction of the Maryland Department of Information Technology.

The new network is designed to realize Maryland’s goal of providing a fully digital, secure trunked radio system that lets emergency responders transmit and receive both voice communications and data throughout the state. It will also extend O’Malley’s vision to make Maryland a national leader in homeland-security preparedness.

Maryland FiRST is the thread that links first responders and emergency personnel at the state and local levels. When completed in 2016, the system will have 165 tower sites across Maryland, providing 95% in-building portable coverage statewide. The state constructed most of the sites during the past decade in collaboration with county governments, which currently use them for local public-safety radio systems.

When county and local agencies join Maryland FiRST, they can use the system’s extra capacity for their own operations and for communicating with departments outside their borders. During disasters, any center on the system can dispatch first responders anywhere in Maryland, effectively providing multiple backup centers. County and local agencies only need to purchase consoles and radios to use Maryland FiRST, resulting in significant savings. They also may contain costs by avoiding the construction of separate towers at the same sites, and by sharing operations and maintenance fees with the state. 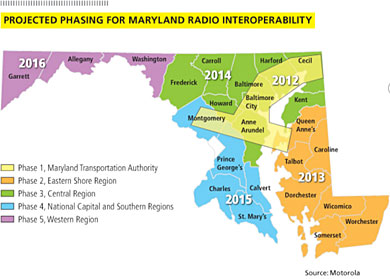 Maryland FiRST is being built in five phases. Phase 1 will provide coverage primarily along I-95, one of the nation’s busiest thoroughfares, where it goes through Maryland. One-third of the state’s estimated population of 6 million — as well as two-thirds of its critical infrastructure — is located near this corridor, which includes Baltimore-Washington International (BWI) Airport, Thurgood Marshall Airport, the Port of Baltimore, the Key Bridge, both tunnels under Baltimore Harbor, and the Chesapeake Bay Bridge. This initial phase, which has 23 tower sites, will be fully operational by the end of this year, when testing and user training are completed.

Construction begins next year on Maryland’s Eastern Shore, which comprises more than one-third of the state’s land area. Phases 3 and 4 will build out the system in the central and southern areas of the state, including the National Capital Region and the Washington suburbs. Maryland FiRST will be completed after the end of Phase 5, which will take place in the mountainous western part of the state.

Interoperability is the key reason that Maryland FiRST was created, but the network also addresses another technical challenge: narrowbanding.

The Federal Communications Commission (FCC) requires land-mobile radio users operating in the VHF (150-174 MHz) and UHF (421-512 MHz) radio frequency bands to migrate from 25 kHz systems to 12.5 kHz or narrower by Jan. 1, 2013. These bands currently are congested, because of the limited spectrum. More users can be supported with the additional channels that are enabled on narrowband systems.

Maryland FiRST is deploying one of the nation’s first Project 25 Phase 2 Time Division Multiple Access (TDMA) trunking systems, with Dynamic Dual Mode. This technology enables users to maximize current frequency allocations with a standards-based solution, while maintaining interoperability with other P25 systems. With P25 TDMA, public-safety agencies can double voice capacity within their fixed allocation of frequencies — potentially offering up to 30 voice paths at a site.

The Maryland Transportation Authority — currently on UHF spectrum — and Kent County, Md. — now using a VHF system — will be among the first agencies to join Maryland FiRST and use its narrowband capabilities in the 700 MHz spectrum to meet the FCC’s deadline. In fact, Kent County alone projects it will save $5 million by signing on to Maryland FiRST instead of reconfiguring its existing system.

In December 2011, the system’s components — including infrastructure, consoles and radios — were staged for testing and orientation purposes. Maryland officials were able to get hands-on experience with their new system before it was delivered and installed. This process helps reduce deployment costs and improve quality.

“This system is going to be a game-changer for the first-responders community throughout the state of Maryland,” Ray Lehr, director of Maryland’s Statewide Interoperability Executive Committee, said after seeing the new network staged. He added that the new interoperable system will make end-users’ jobs easier and, “most importantly, it’s going to make the folks on the street a whole lot safer.”