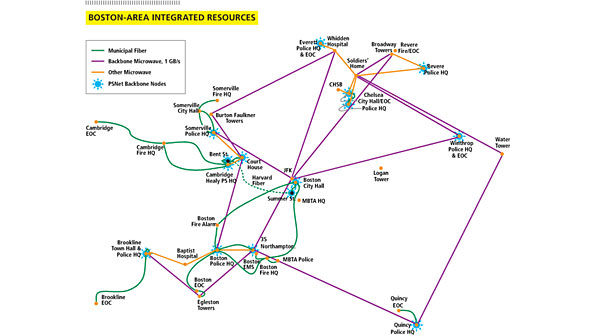 Myriad agencies pool their resources to create a high-capacity interoperable network that otherwise would have been unachievable.

(Appeared in print as "All for one, one for all")

A critical key to success for any wide-area communications project — regardless of modality — is the ability to interconnect physical locations with a robust, resilient, reliable and high-capacity network.

Many of the recent communications and data-sharing projects that successfully were undertaken by the commonwealth of Massachusetts and the communities in the Metro Boston Urban Area Security Initiative (UASI) would not have been possible without some unique approaches to create, combine, utilize and leverage many disparate pieces of individual networks into one large-scale, wide-area network.

The majority of states and local communities have networks, some large and some small. Some utilize commercial telecommunications providers, while others leverage private wired or fiber-optic infrastructures. Additionally, some communities and regions have installed both wired and wireless networks to support numerous homeland security projects.

In the Boston area, homeland-security funds were used to deploy a wireless communications network in conjunction with a wide-area camera network in the nine cities and towns that comprise the Metropolitan Homeland Security Region. Leveraging microwave technology, the network supports a phalanx of cameras that monitor major roadways that provide a substantial portion of the region's evacuation routes.

Meanwhile, a small group of very forward-thinking individuals began an endeavor to leverage local municipal networks to create a wide-area network for information-sharing between the agencies in the region. They did so by interconnecting "pieces and parts" of various municipal networks. Using advanced networking technologies, they created a network of networks that enabled the initial data-sharing between the regional partners. Working together, the network team and the camera teams were able to leverage additional homeland-security funding to upgrade some of the backbone microwave links, in order to add additional bandwidth to support sharing of video and information. This cooperative project was one of the major steps that created the Public Safety Network, or PSNet.

This unique and innovative approach to creating a wide-area network from other local networks yielded numerous benefits, some foreseen and others not. Regardless of who owns the physical interconnection medium, all interconnected agencies benefit not just from cost savings — by not having to pay for individual point-to-point connections — but also from higher interconnection speeds than they were getting from leased circuit connections.

One of PSNet's first applications was the connection of the nine communities in the region to the commonwealth's Criminal Justice Information System (CJIS). Previously, some major communities had the luxury of T-1 connections between their agencies and CJIS, but the majority of communities were connected by 64 kb/s frame -relay circuits. The commonwealth's Executive Office of Public Safety and Security, which is the parent agency of CJIS, always has been an integral partner in this endeavor. In addition to supporting local communities, PSNet provides networking interconnection between the commonwealth's chief medical examiner and its internal network. It also provides connection between the Massachusetts Bay Transportation Authority Police and CJIS.

The newest application that PSNet supports concerns the provisioning of backhaul for mission-critical voice systems. The city of Cambridge is in the process of deploying a Motorola ASTRO 25 simulcast radio system, which is connected to an ASTRO 25 Master Site Zone controller by diverse fiber and microwave connections provided by PSNet. Previously, the network provided IP backhaul service for certain limited radio deployments; now it provides backhaul services for both Cambridge's ASTRO 25 simulcast system and Boston's mission-critical radio console network.

In addition, both cities have ordinances or regulations in place that require any contractor wishing to install subterranean conduit for telecommunications purposes to also install additional capacity for municipal use. The term usually used to reference this additional capacity is gshadowh conduit. The commonwealthfs Executive Office of Public Safety and Security (EOPSS), as well as officials in Boston and Cambridge, saw advantages to installing private fiber within the loop that encircles the two cities. Working cooperatively, they were able to leverage each cityfs local regulations and a shared funding model to install a substantial fiber capacity within this loop to the benefit of all partners.

Shortly after the installation of fiber into the loop, the EOPSS and the Massachusetts Department of Transportation (MassDOT) were able to leverage the Department of Commercefs Public Safety Interoperable Communications (PSIC) grant program to design and interconnect a large number of transportation operation centers via a high-speed fiber-optic network. This PSIC-funded project was dubbed METFON (Metropolitan Emergency Transportation Fiber Optic Network). A description of the initiative, taken from the Mass.gov website, is as follows.

"METFON is a consortium of state transportation and public-safety agencies and authorities [that] pool their fiber and other communication assets to form a high-speed, secure statewide fiber-optic communications network. This project will allow every major transportation and public-safety control center in the Metro Boston area to be linked together to share real-time data, video and information regarding an escalating incident.

"It will also provide infrastructure to link public-safety control centers along the [Massachusetts Turnpike] and in Western Massachusetts to the network. This vital network will link essential elements of the existing public-safety and transportation infrastructure. The result will be shared communication and faster response times, and a safer, more effective transportation system."

The METFON project was able to utilize the fiber previously deployed and installed by EOPSS into the loop as the base to connect numerous local and state facilities.

Using some of the key lessons learned from METFON and PSNET, a new broader and higher order of thinking has taken control of many decision processes that previously would have been approached myopically. For example, when designing microwave or fiber links, the commonwealth and local jurisdictions regularly work together, both financially and operationally, to maximize the available bandwidth and functionality of any potential pathway.

Looking to the future, the communities of the Metro Boston UASI have targeted funding to incorporate additional microwave links to support both circuit-switched link and IP capacity to the benefit of the region and commonwealth partners.

Collectively, all of these projects have been able to interconnect local, state and federal agencies with a robustness, resiliency and capacity that never could have been achieved individually.

Donald Denning is the public safety CIO for the city of Boston, and is a member of UCfs editorial advisory council.

Ed.: In the August issue, UC Editor Donny Jackson provided an overview of the vast regional communications planning initiative currently underway in Massachusetts, in the article entitled "Strength in Unity."