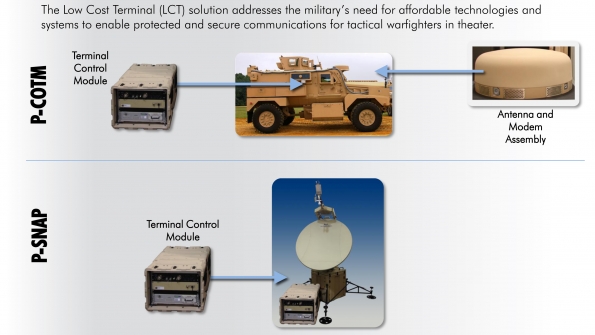 Two types of terminals were developed. The P-SNAP — Protected SIPR/NIPR Access Point — uses a dish antenna and is designed for fixed locations; and the P-COTM — Protected Communications on the Move — uses a low-profile, vehicle-mounted antenna and is targeted for mobile operations.

Both operate on the U.S. military's Milstar and AEHF — Advanced Extremely High Frequency — satellites that feature anti-jamming technology. The devices themselves also are highly resistant to jamming.

"It has to do with both the waveform that the satellite uses and the fact that it is a frequency-hopping system that basically operates similar to a ground tactical radio," said Gasper Gulotta, TCS' senior director of professional services. "It moves through the frequencies very quickly, which makes it almost impossible to jam it, unless you have a very, very broad frequency jammer with a lot of power — which we haven't seen."

The data terminals currently used by the military for field operations often leverage commercial satellite networks, which are prone to disruption, according to Gulotta.

"All you need is an enemy that is sophisticated enough, or perhaps well-funded enough, to jam those signals," he said, adding that the commercial operators have experienced this phenomenon to such degree in some regions of the world that it seems jamming their signals is as simple as flipping a switch. "We can only guess as to how much that vulnerability is being experienced by the military."

While there is a significant need for data terminals in military theaters of operation, they typically are found only at brigade headquarters and other key facilities due to their cost, according to Gulotta. However, TCS, Lockheed Martin and Northrop Grumman found a way to develop a low-cost terminal (LCT) that is much less expensive than the data terminals that currently are fielded, he said.

"We call this an 80% solution at 10% of the cost," Gulotta said. "These terminals are built to work cooperatively with existing systems. They don't do it all. Primarily, that means the software is not the full complement of software that some of the more expensive systems have. So, these terminals would be considered member terminals of a network, rather than the network operator — they don't set up the network, they join the network."

The project began four years ago, when the military approached Lockheed Martin and Northrop Grumman to develop a P-COTM capability. The two companies approached TCS 18 months ago, because of the company's experience with very-small-aperture-terminals (VSATs) as well as SNAP technology, according to Gulotta.

"We have about 800 [commercial] VSAT terminals already deployed across the world, and a very robust logistics team that services them. … [Plus] the military already was using our SNAP terminal, which they were very happy with," said Gulotta, who added that creating the low-cost terminal was simply a matter of reengineering its SNAP terminal to work with the components that Northrop Grumman and Lockheed Martin already had created.

The LCTs currently provide data speeds up to 1.5 MB/s — comparable to the data terminals the military currently uses, Gulotta said — but an upgrade kit is available to boost data speeds as high as 8 MB/s. The devices can be hooked up to cryptographic equipment to transmit and receive classified traffic.

The next step is to field test the prototypes, which only have been tested under factory loads so far, according to Gulotta.

"The one thing that we have not done is test over the open air," he said. "In order to do that on a protected terminal, you have to have an interim authority to test from the National Security Agency. To do that, you need a military sponsor to come forward with a mission and a need. … Right now, we're looking for that military customer that will step up."

Although the Army has expressed a need for protected communications on the move, the money to move forward with the project is lacking at the moment. According to Gulotta, there's no time to waste.

"We don't want to wait until our forces get into a very-denied electromagnetic environment before we figure out that we need to deploy more protective communications," he said. "Let's realize that threat is there now, and let's prepare for it. We've done this at a very low cost to enable that to happen, even in a very tough financial environment like the one we're in now.

"The time to figure out that you need a new acquisition program is not when you're in the midst of a catastrophe. The jamming threat is real, we know it's real, and we think keeping a system like this — which costs one-tenth the price of a traditional terminal — moving through the certification process makes good sense."